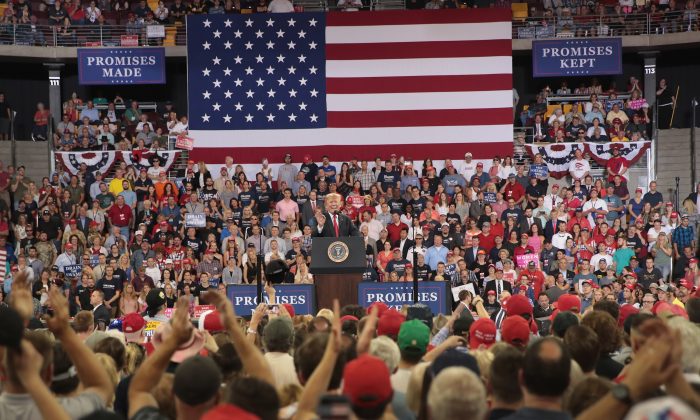 President Donald Trump speaks to supporters during a campaign rally at the Amsoil Arena in Duluth, Minnesota on June 20, 2018. (Scott Olson/Getty Images)
US Features

A single letter has begun appearing on billboards near highways across the United States and on t-shirts at Trump rallies, and it has become an internet sensation among many conservatives.

“Q” represents a mysterious individual, or group of individuals, who began in October 2017 posting online updates on secret actions allegedly taken by the Trump administration to purge corruption from the United States and the world.

Most of the mainstream news outlets have written Q off as a conspiracy theory, but the constant barrage of anti-Trump articles and newscasts have damaged these outlets’ credibility with Q’s constituency. The claims have done little to stop the momentum of the growing movement.

The Q posts began on the 4Chan message board, known for its absence of censorship—in ways both good and bad—but later moved to a similar board on 8Chan for alleged security concerns. The posts also appear regularly under the #QAnon hashtag on Twitter and are a topic of coverage for many conservative YouTubers. Even celebrities such as Rosanne Barr have commented on the Q posts.

If the Q posts are real, they may indicate that the Trump administration has established an alternate channel to speak to supporters, bypassing news outlets and social media altogether for something more direct. The validity of the channel has not been confirmed or denied by the administration.

Q followers say that the connection of the Q posts to the Trump administration has been provided through the cross-posting of keywords with President Donald Trump’s Twitter account.

To gain a deeper insight into this phenomenon, I contacted the moderator of a private Q discussion group on Facebook. The individual is a former U.S. government security adviser, but asked to not be named out of concern he would be attacked by leftist groups.

He said Q represents alleged updates on the promises made by Trump from the beginning of his campaign to “drain the swamp” by purging corruption, expose the “fake news media,” and stand up to globalist and special interest groups.

The moderator pointed to a video from one of Trump’s early rallies, which he said fairly sums up the nature of the Q posts. In the video, Trump said, “Our movement is about replacing a failed and corrupt political establishment, with a new government controlled by you, the American people.

“The Washington establishment, and the financial and media corporations that fund it, exist for only one reason: to protect and enrich itself.”

Trump then went on to explain the relations between global special interest groups, major news outlets, large corporations, and political corruption. He said that his campaign “represents a true existential threat” to this corrupt system, and, addressing Americans, said, “We will take back this country for you, and we will make America great again.”

According to the moderator, the analysis and insight in the Q posts are among the more significant parts for those who follow them. He said many of the predictive posts are “always well-timed, always on the ball, and so far always correct.”

Many Q posts are written as somewhat coded messages, which can be interpreted in many different ways, and allude to alleged actions of the Trump administration to meet these promises.

The posts have their own code words, where “BHO,” for example, is used instead of “Barack Hussein Obama,” “BC” instead of “Bill Clinton,” and so on. The posts often point to incidents that have taken place and give context to those incidents, and also give leads on incidents that are unfolding or allegedly are still to come in the near future.

The moderator noted that this method of providing information to the general public makes sense from the perspective of U.S. intelligence agencies, since by alluding to information using keywords and leads—rather than through direct explanations—it likely wouldn’t violate laws on leaking classified intelligence.

Many of the Q posts are also based on open-source information so that people following them can themselves do research and draw their own conclusions; others that are predictive or based on alleged classified information take more of a leap of faith.

If it is true that corruption has found its way into U.S. politics, intelligence agencies, legacy news outlets, and other groups, the moderator said, then in this context, it would make sense that the Trump administration would open an alternate channel to communicate with Americans on how it is cleaning things out.

There are many theories on who is behind Q. Among the more common beliefs is that Q stands for Q security clearance, the highest level of clearance within the Department of Energy. Others believe it refers to “Q” from the James Bond films, a figure who supports Bond as he fights a global corrupt shadow group. The moderator, however, believes Q refers to “Quartermaster” and that it could refer to any leader in the Trump administration.

He said, “Q is the quartermaster of America.”

He pointed to a series of quotes from America’s founding fathers. These include a quote from Thomas Jefferson stating, “If we are to guard against ignorance and remain free, it is the responsibility of every American to be informed.” Another, from George Washington, states, “Truth will ultimately prevail where there is pain taken to bring it to light.”

“Those quotes are exactly what Q is all about,” the moderator said. “We need to wake people up.”

He noted that it’s difficult to turn on news channels these days such as CNN for even five minutes without hearing something negative against Trump, and that in this context, “maybe [Trump] and some people around him decided they wanted a backup channel from Twitter and Facebook, and Q is the backup.”