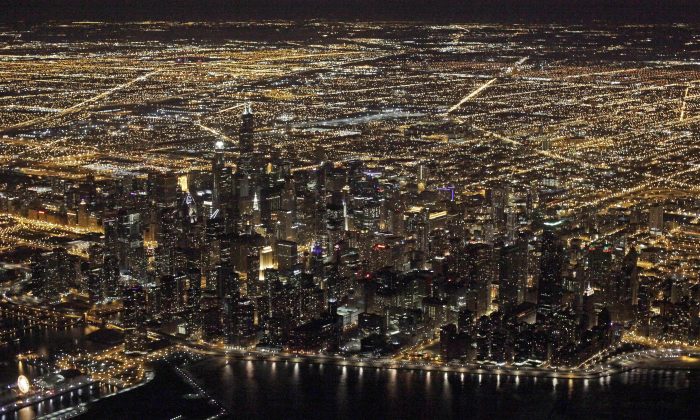 The Purge 2 ‘Anarchy’ Hoax: 112 Dead in Chicago Article is Fake; Purge No. 2 to Planet of the Apes at Box Office

It was posted on Cream BMP Daily, a “satire” news webiste. The article about “The Purge” got more than 100,000 “likes” and shares on Facebook before it died down.

According to the site’s disclaimer, it’s not real and shouldn’t be taken seriously.

“CreamBmp.com Written by comedian CREAM. This website is comprised of satire and parody of current news and urban culture. For entertainment purposes only,” it says

NEW YORK (AP) — The summer box office continued to lack mojo, as the R-rated “Sex Tape” failed to turn on moviegoers over a weekend where “Dawn of the Planet of the Apes” maintained its rule.

20th Century Fox’s science fiction sequel outmuscled a trio of new films to top the North American box office for the second-straight week with $36 million, according to studio estimates Sunday. The acclaimed sequel to 2011’s reboot of the chimp franchise has now made $139 million domestically in two weeks.

Its closest completion over the weekend was the home-invasion horror thriller “The Purge:Anarchy,” written and directed by James DeMoncaco. Universal’s low-budget sequel to last year’s surprise hit, “The Purge,” opened with $28.4 million, down from the $34.1 million the original scared up on opening weekend.

Nikki Rocco, head of distribution for Universal, though, noted the stronger competition this time around and the overall “depressed” business at movie theaters. Weekend revenue was down 24 percent from the same weekend last year, continuing a cold summer for Hollywood that’s more than 20 percent off the pace of summer of 2013.

But “Anarchy,” which imagines an America where all crime is legal for 12 hours every year, was made for only $9 million, making it immediately profitable for Universal. Such success is the envy of most movies, particularly Sony’s “Sex Tape,” a starrier, more expensive release made for about $40 million that opened with $15 million.

The Jason Segel, Cameron Diaz R-rated comedy failed to entice moviegoers or critics. “Sex Tape,” in which a married couple makes a pornographic home video to stoke the flames of their lagging sex life, came in fourth place behind Disney’s “Planes: Fire & Rescue.” The animated sequel to 2013’s “Cars”-offshoot, “Planes,” opened with $18 million.

“It was kind of a middling weekend unless you were the top film,” said Paul Dergarabedian, senior media analyst for box-office tracker Rentrak. Dergarabedian looks ahead optimistically to upcoming releases “Lucy,” starring Scarlett Johansson, and the Marvel space film “Guardians of the Galaxy,” of which he noted: “A lot of pressure is being put on that movie. It may be the last big summer blockbuster.”

But as July turns to August, Hollywood’s summer is certain to be a down one.

In a limited release of 68 theaters, Zach Braff’s crowd-funded “Wish I Was Here” also arrived with a tiny weekend opening of $495,000 for Focus Features. The film, Braff’s directorial follow-up to 2004’s “Garden State,” was much criticized for depending on fan contributions for funding. “Wish I Was Here” will expand to more theaters next week, but it will fall far short of the $26.8 million “Garden State” earned.

Estimated ticket sales for Friday through Sunday at U.S. and Canadian theaters, according to Rentrak. Where available, latest international numbers are also included. Final domestic figures will be released on Monday.