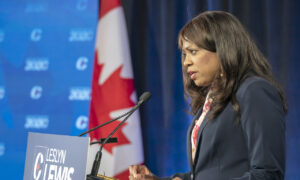 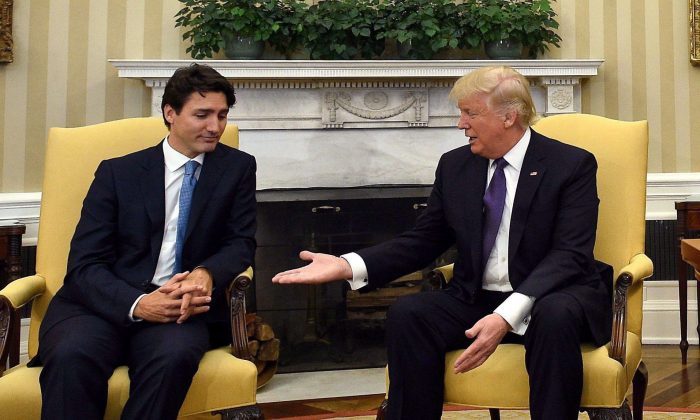 NAFTA was among the issues discussed when Prime Minister Justin Trudeau met with U.S. President Donald Trump in the Oval Office of the White House in Washington, D.C., on Feb. 13, 2017. The existence of the trade agreement is now in the balance. (The Canadian Press/Sean Kilpatrick)
Canada

The Pros and Cons of NAFTA

Experts weigh in on the possible loss of the trade deal

With the Trump administration continuing to threaten to tear up the North American Free Trade Agreement, some Canadian trade experts say scrapping the 23-year-old deal and going back to previous trading methods with the United States could benefit Canada economically.

On the heels of reports that it took a last-minute intervention by Prime Minister Justin Trudeau to persuade President Donald Trump not to pull the United States out of NAFTA last month, new concerns were raised May 8 when Trump’s team said a withdrawal from the deal is still on the table.

But as far as trade expert David Orchard is concerned, calling the Trump administration on its bluff and going back to pre-NAFTA multilateral trade agreements under the World Trade Organization and the Canada-U.S. Free Trade Agreement before 1994 may be in Canada’s best interests in the long term.

“We’re down on our knees right now and the Americans are saying they are either going to renegotiate NAFTA or cancel it, and Ottawa is pleading with them to keep it,” said Orchard, a former Progressive Conservative leadership candidate and fourth-generation Saskatchewan grain farmer.

“That’s a position of weakness, so when we sit down with the Americans they are going to ask for more and we’re already getting swindled under the agreement in the first place.”

Orchard, who is the author of “The Fight for Canada: Four Centuries of Resistance to American Expansionism,” said NAFTA has already been an unfair deal for Canada and now, Trump is using scare tactics to position the United States to squeeze more out of Canada economically, especially in the resource sector.

Since 1994 under NAFTA, said Orchard, 12,000 Canadian companies have been taken over by American corporations—everything from Hudson’s Bay to Eaton’s to our two national railways, CN and CP. As well, he blames NAFTA for the dismantling of the Canadian Wheat Board and the grain industry subsequently being sold off in part to U.S. and Saudi Arabian corporations.

“Tim Horton’s is supposed to be a Canadian icon but it was taken over by Wendy’s and resold again, but these American corporations don’t want Canadians to know it’s not a Canadian company anymore,” he said.

Orchard also believes Canadians have been given a raw deal on the development and selling of its natural resources, such as the softwood lumber fiasco and unfair deals in the oil and gas sector. He said Canada sends 60 percent of its oil south of the border as a proportionality requirement and for some of the lowest royalty and profits compared to global pricing.

Critics of NAFTA also point to the legal controversies of some of the fine print in the agreement, which has been a boon for at least one group: lawyers.

Gus Van Harten, a professor at York University’s Osgoode Hall Law School, has studied extensively the contentious NAFTA dispute settlement process found in Chapter 11, which allows Canadian, Mexican, and American corporations the right to sue governments that interfere with investment. He notes that Canada has lost nearly half the time when foreign investors sue it, while the United States has never lost.

“If NAFTA were to be terminated there’s certainly a silver lining,” Van Harten said. “Our sovereignty would be once again freed from the unfortunate constraints of Chapter 11, which is about protecting property rights for wealthy foreigners and multinational corporations.”

A study Van Harten conducted found American companies have been able to intimidate and pressure the Canadian government, with at least 40 government officials admitting they were influenced in policy-making and important decisions to give more consideration to foreign investors.

However, Van Harten made it clear dismantling NAFTA would be a complex task considering how much the agreement is embedded in the way business is done between the three countries, adding that U.S. industries have a lot to lose so the Trump administration would be wise to act with caution.

Economists and governments have mostly touted NAFTA as being beneficial in growing the economy of all three nation states, with Mexico benefiting the most.

According to Global Affairs Canada, exports to the United States have grown at an annual rate of 4.6 percent and NAFTA partners now account for one-quarter of the world’s GDP, despite having only seven percent of its population.

“I think ultimately the benefits have been more specialization and lower prices on goods,” said John Reis with the Sauder School of Business at the University of British Columbia.

“When you look at automobiles or electronics there’s a very sophisticated production chain in North America that has allowed us to produce goods at a lowest possible price.”

For the livestock industry in Canada, NAFTA has provided more access to the market on a larger scale in order to sell more.

According to Ron Davidson, senior vice-president for International Trade and Public Affairs at the Canadian Meat Council, the pork and beef industries have seen their exports triple to $3 billion under the agreement.

“We’re too small a consumer population to consume the agricultural products that we produce in this country,” he told CBC Radio. “But through NAFTA we are able to obtain the scale by working with the United States and Mexico to be competitive for all three countries in the international marketplace.”

Merchandise trade between the three countries came to $1 trillion between 1993 and 2015, according to Global Affairs Canada.

Reis said if NAFTA is terminated there could be unintended consequences, the most significant being how Canadian businesses have come to depend on free trade. The two economies have become more entwined, he said, with three-quarters of Canada’s trade going south of the border.