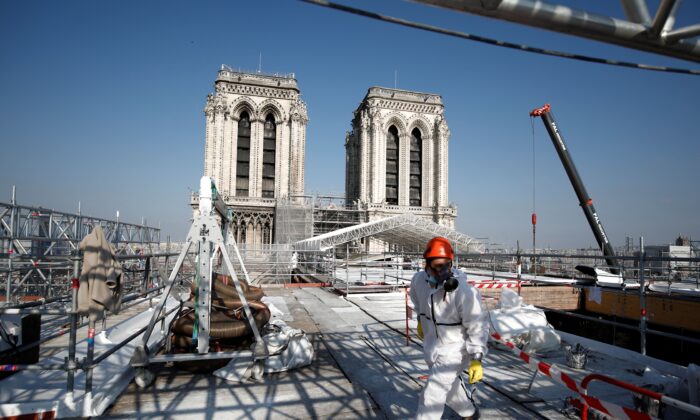 A worker walks on the roof of the Notre-Dame de Paris Cathedral two years after the blaze that made the spire collapse and destroyed much of the roof, in Paris on April 15, 2021. (Benoit Tessier/POOL/AFP via Getty Images)
Viewpoints

There is something piercingly and hauntingly disturbing about the just-revealed proposal for the renovation of Paris’s Notre Dame Cathedral, which was badly damaged by fire in April 2019.

What is proposed is a horrifying conversion of one of the most illustrious and historic churches in the world into a theme park, a showcase for meaningless woke perversity. Confessionals and altars will be replaced by murals with “son et Lumiere” treatment of various sensations, with panoramas of film and narrations in many languages including Mandarin, interspersed with “emotional spaces.”

There seems to be some confusion, rooted in the several appropriations of church property in French history, over the ownership and ultimate authority over the 850-year-old cathedral, but the French government has committed to restore the Cathedral to the Roman Catholic Church and enable the first service in the renovated building on April 25, 2024, just before the opening of the Paris Olympics.

Hundreds of millions of dollars were spontaneously offered from all over the world to help restore the cathedral, and it’s inconceivable that the ambition of most of the donors was anything but the most exact possible restoration (with modern safety and structural improvements) of one of the most revered, illustrious, and historic buildings in the entire world, essentially as it has been known for many centuries.

Notre Dame was built as a medieval church of consecration and departure for authentic crusaders: brave men seeking not to pillage the Middle East but to liberate what until recent times has been known as the Holy Land from those who would desecrate and abominate Christianity.

In the 12th century, Notre Dame was as great an undertaking as was St. Peter’s Basilica in the 16th and 17th centuries. The cornerstone was laid on April 25, 1163, in the presence of King Louis VII and Pope Alexander III. King Louis IX deposited at Notre Dame the Crown of Thorns, and a piece and a nail from the original cross.

From its Crusade-sponsoring origins, Notre Dame graduated to be the mother church of France, gracefully and even imperturbably surmounting all the upheavals of French history these 850 years: the Hundred Years War; several prolonged civil wars; the revolutions of 1789, 1794, 1799, 1814, 1830, and 1848; the bloodbath of the siege and the Paris Commune of 1870–1871; the mighty struggles of the World Wars; and the liberation of Paris.

Notre Dame passed into the literature of France early and often and most celebratedly in Victor Hugo’s most famous novel. In plaques on its walls and inlaid remembrances on its floor are remembered many of the greatest figures in French history in every field.

Its two Great Bells (named Emmanuel and Marie) are rung only on the most momentous of occasions: in the past 120 years, only on the effective surrender of the German army to Marshall Foch on Nov. 11, 1918, which the world still celebrates; the Liberation of Paris on Aug. 25, 1944; the fall of the Berlin Wall in 1989; and the terrorist attacks on the United States on Sept. 11, 2001.

On the day following the liberation of Paris in World War II, when 5 million Parisians greeted Gen. Charles de Gaulle, whom they had only known from the airwaves, German snipers were in the rafters as de Gaulle and other eminent Parisians arrived for a service of thanksgiving. De Gaulle famously said, in reference to the many congregants squatting on the floor, “I see more asses than faces.”

Next to St. Peter’s Basilica, Notre Dame is probably rivaled only by Westminster Abbey as the most historic Christian edifice outside Israel, and it has no rival as the most richly historic building in all of France. It received an average of a million visitors from elsewhere than Paris every month for more than a century prior to the 2019 fire, and was the scene of Napoleon’s marriage and of the funerals of most French kings and presidents.

Nothing, however, has probably prepared it for its proposed conversion into a near-Disney humanistic theme park. The early French reaction has been very censorious. One critic asked, “Can you imagine the Holy See allowing something like this in the Sistine Chapel?”

The proposal has generally been denounced as a politically correct and childish act of desecration, if not heresy. To be fair, an authentic Roman Catholic Church spokesman has been found to claim that the proposed renovations will make the cathedral more accessible and understandable to a greater range of people.

More representative was the charge that “this is political correctness gone mad.”

“They want to turn Notre Dame into an experimental liturgical showroom that exists nowhere else, whereas it should be a landmark where the slightest change must be handled with great care,” another critic said.

Presumably, the French church and government will concert to produce a more sober application of new media and faddish terminology than has been outlined in the initial description of the proposed renovations. It’s inconceivable that this great monument to Christianity could be transformed into the juvenile, animated feel-good center that has been suggested.

But this suggestion in some way symbolizes and illustrates the ordeal of the contemporary church, and of Western religion generally. In this era of maximum secularization, subjectiveness, materialism, vulgarity, and self-exposure, religion is a concept that has been under constant threat and denigration, even if only implicitly.

Freedom of religion has been reinterpreted to allow for shutting houses of worship for reasons of spurious public health considerations, and religious practice has been culturally discouraged by widespread implicit insinuations that it’s primitive, ignorant, and demeaning to human dignity to imagine that there are any spiritual forces in the world that represent commendable ideals and that can be propitiated.

Separating church from state in practice almost always means the suppression or at least discouragement of religion by the state. Regular attendance at houses of worship has in these circumstances inevitably declined. So have declared religious affiliations, but the percentage of people declaring that they have some religious convictions and do believe in some other intelligence abroad in the universe apart from that of people and other terrestrial creatures, has remained relatively high.

People generally don’t accept that every definition of God is dead and that the resulting vacuum can believably and adequately be filled by humans. But the Western world isn’t so disillusioned with the failures of the anti-theists trying to stamp out any intellectually respectable notion of a divine intelligence that it’s flocking back to the faiths that it knew.

The solid majority retain their belief in some notion of the divine, of spiritual forces, and, ultimately, that there was originally some sort of a creation and that some living force must have had some responsibility in it. The terrible scandals, so long concealed, of clerical abuse of children and religious novices have naturally added to the discomfort of the churches.

But the churches, and the Roman Catholic Church as the premier Christian organization, have survived that, as they have survived terrible oppression and appalling exposés in times past of their own corruption. There is something in the fire at Notre Dame and this proposed absurd reparation of it that is vaguely reassuring.

While these events highlight the travails of that timeless and imperishable institution, the Roman Catholic Church, there is in this minor controversy the indication that there is a bedrock of belief and that respect exists. Like the religious impulse itself, it can never be extinguished, no matter how it is disparaged and disserved. Faith in God lives, and while a focused concentration of belief is unfashionable, it’s also irrepressible. Fire destroys, but it also purifies.