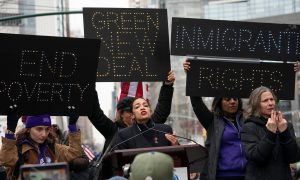 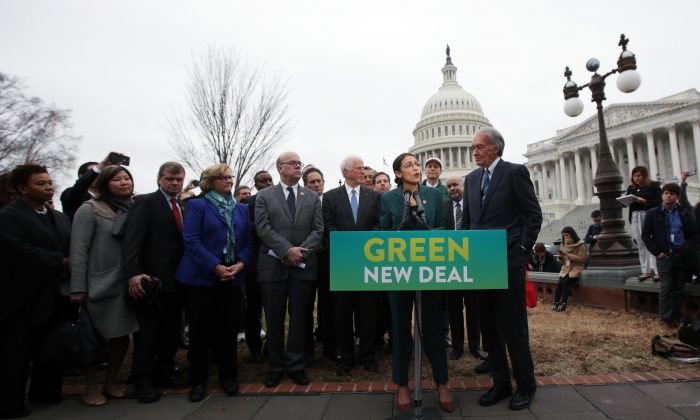 Except when they’re congratulating themselves or chortling over tasteless jokes about President Donald Trump that foul the airwaves on late night TV, most progressives seem a particularly humorless bunch. Who can blame them?

What with the country flourishing during the brief two years of the Trump administration while his potential presidential challengers compare unfavorably to bar-scene patrons from “Star Wars.”

Not to worry, though: The world will end in a dozen years or so anyway, according to the progressives’ current rock star and deepest thinker, Rep. Alexandria Ocasio-Cortez (D-N.Y.). This timeframe gives her soulmates a window of opportunity to conjure ways to implement their Green New Deal, which they assure us will ward off impending doom.

Before images of “Waterworld” wash away our brain cells, it’s important to place climate catastrophe hysteria into context. Many critical reviews of the Green New Deal have appeared in response to Ocasio-Cortez’s program, by Paul Kengor, Trevor Loudon, and Tyler O’Neil, to cite a few, along with predictable endorsements from Paul Krugman writing in The New York Times, and Sens. Kamala Harris (D-Calif.), Elizabeth Warren (D-Mass.), and, of course, Bernie Sanders (I-Vt.).

Undoubtedly, book-length treatments on both sides of the Green New Deal will appear, guaranteeing their authors dozens of speaking engagements and unlimited Twitter publicity. Our goal here is not to plunge into an exegesis of proposed legislation on this program—which will be a moving target in coming years—but rather to suggest several themes important to our understanding of the Green New Deal.

If the verbiage gushing from Green New Deal enthusiasts could somehow be harnessed, the spinning blades of every windmill on the planet would challenge scientific principles that assure us perpetual motion is impossible. Advocates of the Green New Deal gasp in panic-stricken sound bites about how little time Earth-dwellers have before catastrophe overwhelms us all.

In fact, any perusal of reactions to recent Intergovernmental Panel on Climate Change (IPCC) reports brings to mind historian Norman Cohn’s treatment of how desperation fueled various political and intellectual trends in “The Pursuit of the Millennium” during the Middle Ages. Thus, Sen. Ed Markey (D-Mass.) proclaimed, “This is going to be a mission to save all of creation by engaging in massive job creation.” Nice touch he had at the end, there; otherwise, hope bites the dust and the Green New Deal, too.

Warnings from other notable Green New Deal acolytes also heat up the atmosphere—which apparently is never a good thing—and even Speaker of the House Nancy Pelosi (D-Calif.) has spouted a few lines that seem uncharacteristic for her: “We need to protect God’s creation,” she wrote on Twitter.

Harris is fully on board: “We must aggressively tackle climate change which poses an existential threat to our nation.” Ocasio-Cortez naturally leads the charge, declaring the Green New Deal is a “life and death” issue. Sanders criticized the president for not mentioning climate change in his State of the Union address—what an outrage!

Sanders’s charge is true enough, but Trump didn’t request funds for windmills disguised as giants, either, sensibly assuming that Don Quixote is a Democrat, not a Republican. In fact, the Democratic Party is bursting with Quixotes, all saying the same thing about climate change, because the monstrous requirements of the Green New Deal can’t possibly be justified without continuous screeching about our planet’s inevitable destruction without it.

What should America do, then? Few have supplied a better answer than Sen. Cory “Spartacus” Booker (D-N.J.).

An online dictionary definition of “sham” includes such words as, fake, bogus, fraudulent, duplicitous, dishonest—the list goes on. Why should such descriptors be applied to a subject with catastrophic global implications?

Several observations are in order, here. World War II had a defined beginning and end, with dates some of us still celebrate with appreciation: V-E Day and V-J Day. The same point applies to the Marshall Plan, which had circumscribed dates, achieved its purpose, and Europe recovered, end of the story and end of the plan. The world returned to familiar patterns of great power politics, with different regimes threatening the global order. These cases aren’t analogous to what the Green New Deal portends, which is a transformation of every institution on Earth with no end in sight.

Further, the 1930s slogan “New Deal” originally applied to conditions that required no explanations, no pleading, and no coercion whatsoever to believe what horrible shape the country was in. There was no such thing as a “Great Depression Denier” that prompted elites to carpet-bomb the population with mathematical formulas, “predictive” computer models, or inscrutable algorithms. No pseudo-scientific pronouncements from unaccountable zealots were needed; there were no threats to imprison those who somehow couldn’t grasp what President Franklin Roosevelt meant when he said, “I see one-third of a nation ill-housed, ill-clad, ill-nourished.”

In short, to describe the most preposterous ideas in history with a glib reference to the original New Deal is a travesty, a disgrace, as close to a sacrilege as any secular depiction could be. Which brings us to the third, most terrifying characteristic of the Green New Deal.

Critics of the Green New Deal cited above have pointed out correctly that the whole scheme reeks of socialist totalitarianism, enslaving the population for the sake of combating fictitious adversaries. Marxism, communism, and Stalinism are brought into the discussion in order to more fully grasp the implications of what “total transformation” of society means. Believe it or not, it gets worse than that, based on the musings of a figure who so far (to my knowledge) has not been cited: Leon Trotsky, the Bolshevik rival to Stalin whose thugs had him murdered in Mexico in 1940.

What did Trotsky have to say? Declaring it “unthinkable” that a socialist revolution would stay within national boundaries, Trotsky declared that “socialist construction … must inevitably lead to explosions, that is, internally to civil wars and externally to revolutionary wars. … Thus, the socialist revolution becomes a permanent revolution in a newer and broader sense of the word; it attains completion, only in the final victory of the new society on our entire planet.”

This sobering observation veritably leaps from the page on any reading of the Green New Deal’s goals and policies. After all, it isn’t just a matter of initiating a policy, administering it, and declaring completion. Quite the contrary, Americans should expect “civil wars” on a permanent basis, and an enslaved population obeying the masters and commanders of the Green New Deal.

In fact, everything we know about totalitarian regimes confirms Trotsky’s prescriptions, in that political ideologies like Nazism, Bolshevism, Maoism, and others can’t survive in conditions of stability, without eventually disintegrating or changing in ways inimical to the interests of ruling elites. These historical phenomena must be understood as political movements, which by their definition and survival never achieve their goals, never come to a resting place, never approach a summum bonum, and never create a “better” world.

In short, mandatory apocalypse, a sham “New Deal,” and a Trotskyite permanent revolution await all those who subscribe or submit to America’s budding experimentation with totalitarianism, treacherously passed off as the Green New Deal. Hitler would have understood this; Stalin certainly did.

And so should we, as well.