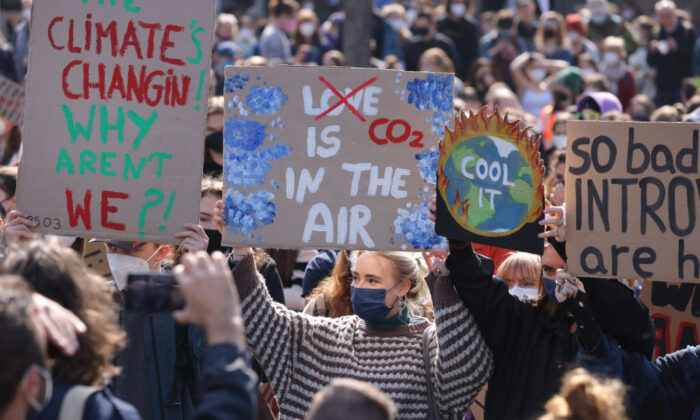 Supporters of the Fridays for Future climate action movement gather as part of a global climate strike in Berlin on March 25, 2022. (Sean Gallup/Getty Images)
Viewpoints

The concept of “the social cost of carbon” (“carbon” being used here as shorthand for “carbon dioxide”) has been around for at least 40 years, and has become more prominent in the past decade or so. In the briefest terms, the social cost of carbon metric is designed to try to quantify in economic terms what economists call an “externality”—in this case, the economic impact (past, present, and future) of human emissions of greenhouse gases into the atmosphere contributing to climate change.

The Organisation for Economic Co-operation and Development defines externalities as “situations when the effect of production or consumption of goods and services imposes costs or benefits on others which are not reflected in the prices charged for the goods and services being provided.”

Thus, when you fill up your car with gas, you receive a benefit that you willingly pay for, and the producers, refiners, distributors, and vendors of the gas benefit from your payment, but nowhere in that transaction are the alleged environmental or climatological effects accounted for. Those who believe that human consumption of fossil fuels is altering the climate and will lead to costly disasters in the future propose higher taxes on fossil fuels to lessen consumption and raise funds for preventative and remedial measures.

The Biden administration (not surprisingly, given its overt anti-fossil fuels policies) is on board the “social cost of carbon” train. In fact, on his first day in office, President Joe Biden reauthorized the Interagency Working Group on the Social Cost of Greenhouse Gases.

The first point that should be made about any economic cost–benefit analysis is that the calculations rest on the assumptions of those making the calculations. These assumptions are subjective. To the degree that inputs for a calculation are subjective, the result can’t be said to be scientifically objective. We’re dealing with guestimates with margins of error amounting to trillions of dollars over the coming decades.

The next point is that those who want to use the “social cost of carbon” (or of “greenhouse gases”) to push for a rapid transition away from fossil fuels show obvious biases. You can see it in their word choices. One major bias is when they single out carbon, even though water vapor is by far the most impactful greenhouse gas. Another bias is to always lead with “social cost.” Conspicuous by its absence is the word “benefit.” You can’t even pretend to be producing a fair-minded cost–benefit analysis without giving equal weight to the benefit side of the equation.

Are there benefits to a warming climate, and therefore to human emissions of carbon dioxide (CO2), that are contributing (modestly, so far) to the warming trend? Yes, indeed. The human-assisted CO2 enrichment of Earth’s atmosphere over the past four or five decades has led to a greening of the planet—an increase of land featuring vegetation about twice the size of the continental United States. Climate change expert Bjorn Lomborg says the land is equivalent to “three Great Britains” per year—smaller, but still significant.

Since, according to the English medical journal The Lancet, “cold weather kills 20 times as many people as hot weather,” overall weather-related human fatalities decline when the climate warms. Warmer weather also leads to longer growing seasons, providing a boost to agricultural productivity.

Those benefits are considerable, and undoubtedly one can think of other benefits. But what kind of dollar value can we put on those benefits? You can readily see the validity of the point I made above—that assigning dollar values to factors in a cost-benefit analysis is subjective and arbitrary.

What about the costs of a warming climate? This is even more problematical than the benefit side of the equation. We can point to present, actual benefits of warming that surround us today, whereas the alleged costs involved in catastrophic scenarios are in the future. They may or may not come to pass and are thus highly conjectural. I don’t know about you, but given the fact that the alarmists can’t find a computer model that can account for the climate trends of the past several decades, how can we believe those computer models can correctly predict how the climate will change over the next several decades?

There’s also the problem of possible misattribution. For example, those calculating the costs and benefits of a warming climate might assign a high cost to coastal areas that may be lost to rising sea levels. However, the sea level is rising in many of those areas (e.g., Chesapeake Bay, Louisiana bayous) primarily because the land is subsiding. Yes, actual sea levels are gradually rising, although they’re doing so at basically the same rate they have been for centuries during Earth’s current inter-glacial period—a trend that hasn’t accelerated because of atmospheric warming.

I wonder if the alarmists harping about “the social cost of carbon” are counting the rapidly rising costs today of Americans feeling the economic pain of high prices—the prices of fuel itself, as well as food and other goods (i.e., most other goods) for which energy is a significant cost factor. The Biden administration talks as though the current pain of high prices is well worth it in the long term because it will help to wean us off fossil fuels by some politically chosen “magic date,” such as 2030 or 2040. Such a time frame—the time frame fervently supported by climate catastrophists—is ridiculously unrealistic.

In a recent interview, the scientist Vaclav Smil cited Germany’s attempt to replace fossil fuels with intermittent (i.e., “renewable”) sources of energy: “Germany, after nearly half a trillion dollars, in 20 years they went from getting 84 percent of their primary energy from fossil fuels to 76 percent. Can you tell me how you’d go from 76 percent fossil fuels to zero by 2030, 2035?”

Clearly, those who want to slam the brakes and radically curtail or stop the human race’s consumption of fossil fuels in the short term will, if successful, impose enormous pain (costs) on a lot of people. Are they figuring those costs into their cost-benefit analyses?

The reduced standards of living resulting from anti-fossil fuel policies can involve enormous unforeseen costs. Some young American capable of discovering some fantastic new technology might not do so because of having to forsake college because of the impoverishing effect of today’s price-inflating anti-fossil fuel policies. Some kid in a developing country who could come up with a new life-saving idea (or who could be the parent or grandparent of such a genius) might never achieve that potential for similar reasons.

This whole “social cost of carbon” movement reminds me of communism. Wait, let me qualify that statement: There are many decent, caring people earnestly working to try to find a viable, affordable way to eventually transition to different forms of energy, and I’m sure they’re doing their conscientious best to work out a cost-benefit analysis of atmospheric CO2 that’s somewhere in the ballpark in terms of validity and helpfulness. But the aspect of the “social cost of carbon” issue that reminds me of communism is the fervid assertion of some of its more fanatical advocates that we, the people, need to suffer deprivation today so that the glorious future envisioned by political elites can come to fruition. Thanks, but I’ll pass.

Let those who are alive today flourish and have the opportunity to achieve their potential. The notion that government should impoverish actual human beings as a means of promoting “the welfare of humanity” is a pagan superstition on par with sacrificing individuals to the sun god. The social cost of anti-carbon dioxide policies is unconscionably high, and we shouldn’t have to pay it.