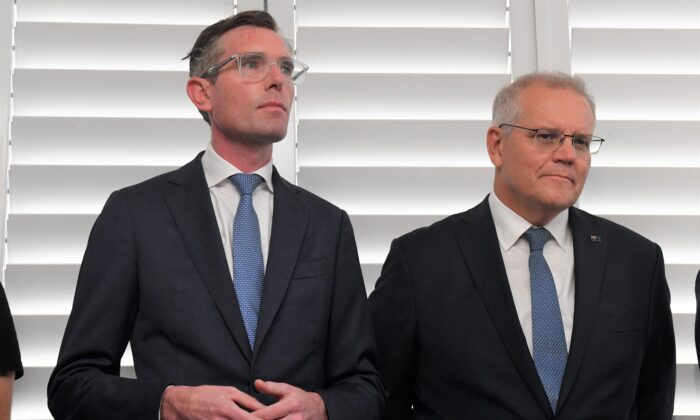 NSW Premier Dominic Perrottet and former Prime Minister Scott Morrison at a press conference on Day 30 of the 2022 federal election campaign, at the Epping Club in Sydney, Australia, on May 10, 2022. (AAP Image/Mick Tsikas)
Viewpoints

The Problem With Separating Church From State

Some wit remarked a few days ago that former Australian Prime Minister Scott Morrison, who has been revealed to have held several ministries simultaneously, should change his pronouns to the plural “they” and “them” after holding so many positions.  It’s not a bad joke, as even his remaining fans would probably agree.

But little else in the saga is witty or kind. It also brings up a range of questions. Was anybody else present at this private swearing-in ceremony? Did the former prime minister pay himself multiple salaries? Did he act in any way treasonably or traitorously? Was he stepping in to stop a threat to national security? Was any real harm done?

The answer to the last question, according to the left and its supporters, is an emphatical yes. However, it is generally agreed, though passed by in relative silence, that any formal enquiry into the situation will clear the former prime minister of wrongdoing.

Yet the current prime minister still speaks darkly of the situation.

We all know that Morrison had already put pressure on the Constitution—not by taking on extra portfolios but by taking the extraordinary measure of creating a National Cabinet of state premiers to run the country during the COVID-19 pandemic. It should be noted that nobody on the left complained about that.

Likewise, it should be understood that Morrison is not the first prime minister to challenge the idea of how the ministry portfolio system works.

Some readers will recall how former Labor Prime Minister Gough Whitlam, following his election in 1972, shared out the ministries with his deputy Lance Barnard. The two of them ran the country by fiat for several weeks before a full cabinet was selected.

Far from being condemned by the left, such innovative boldness was generally admired. Even if we hadn’t voted for him, we all got a sort of buzz from reading the daily edicts. There’s something exciting about ruling by decree, and everything was done to appeal to young and progressive people, tired of the Vietnam War and looking forward to change for its own sake.

Now the New South Wales premier, Dominic Perrottet, is in the spotlight. Admittedly not without good reason: his response to questions about the absurd cost of the Aboriginal flag on the Sydney Harbour Bridge, let alone his incoherence at its reasons for being there at all in place of the state’s own flag, disappointed many who would have been his supporters.

Likewise, he appears to have been pretty consistently AWOL (absent without leave) on many of those issues that deeply worry conservatives: the epidemic of sexual “fluidity” among school children, the ever-accelerating growth of the indigenous rights industry, the teaching of flawed history, and content-free social sciences in schools. Where is this young Christian family man when his state needs him?

Here’s the crux of the issue. Perrottet and Morrison have this in common; they are both practising and believing Christians. None of that is in doubt: they profess their personal faith openly and fearlessly. They belong to different sects within Christianity—Morrison is a pentecostal protestant, Perrottet a Catholic—but what they have in common is far more important than the points of doctrine on which they differ.

A couple of generations ago, that may not have been entirely true, but the gap in the protestant/catholic divide has almost closed now, and Christians of all colours have perforce learned to huddle together in a world that appears to be increasingly indifferent or even hostile to their values.

John F. Kennedy would never have become the U.S. president if he failed to persuade voters that he would not allow his religion to interfere with public policy. In a way, a sort of rot set in then, though not everyone, of course, would see it that way: Christian politicians, especially in Australia, learned to keep their opinions to themselves.

Some would claim that their neutrality was faithful to the Gospel: after all, did not Christ say, “be ye therefore wise as serpents, and harmless as doves?” But impartiality and moral neutrality can easily morph into ambition.

Few seriously doubt that Australian “heritage” media are left-leaning. Notoriously, the Australian Broadcasting Corporation has no recognisable right-wing reporters or commentators; many are blatantly on the left. The Australian manages to keep a reasonable balance, but other major papers such as The Sydney Morning Herald and The Age can always be trusted to present a thoroughly “progressive” spin on all reporting.

Politicians of the right have to contend with that, and the temptation to keep quiet about their less popular beliefs must be almost overwhelming.

Believers claim that God alone knows the secrets of our hearts, and it would be presumptuous and foolish of any of us to cast the first stone at individuals.

Is Silencing Our Own Beliefs Worth It?

There are very strong arguments that might persuade a politician of Christian persuasion in Australia that his silence on certain controversial matters could be a reasonable price to pay for an electoral victory against an opponent who was, let’s say, antithetical to Christian morality. But political expediency is dangerous territory.

“It is expedient that one man should die for the people,” said Caiaphas, advice that has always been condemned by ethical thinkers, Christian and agnostic alike.

It seems likely that Perrottet could suffer the same fate as Morrison: stalked, bullied, and demonised by unsympathetic left-leaning media.

Would it be wiser for Christians and others who aspire to a political office yet hold firm and conservative views on moral issues to proclaim their views openly and without compromise? If more did, would there be even fewer Christians among our leaders? Or would we be surprised to find even more?

Nobody can answer that. I wish we had among our leaders such heroes as Bishop von Galen of Münster, who spoke out so boldly throughout the war against the evil policies of the Nazis, yet even Hitler dared not touch him.