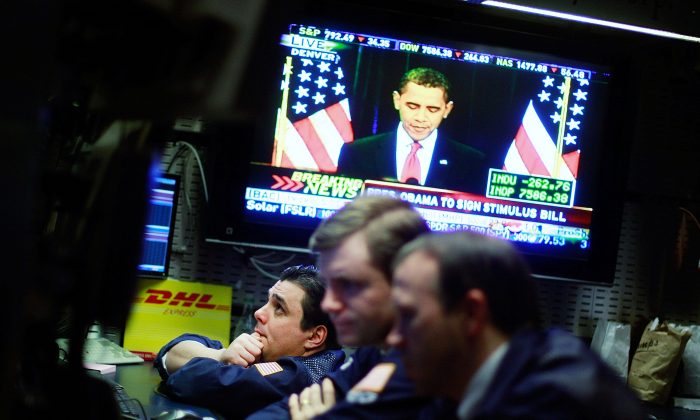 Traders work on the floor of the New York Stock Exchange during afternoon trading as President Barack Obama is seen on television at the economic stimulus bill signing ceremony on Feb. 17, 2009. Despite evidence that stimulus plans do not stimulate the economy, "experts" continue to recommend them. (Mario Tama/Getty Images)
Viewpoints

The Problem With Experts

You’ve probably heard the saying that the Ark was built by amateurs, while the Titanic was built by experts. This cute little quip doesn’t mean to imply that experts and expertise are worthless, but it does capture an important truth: There are limits to the expertise of experts.

In the 1960s, a young man at Yale wrote a term paper in an economics course, in which he introduced an idea for a new business. His professor thought his pupil’s idea was crackpot and gave him a “C” on his paper. The pupil, Fred Smith, was undeterred. A few years later, he implemented his business plan and created FedEx.

Was Smith’s professor an expert? Most certainly. He surely was both intelligent and accomplished. But of what was he an expert? All experts are expert about only one thing: the past. Expertise is confined to what is already known (and even then, what is “known” isn’t always true). Nobody is an expert about the future, for the obvious reason that the future is as yet unknown.

Despite the stubborn fact that humans can’t and don’t know the future, too many gullible people naively believe that “experts” can reliably foretell it.

One field in which this superstition persists is mine: economics.

If you want to know what the result of some economic phenomenon is likely to be, economists could tell you the expected effect if we could isolate the causal phenomenon from all other causes and influences.

But we can’t separate one cause that impacts human behavior from all other causes as we could if we were conducting a controlled laboratory experiment. Human society is far too complex for simplistic prognostications, and the future eludes the best efforts of economic experts to reveal its secrets.

Despite the inability of economists to regularly make correct predictions, whether about the overall economy or the direction of the stock market, people persist in believing or hoping that, because economists know more about economics than most people, and therefore are “experts” on the subject, they can predict the future or advise governments on what policy tools will boost prosperity going forward.

This is the fallacy of central economic planning, the impossibility of which was fully explained in Ludwig von Mises’ 1922 masterwork, “Socialism.” It’s also the conceit of Keynesian macroeconomics. Keynesian ideas have made a comeback in the early years of this century, despite its theoretical tenets having been discredited by the stagflation of the 1970s.

Former President Barack Obama marshaled Keynesian ideas to sell his stimulus plan to the public and Congress. Like previous stimulus plans, and in accordance with inexorable economic laws, that “stimulus plan” failed to effectively stimulate.

Despite that recent history, The Wall Street Journal reported last month that the Organization for Economic Cooperation and Development is advising national governments to “ready stimulus for [the] next downturn.” Apparently, they remain impervious to the clear evidence assembled by Nobel Prize-winning economist Edmund Phelps showing in black and white that stimulus plans do not stimulate.

The basic problem with “experts” today is that politicians are charged with setting public policy, and they need experts who will justify their policies.

It appears not to matter if there is abundant evidence that the experts’ theories do a poor job of explaining reality. However, lacking a better explanation of the future, we collectively settle for the best that reputed experts can provide. Consequently, faulty theories become accepted dogma and policymakers rely on learned quackery.

The other area of public policy that suffers most egregiously from pretentious prognostications is climate science.

True, scientists who have studied climatological phenomena know more about the underlying chemistry and physics of those phenomena than laypersons. But for the same reason that economists can’t predict the future—a far-from-complete understanding of what all the variables are, how strong the relative effects of each one will be, and the inability to isolate factors—climate scientists can’t predict future climatological conditions (as the Intergovernmental Panel on Climate Change itself has stated unequivocally).

It may hurt the pride of climate experts to hear that you or I may be just as likely as them to guess whether the world will be warmer or cooler in future centuries, but it’s true. Just as stimulus plans have become a rigid economic dogma in the parts of the economic profession that are closely allied to government, so the false notion that carbon dioxide is the thermostat regulating global temperatures has become dogma among politicians and the climate scientists they fund.

Any intelligent non-scientist can easily understand that if the historical geological record shows that there have been both warm and cold periods when the atmospheric concentration of CO2 has been both high and low, and there have also been periods when rising concentrations of CO2 followed rather than preceded warmer temperatures, that CO2 can’t be the primary cause or controller of climate change.

Politicians acting on the basis of expert speculation about the future have, and will continue to inflict much economic damage on society. It will be an uphill struggle to break free from this powerful and dangerous partnership—especially in light of the unquestioning support that many major news outlets confer upon government’s chosen experts.

Think about this the next time you read something like, “The world’s foremost climate scientists agree that climate change has reached a critical juncture.” Who decides who the “foremost” scientists are? By default, the major media tend to assume that they are the scientists chosen by political leaders to receive government grants or to serve on taxpayer-supported national and multilateral panels that call for governments to radically restructure society.

What qualifies politicians to judge who the best scientists are? It is disturbing that journalists blindly assume that government-sponsored scientists are the best and that their speculative predictions must, therefore, be correct.

We need to have a more balanced and realistic appraisal of experts. While experts in various fields merit our respect for what they know, we need to avoid the pitfall of believing that they know the unknowable, i.e., the future. Beware the cult of experts.