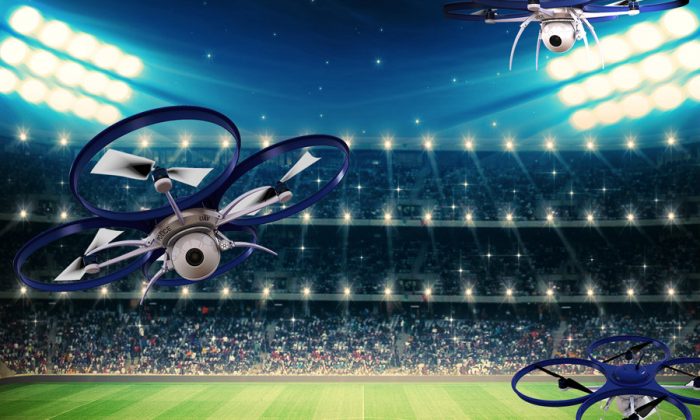 So far, Brazil has reportedly spent almost $900 million not only on 150,000 or so personnel, but also on US military bomb-disposal robots, a bunch of Israeli drones, a British mobile scanner that can spot a plastic 3D printed pistol, facial recognition goggles, and the list goes on. (Courtesy of New America Foundation)
Americas

The Price of Soccer Safety

While you’re in Brazil watching soccer star Cristiano Ronaldo, a drone may be watching you.

International mega-events like the FIFA World Cup are part of an ever-escalating, increasingly expensive security tech arms race that may have lasting repercussions for the privacy of citizens in host countries.

So far, Brazil has reportedly spent almost $900 million not only on 150,000 or so personnel, but also on US military bomb-disposal robots, a bunch of Israeli drones, a British mobile scanner that can spot a plastic 3D printed pistol, and ninety Chinese-built  X-Ray Inspection systems, not to mention, facial recognition goggles, high-tech surveillance helicopters, and digital command centers, and much more besides.

High-tech security gadgetry inside and outside of the stadiums is by no means unique to Brazil. Each new city must replicate and surpass the security of previous hosts. The recent Sochi Winter Olympics featured the VibraImage, which detected agitated visitors by measuring facial and muscle vibrations. Police during the 2012 London Olympics could keep an eye on every corner of the city with their expanded CCTV surveillance camera system. And South Africa’s 2010 World Cup had aquantum cryptography system to thwart hackers.

Minority Report-esque armed guards with facial recognition goggles are perhaps not the image FIFA would endorse for the World Cup. But as Colin Bennett and Kevin Haggerty note in their book, Security Games: Surveillance and Control at Mega-Events, security, as for the World Cup, is now part of the “Olympic ritual.” So how did we get here? History, powerful stakeholders, and the chance for host countries to secure a significant security legacy.

First, the history: At the 1972 Munich Olympics, a Palestinian terrorist group killed 11 Israeli athletes and a German police officer. Afterwards, other host cities began to worry that their mega-sporting events could also become targets. That 1972 attack was a turning point, according to Malcolm Tarbitt, director of security and risk advisory at the International Centre for Sport Security. But it was after the World Trade Center attacks of September 11 that the threat of terrorism became a dominant factor in the security planning of major sporting events.

The stakeholders—bodies like the International Olympic Committee and FIFA—increased pressure on countries to guarantee the event’s safety. The governments of participating nations and their planning committees would also make specific demands for heightened security, depending on what they perceived as the threat to their team and spectators. In order to meet this pressure for their 2004 Games, the first to be held post-9/11, Greece accepted the tutelage of a security consortium of the USA, UK, Germany, Israel, Australia, France, and Spain, along with input from NATO, the FBI, the CIA, MI6, and Mossad. All this security comes with a hefty, and growing, price tag. Brazil’s security budget is five times that of the previous South Africa World Cup. As the technology evolves, so does the magnitude of the threat and the cost of countering it. And that’s without any significant attack having yet taken place. “If anything truly catastrophic ever happens, these events would be virtually impossible to pay for,” Tarbitt said.

But for a host country, the astronomical cost can be worth it. These events are a chance for them to secure a good global image, and more problematically, greater security capabilities on the home front. As South Africa’s police minister said in the lead up to that country’s 2010 World Cup, “these investments are not only meant for the event but will continue to assist the police in their crime-fighting initiatives long after the Soccer World Cup is over.”

Brazil is looking to achieve something similar in 2014. Beyond the drones and robots, security experts agreed: the most significant security development will be the central command centers constructed in each of the twelve World Cup cities, with major ones in Rio de Janeiro and São Paulo. Rafael Saliés, in charge of Brazil projects for strategic advisory firm Southern Pulse, told me that each center is connected to a network of cameras—up to 4,000, depending on the city—which will collate images and data and relay it to the police, military, and intelligence forces.

While this may contribute to a significant security legacy for Brazil, it could also be a fraught one.

“Privacy is encroached on ever more at these events,” Tarbitt said. “But after the event, no one goes back and asks if the surveillance infrastructure has been downgraded.” The up to 1,600 CCTV cameras installed for the Olympics are still used in central Athens—just one of many examples. With such cover, mega events can be a useful means of introducing surveillance technologies into a society that might otherwise balk at them because of financial or privacy concerns, especially in host countries that may not have a history of attacks. Brazil, for example, while it has a very real crime problem, has had few experiences with terrorism.

So whom is this security technology meant to protect? And whom are they being protected from? In Brazil, and in many other host countries, it seems that the security apparatus is predominantly focused not on subduing an outside enemy, but its own people.

Widespread protests against the excess budgets of the World Cup planning in Brazil have made FIFA and Brazil’s government nervous. Security experts agree that civil unrest is the event’s greatest potential threat.

“This is usually about maintaining an elite, global, and corporatized event from the local people who have next to no access to it,” suggested Phillip Boyle, assistant professor at York University, who writes about risk at mega-events. Arguably more than it is about countering a terrorist attack.

Of course, the threat of terrorism is serious, and these events must remain safe and secure. But at what cost?  This security arms race, built around mega-events, has no foreseeable end. Such sky-rocketing budgets are increasingly hard to justify to populations who, while their taxes pay for the technology, must also submit to the greater surveillance and control it enables. Perhaps now is the time to consider building a special, highly-militarized panopticon city for the world’s sporting celebrations. FIFA or the IOC could foot the bill.