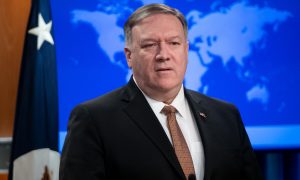 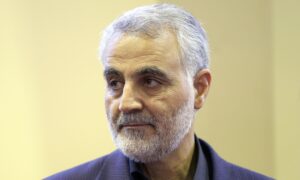 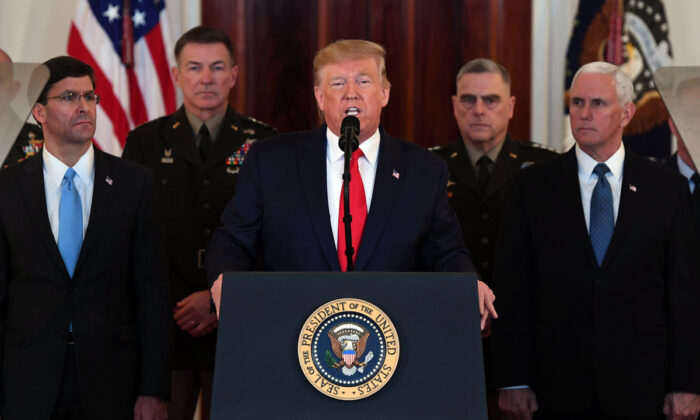 President Donald Trump speaks about the situation with Iran in the Grand Foyer of the White House in Washington on Jan. 8, 2020. (Saul Loeb/AFP via Getty Images)
Viewpoints

Opinion: The President’s Address to the Nation Was Perfect

President Donald Trump’s address to the nation in response to the Iranian retaliatory strike contained the perfect balance of toughness, seriousness, compassion, and hope.

Notwithstanding, Democrats in Congress immediately criticized the president’s decisions and subsequent remarks. They did so not because the president did anything improper, but because, once again, and to their dismay, his decisions were right and best for the country.

The responses to Trump’s speech were consistent among many on the left.

“Iran didn’t want Trump to kill Soleimani. But they were hungry for all that has happened as a result. They were starving to go on the offensive. Desperate to change the narrative, to swing public opinion and solidify their power in Iraq. To have a new excuse to attack anyone with an American flag on their shoulder, and to shrug off the restraints of the nuclear deal.

“Like a pawn in a game of chess he didn’t even seem to know he was playing, Trump was baited into handing them all of that. Like a child who is blind to consequences, ignorant of his own ignorance, he’s given Iran everything they could have asked for in the end, making it far more likely that tomorrow, or next week, or next month, more Americans will be sent into another one of the forever wars he’s bragged that he, and he alone, would be able to end.”

Rep. Ilhan Omar (D-Minn.) tweeted: “This makes no sense. Sanctions are economic warfare. They have already caused medical shortages and countless deaths in Iran. You cannot claim to want deescalation and then announce new sanctions with no clear goal. This is not a measured response!”

Democratic presidential candidate Tom Steyer tweeted: “I’m grateful that no Americans or Iraqis were harmed in last night’s missile strikes by Iran. Let’s make one thing clear: Trump created this crisis and his remarks today demonstrate, once again, that his go at it alone strategy makes our country less safe.”

Rep. Barbara Lee (D-Calif.) tweeted: “Let me be clear: Trump is responsible for this crisis. He has shunned diplomacy since Day 1, filling his cabinet with warmongers and war hawks like Pompeo. It’s past time to return to diplomacy with our allies and repeal the 2001 and 2002 AUMFs to #StopEndlessWar. #NoWarWithIran”

Not only was the president’s decision to strike Iranian Maj. Gen. Qassem Soleimani lawful, his address to the nation was perfect.

In it, the president combined strength (“As long as I am president of the United States, Iran will never be allowed to have a nuclear weapon.”), compassion for the Iranian people, and hope (“Finally, to the people and leaders of Iran: We want you to have a future and a great future—one that you deserve, one of prosperity at home, and harmony with the nations of the world. The United States is ready to embrace peace with all who seek it.”).

He also realized the importance of imposing additional sanctions on Iran and of keeping the military option on the table, as opposed to merely “trusting” that Iran would do the right thing. Why would Democrats, who have been pushing the president to avoid war, possibly complain about the contents of his speech or its message?

While many on the left have blamed (and continue to blame) the president for his recent decisions due to their fear of Iran’s potential retaliatory strike or a war, the eventual strike was contained and resulted in no American injuries or deaths.

Iran could have chosen to directly target U.S. bases (as opposed to those that are controlled by Iraqis and which house American soldiers). Iran could have also hit the selected bases more precisely, as it did in Saudi Arabia. The reason why Iran didn’t do so is due to Trump’s unwillingness and refusal to follow a policy of appeasement (like previous administrations did), and his showing of strength and resolve.

Not only did Trump come out on top during this latest round with Iran, Democrats in Congress came across as apologetic whiners with no proposals on how to best deal with Iran’s nuclear aspirations. Rather, Omar criticized the notion of imposing economic sanctions, comparing them to economic warfare.

Does she not understand that many in Iran’s top leadership have threatened to annihilate the State of Israel, consider the United States the “Great Satan,” and have killed many of their own Iranian citizens?

Does she propose that the president sit down for coffee with the leadership of Iran and simply forget about the sanctions, hoping that the leadership will have a change of heart with respect to Israel, the United States, and the rest of the free world? This is simply naïve.

Duckworth, Steyer, and Lee also failed to offer any solutions. Rather, they simply blamed President Trump for creating this crisis or opined that he was “played.” Once again, they failed to provide solutions as to how to deal with Iran’s dangerous nuclear ambitions.

Lee, for example, suggested a return to diplomacy and the repeal of the 2001 Authorization for Use of Military Force, which was implemented in response to the 2001 terror attacks. What specific type of diplomacy is she suggesting? What possible reason would Iran have to return to the negotiating table if the United States continued its policy of appeasement?

How many additional Americans would need to lose their lives before Democrats in Congress realize that diplomacy with a rogue regime will not succeed without the imposition of strong economic sanctions and the possible use of military force, if necessary?

While Democrats in Congress continue to chide the president, President Trump should rest assured that many Americans support and appreciate his bravery, strength, resolve, and thoughtful leadership.

His address to the nation was perfect. He appeared strong and determined, yet offered the leadership of Iran a golden opportunity to pursue peace, which would benefit the Iranian people, the entire region, and the rest of the world.