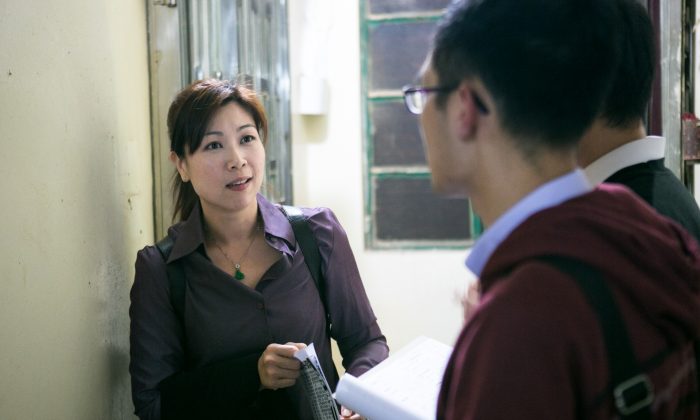 A local resident of Mong Kok (L) speaks with volunteer pro-democracy activists Chris Chan and Stanley Wu in Hong Kong in November. Reaching out to the public has become an important new phase of the movement. (Benjamin Chasteen/Epoch Times)
China

The Preachers of Democracy’s Gospel in Hong Kong

HONG KONG—Chris Chan and Stanley Wu knocked gingerly on the door of a tiny apartment on the sixth floor of a grimy and sometimes fetid walkup, one of many warrens of residences in the densely populated neighborhood of Mong Kok.

A short woman in her 80s opened the door a crack and, after hearing their pitch, announced that she had no interest in hearing any more. “Very, very noisy!” she said of the protests in the nearby streets, waving the two men away, before slamming her heavy door shut.

Responses like that were common when Chan and Wu went door knocking last month, before the occupied zones had been taken apart by police and bailiffs, hoping to convince the residents of Mong Kok that their occupation of the streets, in the name of greater democracy, has been justified.

As Hong Kong’s democracy protests wind down, after two months of occupation of key roads, the battle for public opinion to follow is taking on increasing significance. Several opinion polls last month showed that most Hongkongers wanted the protesters off the streets, as frustration with the prolonged occupation built.

This month, they got their wish, with the main protest site in Admiralty demolished by police and hired construction workers on Thursday.

And so the student protesters will push forward with a Blossom Everywhere campaign. They take their message of the need for greater democracy to the street corners, strip malls, and the sixth floors of apartment buildings around the city, instead of occupied roads.

At stake is whether they can convince the public to sympathize with and support them—and so with the future of democracy in Hong Kong.

From 8:00 p.m. to 10:00 p.m. nearly every day, Kelvin Kwan, a student of social work, organized a group of about a dozen volunteers to fan out across Mong Kok’s apartment buildings. They paired up to visit pre-scouted addresses, knocking on each door—to pretend they’re carrying out a “survey.”

The survey is a ruse, of course: by asking “Have you found the protests disruptive?” and a battery of other questions, they are at least able to get the residents in a conversation.

“We know that the occupation is noisy and disruptive, of course. But If we just came to tell them about universal suffrage, no one would want to talk,” said Stanley Wu (a pseudonym), who works at a research organization that is funded by the government. His colleagues don’t know about his nightly avocation, and he would not allow any photographs of his face lest they find out.

At another door, a middle-aged woman also told them to buzz off, after saying “If you’ve got food to eat, what are you fussing about?” She lived in a taofang—a tiny space made by subdividing a regular apartment into four or five. She said she had to go to feed her 4-year-old son—who was regularly woken by the yelling in the streets—and slammed the metal grate shut.

Such interactions continued into the night—though there were also those staunchly supportive, and some genuinely curious. It didn’t seem that the two volunteers succeeded in converting anyone to their cause, however. But at least they were not screamed at and driven out of the building by a former Red Guard, as happened on a previous night. Some of the apartments were flagged to visit again.

“Tonight was so-so. It’s a challenging task,” said Wu. “But this is the most direct way to reach the people and spread our message. Now, the information is imbalanced. The media here is very pro-mainland.”

Without a constant presence in the streets, and after the clearances of Mong Kok and Admiralty, the door knocking and reaching out to the public has taken on added significance.

“The students will keep on doing this with the people’s support,” said Wu. “This is a very long battle.”

Kelvin Kwan said that they had taken a break with the outreach after the clearance of Mong Kok. “We are connecting with other groups, doing this together. We need to spread the message to the broader public, telling them how democracy is linked with ordinary life.”

Many in the city see themselves as apolitical, and don’t draw any direct connection between the election of the chief executive and their own lives. “Well actually, whether they can elect a candidate freely matters. We explain it to them from many angles. It’s directly related to people’s ordinary lives.”

Popo Lai, a student, ventures much further afield than the Hong Kong heartland area of Mong Kok. For several hours on Sundays she sets up a stand at train stations in the New Territories area closer to the Chinese border—places sometimes heavy with recent immigrants from the Chinese mainland.

At a recent event, one of her friends had her table flipped over and was cursed at by an angry crowd. “They get paid to come and disrupt us,” Lai, 25, said in an interview. “They’re very aggressive, with their megaphones. Usually when they come we simply leave.”

Lai is affiliated with the Neighborhood and Worker’s Service Center, a small pro-democracy political group that promotes political awareness among working-class people.

The propensity for violence among those who disagree with the occupation has led some not to even venture out. Xiao Yun, a 23-year-old volunteer with People Power, another small democracy activist group with a hard-left bent, said that his organization doesn’t set up tables in the streets because of the concerns that they’ll be surrounded by pro-Beijing thugs. “Too dangerous!” he exclaimed.

Those who simply struggle to make a living have sometimes proven difficult to reach for the young, university-educated protesters that camped out in tents on the roads outside government buildings until recently. A common refrain from taxi drivers, bus drivers, and hospitality workers is: If you can’t make a living, what are you talking about democracy for?

This offers an opening for some, however. One of the key lines of argument for the protesters has been an attempt to link “mansaang” with “manzyu”—livelihood with democracy.

This has been a major focus of the energies of the gregarious Tina Luk, a 42-year-old activist with the Labor Party, one of the larger parties in the pro-democratic camps. She is a living example of what the younger student leaders have said is essential for the real penetration of democratic spirit into the Hong Kong psyche: linking democratic governance with the most basic needs of daily life.

“I’ll talk to people wherever I am—in my neighborhood, while they’re walking their dogs, or out with their children,” Luk said. She used to man a Labor Party tent at the formerly occupied zone of Admiralty, surrounding government buildings.

“I ask them what their salary is, whether they have enough to get by, what they think about government policy, what they’re not happy about, and so on.”

When she detects discontent—”did your rent go up recently?” is a favorite for eliciting that—she deftly steers the discussion to politics. Voting is a way to elect candidates that can work to improve social and economic conditions for everyone, she explains.

Hong Kong, a group of islands and an archipelago of nearly 8 million people, exhibits some of the greatest wealth disparities of any city in the world. Residents can spend over half their income on rent, and end up living in tiny apartments—100–200 square feet—or staying with their parents indefinitely.

Much of the persuasion is not about policy details, however. It’s simply about attempting to foster a widespread sense of support and sympathy with the democratic cause.

“I give fruit to my doorman, I tell him to read Apple Daily, I explain why the police shouldn’t beat people, and tell him why I, as a good Christian and neighbor, go to the street and break the law,” she said. Apple Daily is the main pro-democracy newspaper in the city.

The hope isn’t that he’ll also come out and set up a tent. It’s merely that he’ll support those who do.

“If I tell three people today, then in 10 days they might tell their family and friends. If we each convince one person, then we double our numbers. If everyone sees the relationship between livelihood and democracy, society will change.”