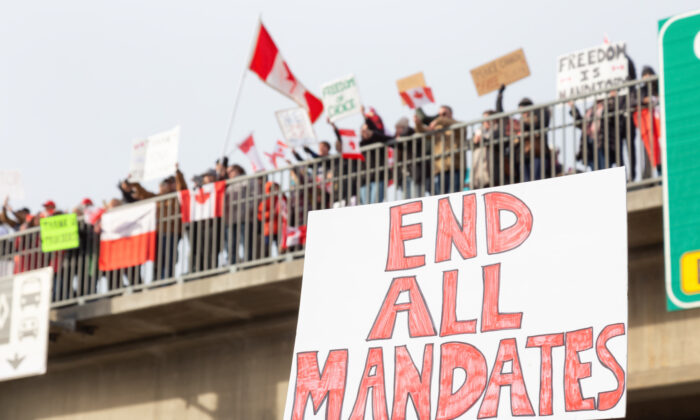 People on a highway overpass support the Freedom Rally and the protest of the truck drivers against vaccine mandates, in Surrey, Vancouver, British Columbia, Canada, on Jan. 29, 2022. (EdgarBullon/Shutterstock)
Viewpoints

The Power of Protest

All in less than one week, Israel has repealed restrictions and is backing off vaccine mandates, even as cases and deaths are hitting new highs, and implausibly so in the most vaccinated and boosted country in the world. The UK has backed off too. Same in Denmark, Ireland, Finland, and Norway. Switzerland has joined in, and Sweden has rolled back its plans for a vaccine passport. Saskatchewan is ending all restrictions.

We are seeing local governments and universities in the United States gradually stepping back. No new cities have joined the brigade for vaccine passports and Denver is stopping theirs. Poor suffering New York City, assaulted by a new segregation mandate, is reeling from the mandates, and surely a rethinking is coming. How many states now wish they had taken the path of Florida, which is experiencing a remarkable economic boom?

Monmouth University tracks attitudes in the United States toward government and media as it pertains to the pandemic response. At this point, every arrow over time slants down to the right. The number of people opposing vaccine passports outnumbers those supporting them by 10 points. A polled 70 percent say it is time we accept COVID as normal.

It is surely not a coincidence that all of this accelerated the same week as the trucker convoy formed in Vancouver and made the trek across the entire U.S.–Canada border, in the snow, ending in Ottawa and gathering many tens of thousands of citizens to protest. The prime minister fled the city and went to his bunker, making what looked like hostage videos that denounced the truckers with all the usual epithets.

What’s even more striking is that the media in the United States and Europe didn’t cover the convoy, probably the largest in history and certainly the most important protest in modern times in Canada. The topic never ended up on the front page of either The New York Times or The Wall Street Journal. And yet, the effect was hugely powerful. Public opinion in Canada swung 15 percent to create a solid majority against all restrictions and mandates.

And other governments around the world are paying attention. There is fear in the air. They are backing down, more already in Europe than the United States. But even in U.S. blue states, you can see evidence that the basis for restrictions and mandates is falling apart.

Let’s also mention New Zealand, the island nation that pretended it would somehow magically make the virus go away. Now, with wave after wave of cases, even the crazy Jacinda Ardern is rolling back quarantine mandates and gradually reopening the country.

The great slogan is “living with COVID.” It’s an implicit repudiation of everything that has happened for two years, and what we should have done along along. But the fanatics took over. The hysterical scream back in 2020 was that the power of the state, backed by media and corporate interests, would somehow make the virus go away. It was always ridiculously unachievable. The attempt unleashed massive abuse against the population, disrupted economies everywhere, and unleashed a tremendous amount of financial corruption that is still going on today.

We are nowhere near done with this. Massive restrictions are still in place. Travel is still a disaster. The mask mandate on transportation is as awful as ever. The segregation in D.C., NYC, and Boston is morally repulsive. Plus, so many lives have been shattered. So many businesses have closed. Public health is in shambles. The demographic disruption has been profound.

There are scandals lurking everywhere. What exactly were Fauci, Farrar, and Collins doing the whole of February 2020 instead of examining ways that sick people could get well? Why did they use burner phones? And that article debunking the lab leak in Nature, the one highly criticized later. How did that come about?

Mysteries abound about the vaccine trials. And wait until people have a look at the “Emergency Use Approval” documents submitted by the manufacturers. They will discover that the pharma companies never promised much at all. They certainly never said that the vaxx would stop the spread, keep people from being infected, much less end the pandemic. They never said that it would work against variants.

This is only a few of many remarkable shocks that will be pouring out over the coming years. Governments spent many trillions of dollars, most of which ended up in the pockets of well-connected elites in the corporate and banking sectors. The payoffs and graft connected with everything, from testing kits, to masks, to therapeutics will be alarming to behold. And wait until people figure out that all along we might have had solid generics that have a massive effective effect on early treatment.

All wars come to an end, but governments rarely think in advance about the exit strategy. Instead, they kill and destroy until exhaustion sets in and then try to sneak away hoping that everyone will just move on. That’s pretty much how things fared with the Iraq War, and the results were devastating for the whole world.

There are analogies to how governments are sneaking away from the catastrophe of the last two years. It’s been a war on people, a war on reality, and an attack on rights and liberties on a scale and scope that is without precedent in the modern age. None of it worked. Indeed, that is incredibly obvious now, and wholly humiliating and discrediting for vast swaths of the ruling class.

What kind of world emerges on the other side? There will be hatred against experts, elites, governments, media, pharmaceuticals, politicians, and deep-state bureaucrats. It’s already happening. And think of this: if it can happen in Canada, it can happen anywhere. Who would have imagined that it would be Canadian truckers who would step up and save the world?

It’s a lesson to all of us. It shows that only an active minority of people can make a massive difference, if they speak with moral conviction and courage. Everyone else follows, provided the message is clear and speaks to the reality all around us.

That, in a nutshell, is the case against despair. There is tremendous virtue right now in staying patient and letting the chips fall exactly where they have begun to fall. Yes, resignations would be ideal but regardless there will be a political realignment and a cultural rethinking.

Freedom can win in the long run. And the world will be rebuilt, on a much more solid foundation than was present two years ago. We tried an experiment in tyranny. It flopped. Despite the enormous cost of what took place, we will all find ourselves in a good position to see a rebirth of liberty, human rights, and prosperity on the other side.