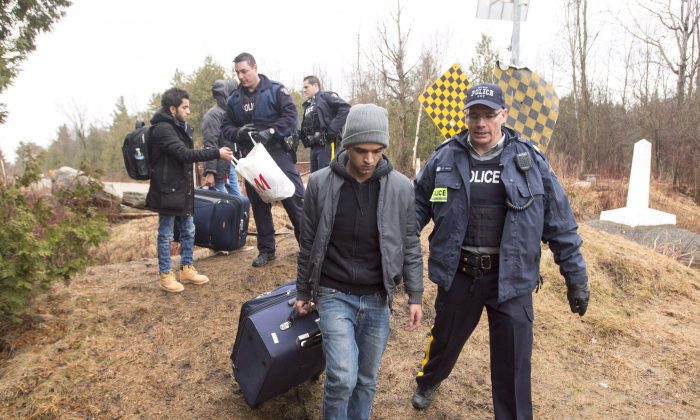 Asylum seekers claiming to be from Yemen are arrested by RCMP officers after crossing the border from New York into Hemmingford, Quebec, on March 8, 2017. (The Canadian Press/Ryan Remiorz)
Canada

OTTAWA—”Help keep our borders safe,” reads a recent fundraising pitch from the federal Conservative party—a plea the Official Opposition is linking directly to the increased flow of asylum seekers crossing illegally into Canada.

Since January, nearly 1,900 people have been intercepted by the RCMP crossing into Canada. Asylum numbers in general are on the rise, projected to be at historic levels by year’s end.

The Conservatives lost the last federal election in part because of a perception they were too tough on the world’s most vulnerable; the Liberals won it with a pledge to open Canada’s doors.

But the asylum seekers coming illegally into Canada have opened up a political can of worms and now both parties are rethinking their approach, each with a careful eye to how the politics of immigration played out in the United States.

“Since Justin Trudeau issued his open invitation on Twitter that ‘Canadians will welcome you,’ our country has seen an influx of asylum seekers illegally crossing our border from a perfectly safe country—the United States,” the Conservative fundraising letter said.

“It is during times like this that Canada needs strong, transparent leadership that will enforce our laws and keep Canadians safe,” it continued. “Help us set the course for victory in 2019.”

The asylum seekers coming illegally into Canada have opened up a political can of worms and now both parties are rethinking their approach.

In the Populism Project, The Canadian Press is exploring the factors behind Donald Trump’s upset U.S. election win, testing them against Canada’s current economic, social, and political climate to gauge the possibility of a similar kind of political upheaval.

Trump seized on immigration policy as a sure vote-getter in his campaign, framing the status quo as a physical and economic threat to America.

Trudeau’s #WelcometoCanada message, posted on Twitter in response to those orders, was a natural follow-through for the Liberals.

Many Conservative leadership candidates are taking hard-line stances, promising to step up border enforcement and deportations or close legal loopholes that allow those crossing illegally to file for refugee status.

Among them is Kellie Leitch. She visited the border town of Emerson, Man., over the weekend where hundreds of people have been coming across since January, and promised to deport the newcomers if elected prime minister.

Emerson is in a riding that’s been Tory blue for more than 15 years, so there’s not much political risk there for the Liberals if they’re seen as being soft on border controls.

Political wisdom in Canada also holds that Liberal messages of inclusion and diversity will win far more support with immigrants clustered in the riding-rich cities of Toronto, Montreal, and Vancouver than the tough Tory talk.

Then again, everyone expected Trump’s promised Mexican border wall and depictions of Mexicans as “bad hombres” would surely cost him the entire Latino vote. Instead, national exit polls suggested he won about 30 percent.

An online Ipsos poll for Reuters last month suggested nearly half of Canadians surveyed wanted action, and expressed dissatisfaction with how Trudeau is handling the file.

Some inside government say privately they agree with the Conservatives, and believe many border-crossers are being pulled into Canada by ‘Brand Trudeau,’ not pushed from the United States by Trump, as others have alleged.

But what’s vexing Liberals is what kind of policy response they could take to both protect the border and their brand. It’s not just a question of appeasing those on the right, but also holding onto the support they received from the left.

The Liberals do see another immigration-related political risk on the horizon—how the 40,000 Syrian refugees they’ve brought to the country will settle in.

The perception that Syrians are getting better access to jobs, education, and housing than other immigrants or those born in Canada is a problem the government has already identified, including in their evaluation of the first wave of the Syrian refugee program.

Integration challenges were also a key theme in last year’s annual government survey on immigration, which came before the end of the first year in Canada for most Syrian refugees, during which they get financial help from Ottawa or their sponsors.

With lower education levels and facility with English than previous groups of refugees, as well as larger families and greater medical needs, there is concern the population will take longer to achieve success, fuelling more government criticism.

When Trudeau has spoken up in recent weeks about Canada’s immigration policy, his answer has been shifting from a previous focus on the benefit of welcoming refugees to the importance of their outcomes.

That could be a pre-emptive strike, suggested Andrew Griffith, the former director of multiculturalism and citizenship for the federal government.

“Good politicians tend to fine-tune their messaging as needed,” Griffith said. “This may be perceived as such.”