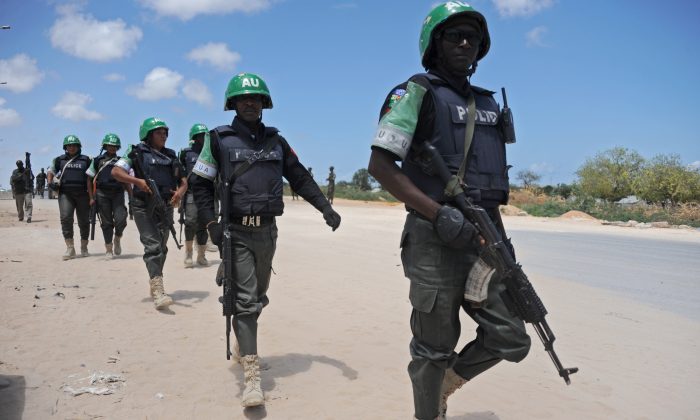 African Union Mission in Somalia (AMISOM) officers patrol around the Gashandhiga academy compound during celebrations of the 55th anniversary of the Somali military force, in Mogadishu, on April 12, 2015. (Mohamed Abdiwahab/AFP/Getty Images)
Africa

Opportunists in the war against terrorism

Almost every aspect of the security in Somalia is outsourced to deeply entrenched, competing foreign interests of various shades. None of them are accountable to the Somali government, not even the legally mandated African Union Mission in Somalia (AMISOM).

Contrary to the noble services that it provided in its early years, AMISOM has become a serious liability to stabilization and also the main obstacle to Somalia’s sovereignty. Like the IGAD—the Intergovernmental Authority for Development in East Africa—AMISOM has morphed into a politico-security monster that does not honor its mandate.

AMISOM played an aggressive role in legally ushering in the Ethiopian Trojan Horse. Currently, AMISOM is Ethiopia, and Ethiopia is AMISOM. Along with Kenya, Ethiopia espouses a thinly disguised zero-sum objective. For the last decade, the Ethiopian military has been aggressively pursuing power and economic benefits for Ethiopia, passing the pursuit off as a fight against terrorism.

Today, Ethiopia is the de facto leader of the military campaign to fight al-Shabab. And this is a serious problem.

In November 2013, right before the Ethiopian troops were accepted into AMISOM, I received a formal invitation from AMISOM’s political office to attend an event intended to solicit Somali diaspora support for the group. The event was to be held in a luxury venue in a third country, and it was to be attended by high level officials.

I thought to myself perhaps this would be a great opportunity to highlight why the inclusion of the Ethiopian army into AMISOM would be disastrous and, in the process, persuade the African Union leadership to turndown Ethiopia’s offer.

Sexual Terror and Impunity in Somalia

So, I laid a simple question to the official who invited me: “If I were to join you and in my presentation make a case against inclusion of Ethiopian forces into AMISOM would that be taken into consideration? Would it appear in your public literature?” Next day, I got his response, “Have you received details of the retreat?”

I thought he forgot to answer my question, so I repeated it. Next day, I got his response, “Please send me a copy of your passport so we can process your travel arrangement.” I repeated my question for the third time. Next day I received his response: “I can’t beg you. If you are not interested, I am sure others will jump on this invitation.” So I responded, “I am sure you would match well.”

The message was clear: welcoming Ethiopia into AMISOM was a fait accompli and the event itself was nothing more than a PR stunt to pre-empt any negative public sentiments.

The ‘global war on terrorism’ could not have been declared at a better time for Ethiopia.

Abyssinian Empire and Its Stooges

The “global war on terrorism” could not have been declared at a better time for Ethiopia. The late Ethiopian Prime Minister Meles Zenawi saw an opportunity to kill two birds with one stone. He could become a terror-preneur and position himself as the Horn of Africa’s Parvez Musharraf (Pakistan), while generating for his nation its direly needed resources and political backing to swallow Somalia, one piece at a time.

Meles was a Machiavellian visionary and a brilliant strategist. Though it was no secret that he came to power by the barrel of a gun and that he would only invoke the principles of “human rights” and “democracy” to hypnotize the progressive elements within his Western partners, he was lionized by the notorious neocon gang.

In 2002, Ethiopia released its Foreign Affairs and National Security Policy and Strategy, which also lays out its foreign policy toward Somalia. “Somalia has become a haven and conduit for terrorists and extremists. Anti-peace elements are using the country as a base and place of transit in order to threaten Ethiopia’s peace.”

In the same document, one of the main motives that compel landlocked Ethiopia to keep Somalia divided and to use all its means to install a cardboard president in each region is stated: “Starting from the port of Zeila … to Kismayo, there are no less than seven ports in Somalia that can be used by different parts of our country.”

The phrase often used by the beneficiaries of Ethiopia’s micromanagement of Somali political affairs is, “Itoobiya waa dowlad eynu walaalo nahay” or “Ethiopia is a brotherly state.” But, on the contrary, due to their shifting interests and alliances, states are never “brothers.” This moronic or naive perception of international relations secures Ethiopia the privilege to retain its embassy virtually within the presidential compound.

Almost a decade since AMISOM assumed the peacekeeping task, Somali soldiers remain poorly equipped and unpaid, thanks to a corrupt leadership busy squandering monies in luxury hotels abroad. With Somali forces in such a state, it is hardly surprising that the Somali leadership dependent on AMISOM for security.

In Somalia, fear is a traded commodity. Phenomena that perpetuate the fear include ghost assassinations of government officials, activists, and patriotic civil servants with institutional memories; and periodical suicide bombings that are never investigated. AMISOM bomb experts are notoriously absent from the scene—with photo opportunities being the only exception.

Furthermore, AMISOM routinely manufactures insecurity by abruptly evacuating towns and territories gained from al-Shabab. This is a tactic that Ethiopia has been known to use to manufacture insecurity for political expedience. The latest were the evacuations out of Burhakabe, El Salindi, and Kunturwarey. Al-Shabab reoccupied all three areas. In Burhakabe, among other atrocities, al-Shabab beheaded two brothers for “spying.”

Al-Shabab wreaks havoc in Somalia and Kenya, but not Ethiopia—supposedly its worst enemy.

Al-Shabab, which was estimated around 3,000 gunmen when the Ethiopian tanks rolled into the heart of Mogadishu almost a decade ago, is now a multinational corporation of terror that wreaks havoc in Somalia and Kenya, but not Ethiopia—supposedly its worst enemy.

Somalia was kept in a state of political uncertainty and security catastrophe in which no level of the state security apparatus is independent or wholly operated and governed by Somalis.

Ethiopia seems to have taken a page out of the playbook of the inventors of the global war on terrorism. In order to get leaders to dutifully march to the beating drums of jingoism, they must be psychologically terrorized beyond common sense.

In conclusion, no peacekeeping operation can succeed without the support of the local population; and, under the Ethiopian de facto command, AMISOM’s credibility has reached beyond repair. As I stated in the conclusion of my article titled “Somalia’s Sullied Security,” I would like to reiterate my call for the Somali government to request U.N. Blue Berets to replace AMISOM. A virtually similar call was recently made by the British think tank Chatham House.

Meanwhile, the fateful scenario of the stubborn python trying to swallow the wounded tiger continues to play itself out.

Abukar Arman is a foreign policy analyst and a former diplomat. He is also a founding member of the Gurmad Movement. Follow him on Twitter @4DialogSK.