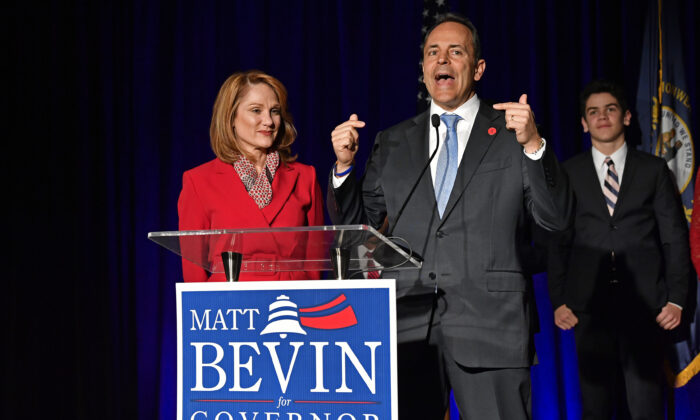 “Remember, remember, the fifth of November!” We might all remember that line from the movie “V for Vendetta” or perhaps the English rhyme commemorating the Guy Fawkes plot to blow up Parliament on Nov. 5, 1605.

But there’s now another reason to remember the fifth of November. This time, it’s the results of the off-year state elections. The results of the Kentucky election, in particular, hold important lessons for 2020 and for future generations of political figures being groomed on the politics of today.

Kentucky’s incumbent Republican governor was defeated in one of the most-red states in the United States. President Donald Trump is very popular in the Commonwealth; he’s projected to win Kentucky by 20 to 30 points in 2020. Just a few election cycles ago, the Republican Party swept away Democratic majorities in the state legislature and swept nearly every state-wide office. In the Nov. 5 election, the Republican Party continued its dominance, winning every statewide office—except one. What happened?

What happened is what I will call “Divisive Personality Disorder”—Gov. Matt Bevin had it and the voters made him pay for it.

Bevin has made a career, as short as it has been, out of being divisive and causing people great consternation. He rose out of the Tea Party movement and challenged the longtime incumbent senior senator, Mitch McConnell, in the 2014 primary. After that thorough drubbing, he turned his interest to running for governor and won the Republican nomination by less than 100 votes in a tight three-way race. He then went on to win the governorship.

Since becoming governor, Bevin’s “Divisive Personality Disorder” has been on full display. He has set about making big, bold moves, many of which needed to be made, but accompanied his aggressive moves with a divisive rhetoric that undermined confidence in his plans and alienated many voters. Most prominently, perhaps, the governor set about fixing the state pension system for teachers, which had been neglected badly by generations of Democrat governors and legislatures. But he did so by insisting that everything be done his way rather than be the product of honest negotiations.

He undermined efforts of his own party. He agitated and militarized state teachers who faked illnesses to march on the Capitol. He then proceeded to attack those teachers, even blaming teachers for their students being abused at home when they weren’t in the classroom because of the protests. He fired a member of Lt. Gov. Jenean Hampton’s staff without consulting her and then removed Hampton from the ticket before the election. He made outlandish claims and inflammatory remarks about any and all who dared question him.

What happened on Nov. 5 is that voters across the state went into the voting booth and voted for Republican candidates up and down the ballot. But enough of them either couldn’t bring themselves to vote in the governor’s race, voted for the third-party candidate, or voted for the Democrat, Andy Beshear. Bevin was outpolled by every other Republican candidate on the ballot by between 40,000 and 150,000 votes. He appears to have lost by only 5,000.

What do the Kentucky election results mean for U.S. politics more widely?

First, it shouldn’t provide little solace for national Democrats or even the Democratic Party of Kentucky. The Democrat won because the Republican was so flawed. The Republicans swept every other race, including newcomer Michael Adams defeating a popular and successful former Miss America to become secretary of state.

Second, national political figures should be watching Kentucky’s next attorney general, Daniel Cameron, who showed how enthusiastic Republicans are to embrace African-American conservatives as their standard-bearers.

Third, the Kentucky results should be a warning to Trump. Trump supported Bevin with tweets and photo ops and even came to Kentucky for a big rally the night before the election. The rally was raucous and enthusiastic, but even in this very red state, motivating the base wasn’t enough to win the election. The Republicans who won, and most won big, practiced a politics of addition, moving beyond the base with rhetoric that was less divisive and plans based on optimism for the future.

Trump’s own divisiveness has played pretty well for him so far in allowing him to hold his base, but the results on Nov. 5 should cause some pause as his campaign works to try to win in less-red states than Kentucky next year. One can win as a challenger in places where an incumbent often will struggle, and Trump is now the incumbent. The voters of Wisconsin, Minnesota, Michigan, Ohio, and Pennsylvania are much less Republican and conservative than those of Kentucky, and it will be hard to win them over again without a message of “addition.”

Fourth, a generation of young political leaders are currently being raised in an environment where “Divisive Personality Disorder” is rampant on both sides of the aisle—from the angry left, who seem always bent on having enemies and finding excuses, to the angry right, who often seem to value bloodying a nose more highly than accomplishing progress on policies.

Those up-and-coming political leaders need to remember the fifth of November and realize that rhetoric has consequences. The politics of addition wins elections; the politics of subtraction loses elections. Do big things, fix problems, and fight for the right, but remember that big things can often be done without unnecessarily alienating people and being offensive.

Our mothers taught us a core lesson of politics when they told us “you can attract more flies with honey than vinegar.” These recent elections are another reminder to those politicians who seem not to be listening to their mothers.

Gary L. Gregg is director of the McConnell Center and author or editor of numerous books on American politics including America’s Forgotten Founders.