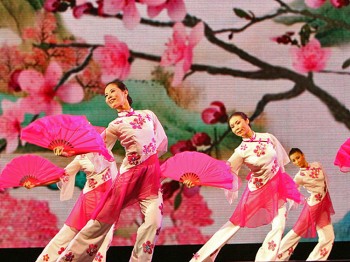 The Plum Blossom: A Symbol of Strength

In the midst of winter, before snow melts and the swallow returns, plum trees blossom onto the barren landscape, bracing the harshness of winter and reminding people spring will come. Celebrated here is the vitality of life, endurance through hardship, and hope that life will regenerate.

The plum blossom has been an important symbol in Chinese culture. As a “friend of winter,” the plum blossom most vividly represents the value of endurance, as life ultimately overcomes through the vicissitude of time. The fragrance of plum blossoms “comes from the bitterness and coldness,” as the Chinese saying goes. Souls are tempered in the depth of experience, growing in inner strength and unyielding courage.

Unity of culture and nature has been an important part of the Chinese tradition, and elements of nature embody important cultural values. The plum, together with the orchid, bamboo, and chrysanthemum, have been named the “four nobles” of plants by the ancient Chinese, each because of its noble characteristics, such as purity (orchid), uprightness (bamboo), and humility (chrysanthemum).

Zhu Xi, a noted Song Dynasty Confucian scholar, gave the plum four virtues: the great potential in the bud, prosperity in the flower, harmony in the fruit, and rightness in its maturity—all of which embody the characteristics of heaven (qian), according to the Book of Change. Chinese also see the five-petaled flower as symbolizing five blessings: longevity, prosperity, health, virtue, and good living.

Plum, or Prunus mume, is an arbor that originated in southwest China. For over 3,000 years, plum trees have been planted in China, including North China, where the winter is colder. From China, the plum spread to Korea, Japan (where the plum is called “ume”), and later to other countries as an ornamental plant. The plum tree flowers before its leaves come out in the spring.

Plum blossoms typically have five petals, single- or multi-layered, with the colors pink/red, white, and yellow as common. The pink/red variety is used often for the Chinese New Year in late January and early February.

China has a long history of using and enjoying the plum tree and its flower. Plum fruit has been used for food for more than 3,000 years, and plum blossoms have been appreciated in gardens and around homes for over 2,000 years. In the 5th century, princesses and court women started to use plum blossoms for decoration, and this helped make the flower popular.

The plum blossom has been an important object for poems and paintings since the Tang Dynasty, reaching a peak during the Song Dynasty. Under the brush pen of literati and artisans, the plum blossom’s spirit was celebrated.

For poet Lin Bu of the Song Dynasty, the flower was more than a symbol, but a friend and soul mate. His famous verses about the plum blossom have been passed down through generations:

Lu You, another Song Dynasty poet, is also known for poems about the plum blossom. In “Ode to Plum Blossom,” he described:

I used to ride a horse to visit Western Chengdu,
Intoxicated with the sweet smell of plum blossom.
Fragrance continued for twenty li,
from Qingyang palace to Huanhua brook.

The poet expressed the wish of being one with the plum blossom:

How can I transform my body into millions,
each enjoying the blossom by a plum tree.

Su Dongpo, also a celebrated Song Dynasty poet, is probably responsible for the style of art that focuses on portraying the inner spirit of nature, rather than its outer forms. He said, “The beauty of the plum goes beyond the sour taste of its fruit.” His idea of transcending the physical deeply influenced the painting of plum blossoms, especially in the style of “ink plum,” using only the black ink to paint the plum tree and blossoms.

Shi Zhongren, the creator of the “ink plum” style on silk, was a monk during the Song Dynasty. The noble nature of the plum blossom requires, as the Chinese believe, that painters of the flower be noble people. Shi cultivated an inner awareness that is important for his art, and his paintings were considered “wordless poetry.”

“Plum painting requires plum’s nobility; the purity of the painter follows that of the plum blossom,” said Wang Mian of the Yuan Dynasty, who followed Shi in the ink-style painting of the plum blossom. Unlike Shi’s style with a few branches and plum flowers, Wang painted many branches and plum flowers, expressing uprightness and enthusiasm. Wang lived in seclusion where he planted thousands of plum trees around his living quarters “House of Plum Blossom.” His poem on the plum blossom bears resemblance to his own life:

Situating in the forest, with ice and snow,
not mixing with the dust of peach and pear flowers.
Suddenly fragrance emerges one night,
spreading to heaven and earth, bringing spring to all the land.

Since the Tang Dynasty, each generation of poets and painters has enjoyed its noted artists of the plum blossom.

Today, Shen Yun Performing Arts brings the plum blossom to the stage of classical Chinese dance, celebrating its purity, beauty, and forbearance. Indeed, the entire Shen Yun performance can be captured by the plum blossom since, despite the suffering, hardships, and loss of Chinese culture, hope is eternal, and renewal is not far away.