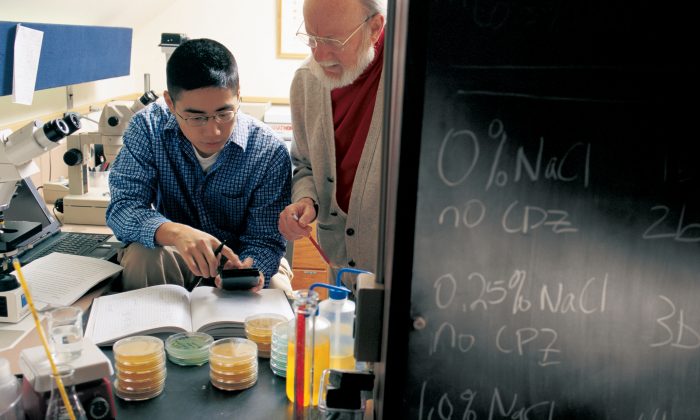 The Philosophy of Chemistry—and What It Can Tell Us About Life, the Universe, and Everything

Philosophy asks some fundamental and probing questions of itself. What is it? Why do we do it? What can it achieve? As a starting point, the word “philosophy” comes from the Greek words meaning a love of wisdom. And anyone who does it is trying to make sense of the world around them. In that way, philosophers are a bit like scientists.

But science is a big enough subject in itself, so warrants its very own branch of philosophy. And if we can break scientific inquiry down into various subjects, why not do the same with its philosophy? This is what has happened with the development of the Philosophy of Chemistry, a relatively young and niche field of philosophical investigation. It poses unique and interesting questions concerning both the kind of knowledge acquired in science, and the understanding of nature itself.

Some discussions within the philosophy of chemistry concern issues that are closely related to the philosophy of science. The ideas of explanation, laws of nature, and realism are investigated using the specific theories, concepts, methods and experimental tools of chemistry. It sounds complicated, and sometimes it is. But examining scientific theories such as quantum mechanics from a specifically chemistry focused standpoint can help clarify our wider understanding of scientific ideas. What exactly is a molecule? What do we mean when we say “chemical bond”? Can we predict and explain the behaviour of chemical matter within quantum mechanics? They are big questions, and benefit from a philosopher’s approach, breaking down assumptions and rules to their bare bones.

And these philosophical questions are interesting not just to philosophers of science but also to scientists themselves. The answers have direct implications upon the autonomy of the sciences, and the unity of nature. For example, it could be argued that the very subject of chemistry is distinct and independent from the subject of physics, and that it involves concepts which have an effect on reality.

Just as individuals that are composed of millions of cells exhibit unique features and properties as a whole, molecules and chemical bonds are real entities that deserve a separate investigation from the electrons and nuclei of which they are composed. These are issues that create heated debates among philosophers of chemistry and which have important implications for our view of the significance of the sciences, and on our view of nature.

Chemistry is also unique in the methods and models it employs. As a subject it is considered a scientific discipline quite distinct from physics, in that it is much more strongly based on the use of empirical methods in order to arrive at explanation and prediction.

In contrast to physics, which is mostly discussed through the language of mathematics, chemistry has developed a distinct language which is organised and classified in terms of the periodic table. Chemistry also uses unique visual representations of the structure of molecules in order to understand and explain the intricate structural differences and chemical properties of substances. This uniqueness of chemical practice and theorising means it deserves its own distinct philosophical investigation.

Philosophers of chemistry also examine the defining features that chemists use in order to differentiate and classify matter into substances, elements, compounds, and mixtures. An important aspect of this is the investigation of the role of the periodic table which classifies and groups elements in terms of their similarity in particular chemical properties. The historical investigation of how such classifications changed over time and what kind of discoveries contributed to these changes, plays an important part in these discussions.

From Chrome Plating to Nanotubes: The ‘Modern’ Chemistry First Used in Ancient Times

In fact, it would be wrong to ignore the importance of the history of chemistry to the current philosophical investigations within the field. The perception of chemical concepts, such as the atom, has significantly changed since antiquity with the progress both in chemical experimentation and in physics.

Vanessa Seifert is a Ph.D. candidate at the University of Bristol in the U.K. This article was originally published on The Conversation.