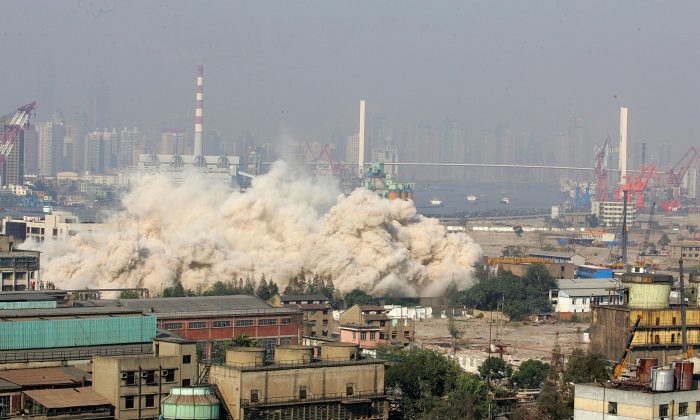 Two nearly complete luxury housing estates in Tianjin, once the envy of builders because of healthy pre-sales, will be torn down due to dried up credit and multiple safety violations, Chinese media reported.

In China, it is not uncommon to see relatively new buildings torn down, wasting an average of over $70 billion a year, according to research conducted by China Academy of Building Research (CABR) in 2014.

The two luxury residential complexes in Tianjin were found to have had many safety violations. One frustrated condo owner, Zhang Xin, told Faren (a luxury magazine in China) that she learned that the eight buildings in her complex were built too close together.

Experts in Tianjin mapped out the building last year and found the design falls below standard in terms of provisions for emergency evacuation, including building apartments where the evacuation space should be, and making the public space in the first and second floors of buildings No.1 to No.4 too narrow.

“It is unimaginable how the plans, which violate the rules so flagrantly, were able to pass through so many levels of evaluation,” Zhang angrily told Faren. And when she consulted the government department in charge, she was told that it’s none of her business as a condo owner.

It’s expected to cost upward of $9 million to demolish Mingmen Hall, one of the two housing estates. At the other estate, located in the commercial district of Tianjin city, three of the buildings are essentially complete with the roofs already in place, and may cost even more than Mingmen Hall to tear down.

While poor construction is the issue in some cases, commercial interests were leading cause, 46 percent, of early demolition in an investigation of 54 publicly reported cases examined by CABR.

For example, Water World Summer Palace in Shenyang, a giant indoor water park, was built in 1994 at an investment of $30 million. In 1997, it was named one of the 10 best sites in Shenyang and was a city landmark.

Yet In 2009, the 15-year-old building was reduced to rubble in two seconds, under the power of 900 kilograms (nearly 2,000 pounds) of explosives, because the land was slated for real estate development.

Other reasons cited by CABR for demolishing relatively young buildings include short-sighted behaviors such as image and prestige projects, as well as lazy urban planning, the unsound legal system, and low construction quality.

“The essential reason is that the land in China is state-owned and is too easy to demolish. Residents don’t have legal rights or regulatory guarantees,” Ding Li, an economic administrator at an investment and consultancy company told Radio Free Asia in explaining the phenomenon.”Even though there are some legal regulations, local officials or developers can disregard them.”

According to China Statistical Yearbook 2012, between 2006 and 2010, the ratio of building demolition to building construction was 23 percent. This high rate of demolition was calculated to produce about 400 million tons of extra construction waste and approximately 10 percent extra carbon emissions every year.

With reporting from Zhou Huixin