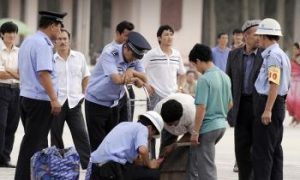 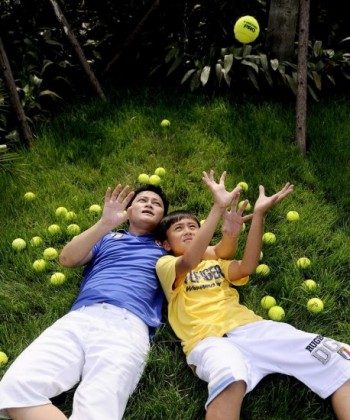 Li Chengpeng and his son in a sponsorship ad for the boy's tennis talent by a nonpolitical company promoting healthy interaction between parents and children. Authorities banned the image from being printed in newspapers. (Li Chengpeng's blog)
China

In communist China, seeking to run for political office as an “independent candidate” for the National People’s Congress (NPC) is a perilous pursuit. A prominent Chinese sports reporter, who recently nominated himself, is finding not only his own ambitions being thwarted by authorities, but also his son’s dreams of becoming a tennis star being cut short.

2011 has seen a wave of everyday people, as well as some prominent figures, coming forward as independent candidates in local elections for the NPC. Although legal under the Chinese constitution, the Chinese state media has dismissed these grassroots efforts as illegal, and many obstacles have been thrown in these candidates’ paths.

Li Chengpeng, a well-known sports reporter and commentator in China, announced in late May that he would run for office as an independent candidate in the Wuhou District of Chengdu City, Sichuan Province.

But already, Li has run afoul of the authorities, and now his son is also made to pay for his father’s ambitions. On June 18 Li said on his blog that his running for office has deprived his son of a sports sponsorship opportunity.

Li said his son’s dream is to someday become a tennis star like Rafael Nadal, and Li has been spending around one hundred thousand yuan (US$15,447) on his son’s tennis training every year.

Li said, in the aftermath and euphoria of Chinese tennis star Li Na winning the French Open women’s final, a Chengdu company offered to sponsor his son with a father-son advertisement campaign for “Green Seed Plan,” a nonpolitical project promoting interaction between parents and children, and raising healthy children.

However, after a photo of Li and his son about pursuing the tennis dream was published, a “mysterious” government department ordered the corporate sponsor to cancel all contracts and remove all commercials with Li’s son.

Li tried to save the deal by asking the sponsor to remove Li’s image from the photo and replace it with a tennis racket or a dog. But the sponsor said that the unidentified department had prohibited the publication of any material affiliated with Li, including photos of his son.

Li said he believes the true reason behind the cancellation is his attempt to seek NPC candidacy. His name has thus become a “sensitive phrase” and so has his son’s, which in turn disqualifies his son from accepting corporate sponsorships.

Li would not reveal which department is pressuring him, and said that he was not sure, but was determined to move forward with his plan.

“I strongly uphold the rights that this nation’s laws have bestowed upon me … they may be able to stop a fierce train but not a stubborn father,” Li said.

Li is widely known in China for his pungency and humor. In his 20 years of reporting, he has attracted many followers for his bravery in pointing out social problems. His outspokenness has also resulted in his suspension from his job, and he was even forced to write self-criticism papers, according to a June 25, 2010 NTD Television report.

Li’s candidacy announcement for the Chengdu NPC seat in late May spurred a wave of independent candidates to come forward.

However, regime mouthpieces Xinhua and CCTV have recently stated that independent candidates are illegal, and many candidates have been interrogated and monitored by police, or taken into custody.

Cao Tian, a real estate businessman, author, and former 1989 political prisoner, is another independent candidate who announced that he is running for mayor of Zhengzhou in Henan Province. Cao vowed that if elected, he would not accept wages during his time in office, and put in one hundred million yuan (US$15,447,100) in earnest money for clean politics.

As a form of harassment, Cao is being investigated by local Zhengzhou authorities, including the Land and Resources Bureau, the Public Security Bureau, and the Taxation Bureau. Recent microblog posts have revealed that Cao has been forced to leave Zhengzhou. His current whereabouts are unknown, according to Voice of America (VOA).

Beijing-based legal scholar Chen Yongmiao told VOA that he has warned Cao about reprisal from authorities, such as being audited by the Taxation Bureau. He said Cao was very confident. Though he had a phone call from a Henan provincial officer two days before he announced his candidacy for Zhengzhou mayor, warning him not to get involved in these things, he didn’t back down.

Chen said Cao, and other independent candidates, should be praised for their spirit. However, the effort to reform China’s constitution has only resulted in establishing a civil society and in the accumulation of power outside the system and outside the box.

“People shouldn’t have any illusions that they can enter the box and rearrange things on the inside. The communist party will not let anyone else have access to its power. This route is impossible,” Chen said.