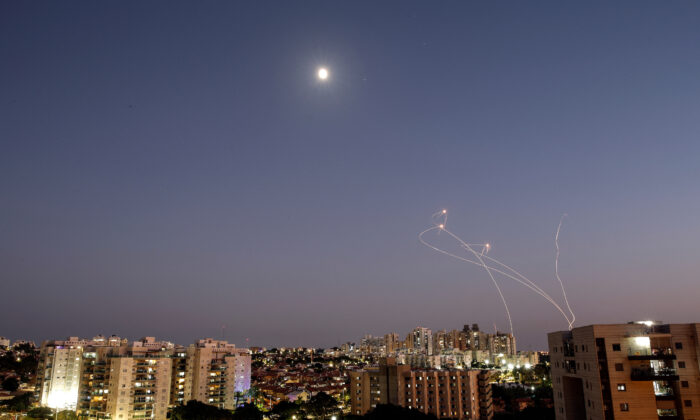 Streaks of light are seen as Israel's Iron Dome anti-missile system intercept rockets launched from the Gaza Strip toward Israel, as seen from Ashkelon, Israel, on Aug. 7, 2022. (Amir Cohen/Reuters)
Viewpoints

In Israel’s next war, it could face a perfect storm with Iran attacking it from the east, Hamas in Gaza from the south, Hezbollah in Lebanon from the north, and an insurrection from within by Israel’s large Arab population. Israel’s civilian casualties could be immense as tens of thousands of missiles rain down on it, overwhelming defensive systems such as Israel’s much-vaunted Iron Dome.

The shot that ignites the war would be an Israeli attack on Iran, which is believed to be on the verge of securing a nuclear bomb, and which is on record in its desire to eradicate the state of Israel. For its part, Israel is on record with its intention to eradicate Iran’s nuclear bomb-making ability, and it has the track record to show its seriousness.

The precedent of pre-emptively destroying nuclear plants, known as the Begin Doctrine, was announced by Israeli Prime Minister Menachem Begin two days after the 1981 bombing: “We chose this moment: now, not later, because later may be too late, perhaps forever. And if we stood by idly … another Holocaust would have happened in the history of the Jewish people,” he stated at a press conference. “Never again, never again! Tell so your friends, tell anyone you meet, we shall defend our people with all the means at our disposal. We shall not allow any enemy to develop weapons of mass destruction turned against us.”

Hussein, without the ability to retaliate against Israel 500 miles away, stood down, despite the humiliation. Al-Assad, whose country borders Israel, also decided to stand down, reportedly out of fear that Israel would respond to Syrian retaliation with Israel’s own nuclear bomb. Exercising discretion over valor, Assad kept the destruction of his reactor a secret, as Israeli intelligence expected he would, avoiding the public humiliation of failing to act.

If Iran’s mullahs, like Syria’s al-Assad and Iraq’s Hussein, decide to stand down after a successful Israeli attack on its nuclear infrastructure, Israel will have lived to fight another day. But the mullahs, religious fundamentalists who await the end-of-days return of the Twelfth Imam, may have a different calculation than the secular al-Assad and Hussein. The current Supreme Leader, Ayatollah Ali Khamenei, is a fervent Twelver, as was Ayatollah Ruhollah Khomeini, the father of Iran’s 1979 Islamic Revolution in Iran. Khamenei might well take an Israeli attack as a signal that Judgment Day has finally arrived, and unleash the dogs of war to bring about the military triumph that will establish Islam as the world’s ruling faith.

Unlike al-Assad and Hussein, who were relatively powerless to confront Israel, the mullahs can rain fire on Israel, an objective they have been working toward for decades. Iran has some 3,000 missiles, many of which have the range to reach Israel, as well as attack drones. But Iran’s greater threat comes from its proxies, which sit on Israel’s border.

In Gaza, Hamas has an estimated 8,000–10,000 rockets and Palestinian Islamic Jihad 5,500, most financed or smuggled to them by Iran. These missiles are all trained on Israeli targets, chiefly population centers in Israel’s south. In past wars with Gaza, although Hamas has launched its rockets in clusters so as to overwhelm Israel’s Iron Dome defence, Israel has nevertheless managed to neutralize some 90 percent of the rockets by redeploying Iron Dome batteries to the southern front.

If Hezbollah in the north simultaneously joins the fray, however, Israel’s Iron Dome will be utterly overwhelmed. Hezbollah, which has an estimated 150,000 rockets, intends to fire 4,000 a day when war starts with Israel, and then continue at the rate of 2,000 a day. Simultaneously, Israelis could be facing another Intifada—a realistic prospect since Israelis recently experienced a rash of random attacks on city streets by ISIS-inspired Israeli-Arabs.

With the prospect of Israeli civilians slain on city streets by an Arab insurrection and by rockets fired upon them from both north and south, Israel would have little choice but to mobilize its reserve army and go on the offense against Hamas, Palestinian Islamic Jihad, and Hezbollah.

The casualties could be high for Israelis and Arabs alike. Because the Arab rockets tend to be fired from mobile launchers located within disparate civilian areas in Gaza and Lebanon, bombardments of launch sites would claim a large number of civilian lives, and likely fail to fully stop the fire. Israel might then feel compelled to invade its neighbors, where house-to-house combat would claim many on both sides.

Israel has no good options, and also no allies that it can count on. The Biden administration has been cool to Israel and might even be reluctant to resupply Israel with weapons. Russia, which until recently greatly aided Israel in its efforts to prevent Iran from arming Hezbollah, has also become cool following Israel’s criticism of Russia’s invasion of Ukraine.

Israel’s predicament comes of wishful thinking. Following international condemnation, in 2000 Israel abandoned a six-mile-wide security strip in southern Lebanon, where it had supported the Christian South Lebanon Army (SLA) in its war against Hezbollah, a terrorist organization bent on Israel’s destruction. The kudos Israel hoped for by withdrawing didn’t materialize. Instead, the SLA Army soon collapsed, leading to Hezbollah’s rise as the effective governing power of Lebanon.

Then in 2005, Israel unilaterally left Gaza to the Palestinians, a decision that involved forcibly removing its 8,000 Jewish residents. Gaza, too, became a terror base intent on Israel’s destruction. Wishful thinking also led Israel to delay taking out Iran’s nuclear infrastructure before it became hardened, based on Western assurances that a diplomatic solution could be found.

Israeli restraint never led to the goodwill and safety the wishful thinkers hoped for. It only delayed the day, and worsened the odds, that Israel will face in its inevitable reckoning.