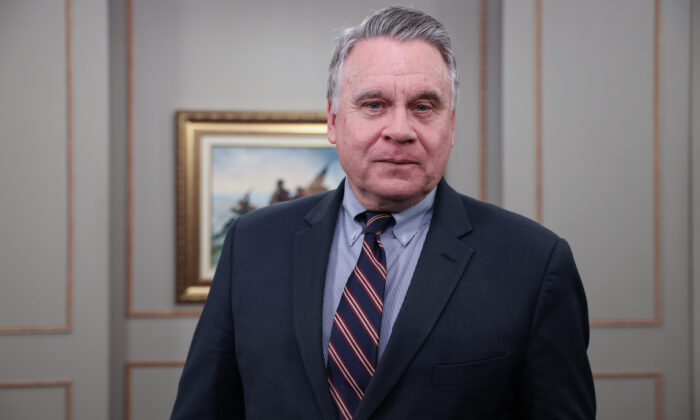 ‘The People of China Deserve Better’

“The Chinese communists game the system,” Rep. Chris Smith said. “People are afraid to stand up to them.”

In this episode of “American Thought Leaders,” host Jan Jekielek discusses human rights and China with Smith, a representative of New Jersey’s 4th district. For the past four decades, Smith has been one of Congress’s most vocal critics of the Chinese Communist Party, as well as the U.S. policies that have enabled the regime’s abuses—from forced organ harvesting of Falun Gong practitioners to genocide of the Uyghur Muslims in Xinjiang.

Jan Jekielek: I want to talk to you about how we got to this place where the Chinese regime has hosted the 2022 Olympics and is kind of laughing at the world about the egregious genocides and human rights violations there. It wasn’t always like that.

Rep. Chris Smith: You’re absolutely right. There was always an understanding of the human rights abuses, for example, by the Soviet Union. But with China, there’s a double standard, this inability to understand that the Party is vicious and cruel. It uses torture to make people compliant, to punish and kill them.

They use it against the Falun Gong, Christians, Buddhists, Uyghurs—any political dissidents.

And we’ve enabled them. On May 26, 1994, Bill Clinton de-linked human rights from trade. That’s when the Chinese Communist Party said, “These guys are bluffers. They’re fake.”

Mr. Jekielek: That’s an important date you mentioned. Since 1994, the United States and others have helped build the world’s greatest dictatorship.

Rep. Smith: Absolutely. There was forced abortion on countless numbers of Chinese women, and now all the other human rights abuses—the crackdown on the Falun Gong, for example, and the organ harvesting.

In 2014, I introduced the Hong Kong Human Rights and Democracy Act, and all the big know-it-alls said, “Don’t do that. [Xi Jinping will] never go after the UK–Sino treaty. He won’t undermine the special nature of Hong Kong.” I said, “Yes, he will. You don’t understand Xi Jinping. He’s a dictator with few equals in the world.”

And sure enough, they’ve crushed Hong Kong. It’s no longer a bastion of freedom.

The Chinese communists game the system. People are afraid to stand up to them.

Mr. Jekielek: You often hear that these are cultural differences, right?

Rep. Smith: In a meeting between Barrack Obama and the premier of China, Hu Jintao pretended to have some problems understanding a question about human rights. So Obama weighs in and says, “Oh, they have a different culture and different political system.” He was giving them cover for their horrific abuse. He enabled them. All too often, American politicians, particularly Obama, Clinton, and now Joe Biden, come across as weak and feckless.

I am the chief Republican sponsor of a bill that I hope the Biden administration implements. It says any products coming out of Xinjiang, the presumption will be they were made in concentration camps unless proven otherwise.

We should do that with the rest of China. I’m going to introduce more legislation soon. It will support serious and sustained progress in the area of human rights and will apply to all goods coming out of China. We have leverage. They’re an export economy. Without that, the economy grinds to a halt. And if that’s what it takes to protect people from slave-like conditions, then we have to do it.

Mr. Jekielek: But with the investments of wealthy Americans, corporations, and banks in China, can such legislation have teeth?

Rep. Smith: For a while, you could say people were naïve believing China would evolve, but the profit motive also elbowed out any concern about human rights.

And we just keep misperceiving the Party’s true intent, which is always to consolidate and expand its power. Look at the Confucius Institutes in our country. The Chinese give money to a college and handpick the Chinese teachers for these institutes. It’s all about soft power.

Years ago, Steven Mosher was a doctoral student at Stanford University who broke this story about the use of forced abortion to implement China’s one-child policy. What did Stanford do? They cashiered Mosher out of the program because they wanted to keep their access to China.

A lot of people always have a good word for the Chinese dictatorship. Let me be clear. I stand with the Chinese people who are being oppressed, not with the oppressor. The Chinese people deserve democracy. They deserve everything that’s embedded in the universal declaration of human rights.

Mr. Jekielek: You mentioned the regime’s hatred for Falun Gong. Why is that?

Rep. Smith: They saw that if a group like Falun Gong can organize, that group needs to be crushed. They want to crush independent thought as well.

So there was a hatred toward the Falun Gong, demonstrated by the Party’s use of torture and murder. And of course, organ harvesting became not just a means of repression, but also a way of making huge amounts of money by selling their organs.

Mr. Jekielek: We’re definitely going to talk about organ harvesting because you have a bill up about that. But briefly let’s talk about the Olympics. We just finished the 2022 Olympics. In 2008, everyone said, “This is China’s opportunity to show it’s going to be good on human rights and join the world community.” And of course, that didn’t happen. Here we are again in 2022. How do you see that?

Rep. Smith: In 2014, the International Olympic Committee chose China for this year’s Winter Olympics. Xi Jinping’s government made some promises about human rights which they not only didn’t keep, but they were simultaneously planning the genocide against the Uyghurs.

In 2018, Marco Rubio and I were co-chairs of the China Commission. We wrote to the IOC, saying, “Don’t go to China. Find a different venue. You can’t do this in a country that horrifically oppresses its own people and is committing genocide.”

I mean, that’s the worst crime on the face of the earth, and they’re doing it. There’s Xi Jinping smiling for the cameras at the opening ceremonies while butchering people.

One more thing: We had some corporate sponsors of the Olympics appear before our China commission. These people couldn’t say, “Yes, they’re committing genocide, and this has to stop.” They want to keep their market share. They want to make money. I’m a capitalist and believe in making money, but with conditions. You shouldn’t make money on the backs of repressed people.

Rep. Smith: In the mid-1990s, Harry Wu made me aware of the killing of prisoners to take their organs. We actually got a Chinese policeman who defected to testify. He brought credible documentation that included pictures of how they would shoot, but not kill, immediately take out organs, and then finish the job and even make the families pay for the executioner’s bullets.

They were focused on prisoners in general, political prisoners mostly. And then the Party started going after the Falun Gong, and some others too, to take their organs.

It’s very lucrative. Lots of money is made. And they just take their organs while the victims are still alive. They don’t execute them and then take them. They take them so that they’re as fresh as humanly possible. Then they sell them.

People come from abroad and get these organs. It’s a nightmarish abuse. So I have a bill, and Sen. Tom Cotton [R-Ark.] has the companion bill. We’re working hand-in-glove together. We want to hold to account all those who are part of this process.

Rep. Smith: We need to redouble our efforts to expose human rights abuse in China. We must also stand in solidarity with Taiwan. Hong Kong has fallen. Is Taiwan next? Taiwan is a wonderful country where democracy is flourishing.

Taiwan has its flaws. So do we. But it’s not a dictatorship, and that’s what the Party wants to impose on it.

So we need to employ a robust diplomacy. Unfortunately, our horrific exodus out of Afghanistan sent precisely the wrong message to every dictatorship in the world, from North Korea to Iran, to Putin, to Xi Jinping.

But if we were to reconnect human rights with trade and say, “We’re not kidding. Stop abusing your people. There needs to be serious efforts to protect the rights of your people,” I think some Chinese moderates might emerge. But right now, the direction is all wrong.

Trade is our most potent means to get them to change.

Rep. Smith: We need to pray for the people of China. They have suffered so much for so many decades.

We also need to be wiser as policymakers and play more chess and less checkers. We should think about what the next moves of this dictatorship might be and not enable it or ignore it. The people of China deserve better.