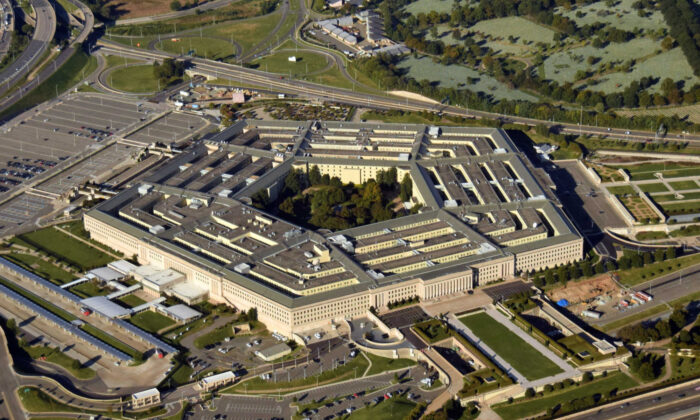 The U.S. Pentagon building in Washington is seen in an aerial view in an undated file photo. (Ivan Cholakov/Shutterstock)
Viewpoints

The Pentagon Owns Its Recruiting Crisis

Replenishing the military ranks with qualified personnel is a perennial challenge. It’s no secret, though, that this year, our armed forces are fighting uphill to recruit and retain talent.

Most of the services are well behind their quotas. But the Army, our largest service, is having the hardest time enticing young Americans. That service will fall short, nearly 20,000 troops from its original target end strength of 485,000 for fiscal year 2022, and next year could be worse.

To manage, Army officials have slashed end strength and enlistment goals, while recruiters are offering fat stacks of cash and generous service terms as inducements.

So far, nothing is working.

The Army’s chief of staff, Gen. James McConville, blames the shortfall on competition with the private sector. Others blame upwardly mobile families who would rather have their children attend college than wear a uniform.

Both are old saws. And this year, they ring hollow.

Some civilian jobs do pay more. But for an 18-year-old with only a high school diploma, military compensation is nothing to sneeze at. Indeed, recruits most often cite generous pay and benefits as the reason for signing papers.

Meanwhile, undergraduate enrollments are down more than 600,000 from last year. So it appears our missing recruits aren’t trading rifles for books, either.

Instead of blaming their competition, the Pentagon brass might dwell on their tarnished image as the reason fewer young Americans want to join up.

Public trust in the military institution has plunged steeply since 2018, according to one poll. Respondents cite politicized leaders, scandals, and the bungled withdrawal from Afghanistan for their loss in confidence.

We might add to that list suicides, sexual assaults, social justice indoctrination, and COVID-19 vaccination policies as dulling the shine of military service.

Of the lot, the Pentagon’s vaccine mandate may prove its deepest self-inflicted wound.

While the service chiefs are begging Congress to fund more generous recruiting incentives, they have forcibly discharged thousands of vaccine dissenters—including most of those objecting on religious grounds. A similar fate awaits tens of thousands more of the unjabbed in the National Guard and Reserve. Never mind that our military increasingly relies on these part-time troops for routine mission support.

And the Pentagon has doubled down. Submission to the vaccine is now a condition of enlistment, despite evidence the therapy is at best ineffective, and at worst dangerous for younger, healthier people.

It’s a policy gravely alienating to the families of Middle America whose children disproportionately serve in our all-volunteer forces.

Before going further, consider that fewer than one-quarter of Americans in the prime recruitment ages of 17 to 24 years can meet our military’s physical, moral, or educational entry requirements, and that figure continues to decline.

Of those, only about 9 percent of young Americans have any desire to serve. Perhaps only 1 percent ever do.

High standards have produced something of an embarrassment of riches. Our service members are amongst the healthiest, most disciplined, and best educated of their cohort nationally. But to maintain this quality, recruiters have come to count on solidly middle-class families inhabiting our mid-American towns, suburbs, and rural counties to fill their quotas.

Recruiters bank on small-town America because for a variety of reasons, our populous cities produce few qualified volunteers. Even the New Yorkers and Californians in the ranks are more likely to hail from upstate or inland counties. In fact, a once-reliable third of all new recruits enter from just five southern states: Texas, Florida, Georgia, North Carolina, and Virginia.

The prepossessed term for these rich recruiting grounds is “flyover country.”

Instead, we might think of them as communities celebrating life on a smaller and more intimate scale, and where patriotism, faith, family, and public service remain in fashion.

And yet their young people aren’t signing up like they used to.

The belief by some that vaccine mandates are meant to purge conservative Christians from the armed forces may be one reason recruiting offices are empty. After all, young people living in these prime recruitment areas are somewhat more religious and tend to be more conservative in outlook than many Americans.

They also are less likely to be vaccinated against COVID.

A more charitable account, though, is that the brass authored their own Catch-22 in the rush to prove their obedience to President Joe Biden. As such, they have taken a position purported to improve readiness that has done quite the opposite. And now that they’ve become so thoroughly entrenched, they cannot easily retreat.

No matter. It should trouble the Pentagon more that their reluctant recruits are most likely military legacies.

Like many professions, the military is a family business. Roughly 80 percent of recruits either grew up in a military family or have a close relative who served. McConville’s own clan is actually something of a poster family in career following, with three children and a son-in-law in uniform. Even the general’s wife once served.

Career following in military families is nothing new. It’s been going on since our country’s founding. The children of veterans, like those of bankers or physicians, often emulate their parents’ professional ethos early on. For soldiers, this includes a respect for duty and honorable, selfless service. The generational transmission of such virtues has played a critical role not only in reproducing our service cultures, but by extension our national values.

But it’s also a fragile chain.

While research indicates that military children are five times more likely to follow a parent into the service, only 1 in 4 do. And their desire to serve drops sharply every year over the age of 18.

In short, the Pentagon’s stubborn adherence to its COVID protocol is breaking faith with its once-loyal base. And the longer they dig in, the smaller that base will become.

It’s a high price our nation may pay for unimaginative leadership.