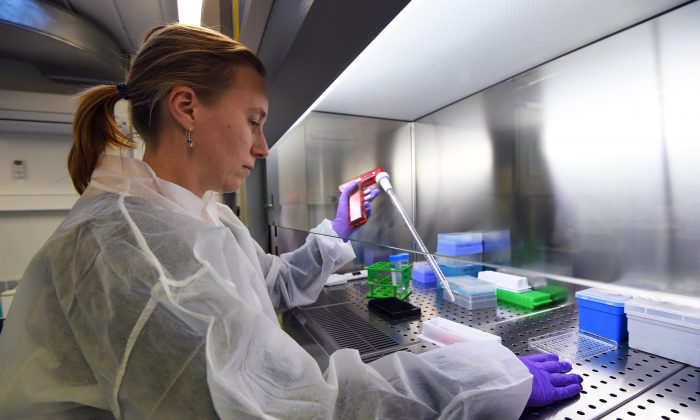 TO GO WITH AFP STORY BY THIBAULT LE GRAND Caroline Gouarne, researcher in cell biology, uses a solution of a molecule called olesoxime to run a test on the survival of motor neurons, on February 3, 2015 in the office of French biotechnology company Trophos, in Marseille, southern France.
Tech

The Pentagon Is Throwing More Money at Genetic Engineering

DARPA, the research branch of the Department of Defense, awarded a $32 million contract to the Broad Institute at MIT this week to research genetic engineering with “medical, industrial, and agricultural applications” that are too expensive for private industries.

At the Institute, researchers attempt to decode the genomes of a broad range of organisms so that the DNA for individual functions can be isolated, extracted, and added to a library to be used for the customization of other cells, and eventually, larger organisms.

“Products from synthetic biology have been limited to small, simple organic molecules. I want to change the scale of genetic engineering to access anything biology can do,” MIT biological engineering professor Christopher Voigt said in a statement.

DARPA’s interest in genetic engineering dates back at least to 2010, when it budgeted $6 million for BioDesign, which aimed to eliminate “the randomness of natural evolutionary advancement.” Imagined products included cells that could live forever and bacteria that could be killed off instantaneously.

In 2014, research funded by DARPA produced genetically modified blood cells that could deliver various toxin-neutralizing antibodies, which soldiers could receive through a blood transfusion, which might trigger fewer autoimmune responses than other forms of drug delivery.

The new DARPA contract is geared towards more general research, with work aimed at expediting and streamlining the methods by which scientists sequence and analyze genomes instead of finding specific solutions.

One project Voigt is working on is how to lessen the energy use involved in producing fertilizer. According to the Institute, natural gas involved in manufacturing fertilizer takes up 2 percent of the global energy supply. Voigt wants to change the biological processes involved in turning nitrogen to ammonia.

The Institute is also looking into ways to make existing products from more natural sources, such as developing drugs made from bacteria naturally found in the human body, and fabricating plastics from renewable sources instead of fossil-fuel.