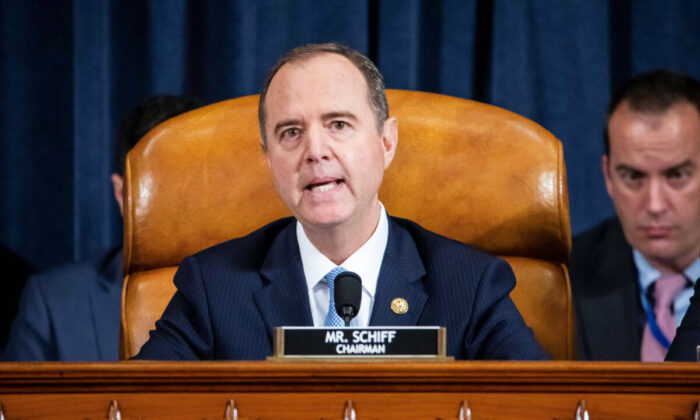 From its inception, Schiff has failed to follow congressional precedent, significantly limited the number of Republicans who were able to question witnesses, maintained all power and control throughout the public portion of the impeachment inquiry by way of resolution, and has prohibited the alleged whistleblower from testifying under oath, despite the president’s right to confront his accuser(s) and fundamental rights to due process.

As Schiff is also a possible fact witness, House Republicans sought to question him under oath, to no avail.

While Republicans have maintained that this impeachment inquiry is nothing more than a politically motivated farce aimed at damaging the president, Schiff has prevented them from questioning witnesses who could seriously damage his narrative and his credibility in the eyes of the American public.

Despite Schiff’s strong-arm tactics to protect his credibility and the “believability” of his narrative, his power isn’t limitless. While Schiff calls the shots when it comes to the procedures that govern the impeachment inquiry, his credibility could be seriously undermined with the pending release of the FISA report, the release of which he can’t control.

By way of reminder, in January 2018, Schiff released a memo in which he vehemently argued that there were no FISA abuses. In the memo, he stated:

“FBI and DOJ officials did not ‘abuse’ the Foreign Intelligence Surveillance Act (FISA) process, omit material information, or subvert this vital tool to spy on the Trump campaign.

“In fact, DOJ and the FBI would have been remiss in their duty to protect the country had they not sought a FISA warrant and repeated renewals to conduct temporary surveillance of Carter Page, someone the FBI assessed to be an agent of the Russian government. DOJ met the rigor, transparency. and evidentiary basis needed to meet FISA’s probable cause requirement, by demonstrating:

• Page’s history with Russian intelligence; and

• [redacted] Page’s suspicious activities in 2016, including in Moscow.”

Throughout the memo, Schiff cites, and analyzes, various pieces of “information” to support his ultimate conclusion.

Despite Schiff’s support of the FISA process and his continued denial that any wrongdoing occurred, a recent report from investigative journalist Sara Carter indicates that Inspector General Michael Horowitz’s much-anticipated report will be released to the public before Thanksgiving, that it will include documents that were declassified by the president, and that it will be quite damning:

“Those documents will contain several classified pages of the Foreign Intelligence Surveillance Act on former Trump campaign advisor Carter Page, exculpatory evidence that was withheld from the Foreign Intelligence Surveillance Court, the so-called ‘Gang of Eight’ folder (which contained exculpatory information), as well as the email chain between FBI investigators in the Russia probe and then-FBI Director James Comey. Those emails also include discussions with lawyers in the DOJ’s national security division. As previously reported, the email chains will contain information that prove the FBI knew prior to obtaining a warrant to spy on Page that former British spy Christopher Steele’s information in his infamous dossier on Trump could not be proven.

“It is also expected to reveal that the FBI knew that Steele was leaking to the media but then used those media reports as separate evidence in their request for a FISA warrant, known as circular intelligence reporting. Circular reporting is when a law enforcement official uses false confirmation by making a piece of information appear to come from multiple independent sources.

Assuming that Horowitz’s report contains these findings, it will paint a picture of (and confirm) the deep bias that permeated some of the nation’s most powerful agencies against the Trump campaign.

It will also entirely discredit Schiff’s argument that no wrongdoing occurred relative to the FISA warrants and will portray him as a deeply partisan member of the House, whose sole goal is to remove the president at any cost (even if it means overlooking clear abuses).

If the pending report contains such findings, and if Schiff comes across as someone who is willing to overlook abuses for the sole purpose of removing the president, the impeachment inquiry also should be viewed with extreme skepticism.

As a matter of fact, Schiff will have a hard time convincing the American public that the current and one-sided impeachment inquiry isn’t yet another attempt to remove the duly elected president on the basis of partisanship and hatred.

Finally, if the report is as damaging as Carter’s reporting suggests, Schiff’s claim that he doesn’t know the identity of the whistleblower could face further scrutiny.

This claim was already difficult to believe, given that members of Schiff’s staff met with the whistleblower before the complaint was filed. As such, it would be hard to believe that Schiff’s staff failed to notify him of what they had learned and who disclosed the information to them.

Moreover, before the start of the Nov. 13 public testimony relative to the impeachment inquiry, Schiff threatened House Republicans with possible ethics violations if the whistleblower was named or mentioned. How could Schiff possibly know if this individual’s name was mentioned if he doesn’t know who the person is? This seems nonsensical.

The release of the FISA report could be a game-changer. If it’s as damaging as Carter suggests, it will not only reveal one of the nation’s biggest political scandals but could also significantly affect the public’s perception of Schiff and the House’s entire impeachment inquiry.