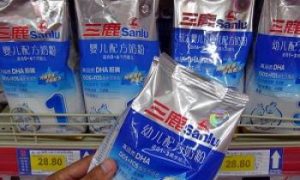 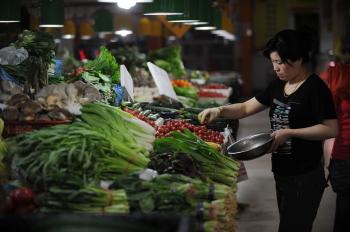 People shop for vegetables in a market in Beijing on May 11, 2011. The communist officials have their own safe food supply. (Peter Parks/AFP/Getty Images)
China

The Party Has Its Own, Safe Food Supply in China

After a series of recent food scares in China—bright green buns on supermarket shelves, bean sprouts tainted with banned food additives—were brought to light in editorials and news articles in the Chinese press, one newspaper went a step further.

Every step in growing the fruits and vegetables for these Party leaders is closely scrutinized to ensure they are clear of pollutants and safe to eat.

Food safety scares in recent years have worried many in China about the food they consume. Scandals involving tainted-milk powder, lean meat powder, and tainted buns have become a daily concern for Chinese people.

Located in Wangjiachang of Liqiao township in Beijing’s Shunyi District, “Beijing Customs Vegetable Farm and Country Club” provides vegetables exclusively to Beijing Customs District’s officials. The farm is on 200 mu (33 acres) of land and is surrounded by a two meter high fence and guarded by five guards.

Only organic fertilizers and biological pesticides are used. The workers at this farm are known to eat freshly picked cucumbers without first washing them.

A state-owned training and test center in Guangdong Province is a forerunner in operating these private food supply farms; they started hiring local villagers to plant vegetables and raise pigs, fish, chickens, and ducks in the center since a decade ago, the report said.

A Beijing resident told New Tang Dynasty TV about a similar farm in Hebei for Beijing’s Education Department. “They have everything there, fish, vegetables, all cared for by their own people. The department’s officials share the produce, and that’s what they eat.”

A Southern Weekly reporter called the 103 ‘green product’ suppliers for the 2008 Beijing Olympics and found many still maintain a close relationship with government agencies.

Such private food supply farms are all over China. High-quality foods are sold in bulk to provincial governments, food bureaus, agriculture bureaus, and other departments. Average consumers don’t enjoy the quality of food in this private supply chain, Southern Weekly’s report said.

Nearly 90 percent of food sold in China contains additives, of which there are 2,000 types. An average adult consumes 80 to 90 different types of additives per day, a May 9 People’s Daily report said.

The food safety scandal reported by the Chinese media and Internet is only the tip of the iceberg, says Zhou Qing, a Chinese writer living in Germany.

In 2004 Zhou authored a book on the topic, What Kind of God: A Survey of the Current Safety of China's Food. In a Radio Free Asia article he said Chinese do not trust any food manufacturers because the regime deliberately hides the truth and suppresses media from reporting negative news.

Zhang’s claim that food in China is safe has been under attack by Chinese netizens. Many Chinese are also indignant about the “private food supply farms” reported by Southern Weekly.

The State Council might ban reports on tainted food in the wake of the 90 year anniversary of the Chinese Communist Party, Southern Metropolitan reported on May 7. The article about “low-key farming” on Southern Weekly has already been taken down, although it can still be found in the web cache.

"Everything we eat contains toxic substances. A neighbor told me that his daycare-age daughter is developing breasts! They do not even know which food caused it,” a Shanghai resident told Sound of Hope Radio, “You can hardly prevent it. Vegetables are simply loaded with chemical fertilizer and pesticide.”

This “private food supply will bring terrible consequences,” writes Qing Yuan, an Epoch Times contributor. “Those government departments with the power and authority in their hands will disregard food safety even more. They won’t care about other’s health as long as they have their special supply.”