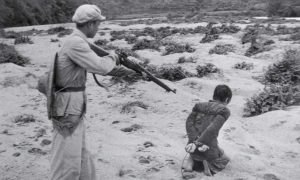 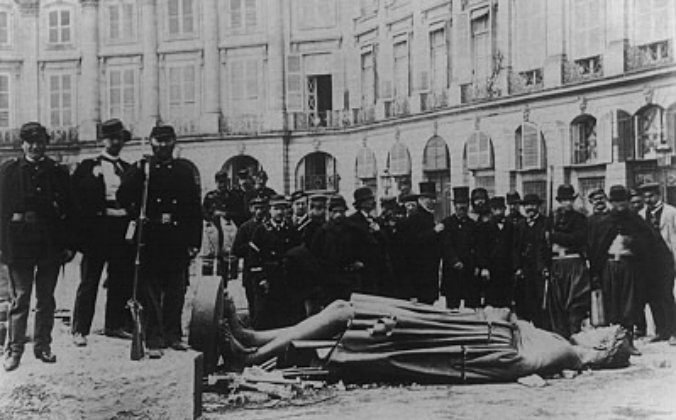 The toppled column of Napoleon I at the Place Vendôme during the Paris Commune in 1871. (Andre Adolphe Eugene Disderi/public domain)
The Dead End of Communism

The Paris Commune: When the Specter Came to Earth

Like a funnel cloud longing to touch Earth and become a tornado, the specter of Communism was up in the air, with no Earthly home, haunting Europe in early 1871.

The Paris Commune, a bloody insurrection covering 73 days, became Communism’s first Earthly home, like a tornado touching down. The specter was embodied.

“There is a specter haunting Europe,” wrote Karl Marx in “The Communist Manifesto.” In Paris, this specter gained the foothold from which it could wreak its own lethal tornado of destruction and killing for decades to come.

The Paris Commune was shortly endorsed by Marx as the first proletariat revolution, or “dictatorship of the proletariat.”  Its influence as a model echoed all the way to Lenin and Mao, who studied and learned lessons from it.

Europe in the mid-19th Century bubbled with numerous theories of revolution, including socialism and communism.

The Paris Commune was put together in the wake of the Franco-Prussian War and the end of the Second Empire in France. The National Guard had defended Paris during the war, and it did not accept the regular army taking over at the war’s conclusion. The regular army and the recently elected parliamentary government temporarily withdrew to Versailles on March 18, 1871.

B. Benham, in his 1898 book “The Proletarian Revolt: A History of the Paris Commune of 1871,” explains the connection: “But the tens of thousands of National Guards, made up exclusively of workingmen, under the control of an elected body composed almost entirely of workingmen, stamp the uprising with an indubitably proletarian character.”

“Its significance can hardly be overestimated,” Benham wrote. “It was a skirmish of the forces which will meet in greater actions on broader fields. Its history is that of the greatest revolt of ‘free’ workers the world has ever seen.”

The uprising brought together various socialist and revolutionary groups. The actors and their operations fit the description of the “dictatorship of the proletariat” that Marx espoused, and this enabled the specter to come to Earth.

Its leader, Louis Auguste Blanqui, was a French socialist. His previous attempt at revolution, the 1839 Blanquist revolt, had also been joined by the League of the Just which in 1847 merged with the Communist Correspondence Committee to form the Communist League, and it was there that Marx and Engels wrote “The Communist Manifesto.”

The Paris Commune dissolved during the “Bloody Week” of May 21–28, 1871, when the regular army returned and took control of the city. By all accounts, the regular army killed more people than the Communards and their sympathizers did.

But the Communards showed themselves to be scoundrels in their widespread destruction of life and property, before and during the return of the regular army.

They set fire to public buildings and private houses. Countless columns of smoke made the air hard to breathe at times during Bloody Week. Contemporary accounts said that one-fourth of Paris may have been destroyed thus.

They destroyed treasures of art. Vast amounts of cultural legacy, collected in Paris and representing the best of humanity over hundreds of years, were smashed or went up in smoke. Paintings, sculptures, parchments, architecture—irretrievably gone.

In cold blood, they shot dozens of innocent hostages, including priests and the Archbishop.

They did away with suspected spies by such methods as binding them hand and feet and tossing them into the Seine River.

All these destructive and inglorious acts also provided a model for future proletarian uprisings.

Inspiring the Russians and Chinese

Vladimir Lenin admired the Paris Commune so much that he danced in the snow in Moscow on the day that the Bolshevik government exceeded the time that the Commune lasted. He wrote, “We are only dwarves perched on the shoulders of those giants.” His tomb was decorated with a red flag from the Commune.

Summarizing opinions in the Soviet Union when he wrote a history of the Commune in 1930, Edward S. Mason said, “Not only is the Commune of Paris a glorious and inspiring episode in the history of the proletarian movement, not only did it supply socialist revolutionaries with invaluable lessons in revolutionary tactics, but it laid down the foundation of a form of proletarian government which was to receive its full development in communist Russia.”

The death of millions of innocent people under Lenin and his successors remain a testament to this lineage.

Mao Zedong also studied the Paris Commune, and some aspects of the Cultural Revolution (1966-76) were inspired by the Communards.

Communists today still view the Paris Commune as the ancestor, the first embodiment of communist theory. Its lineage and its destructive legacy extend to today. Almost 150 years after coming to Earth, the destructive tornado is still spinning viciously.