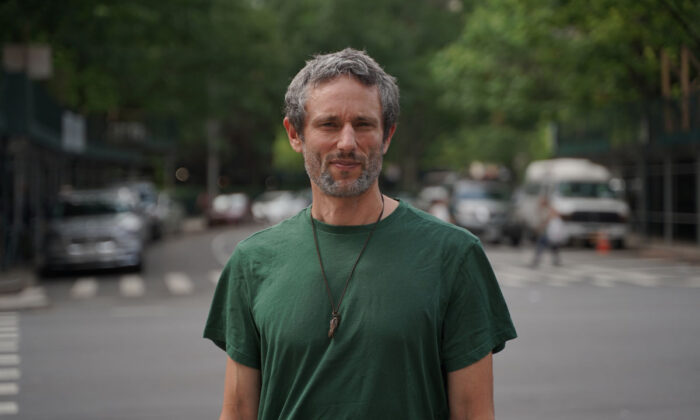 The Paradox of Control: Safety Mania, Mob Dynamics, and Dehumanization in the Age of COVID

“If you don’t conform to the irrationality, to the hysteria,” says writer Charles Eisenstein, “then you become the enemy, the traitors, the nonconformists, and the taboo-breakers.”

In a recent episode of “American Thought Leaders,” host Jan Jekielek and Charles Eisenstein discuss ideas from “The Coronation,” his new collection of essays exploring the ideologies and dynamics of safety and social control, especially in the age of COVID.

Jan Jekielek: Your first essay in “The Coronation” is about the Zika virus, where you write, “All the ideological machinery was already in place for the transition that began in 2020 to a fully medicalized society.” What are you saying here?

Charles Eisenstein: I wrote “Zika and the Mentality of Control” in 2017. It turned out that the Zika virus wasn’t scary enough for them to actually implement a lot of policies. My son was going to a school camp, and everyone was going to sleep in a tent and be outdoors for two days. They canceled it because New England had two cases of Zika virus. That was more important to authorities than having children get to know each other and being out in nature.

This is the mentality where everything is subjugated to the litmus test of “Is it safe or not? Could you get sick or not?” and how you should live your life to minimize that risk. That whole mentality was already well developed by 2017. The conditions for COVID hysteria are not new.

If you hold safety as being of paramount importance, then you can use it to justify anything, and that’s exactly what we saw. That was the justification for the suspension of civil liberties. But there’s no clause in the Bill of Rights that says, “Except if the authorities declare an emergency, Congress shall make no law abridging freedom of speech and freedom of religion.”

So, to protect our safety it’s OK to suspend civil liberties, to keep children indoors, and close off the playgrounds. It’s OK to prohibit handshakes and hugs, choirs and Little League games, and everything else defined as nonessential. I’m not saying that safety is unimportant, and I’m happy to prolong my life. But it’s for a reason; it’s so that I can live. It’s not so I can exist in a bubble in some half-alive hell until I die.

That mythology of well-being and security says that human destiny lies in a program of control. This is the belief that humans are the only source of intelligence in the universe, which gives us the duty to impose order onto the world. And this pathology as expressed in the COVID hysteria indicates we are on the brink of a deep revolution.

Mr. Jekielek: The authorities say, “Wear masks, get vaccinated, and you’re a good person.” This propaganda stems from what you’re describing.

Mr. Eisenstein: “If I wear a mask, then I’ll be safe” conforms to the ideology of control. And here’s another thing: When something disrupts our illusion of control, people panic, and they want something done. The authorities come under pressure. So they do what is familiar to them and to the public, which is to issue mandates and go to war against something.

A lot of unconscious psychosocial forces are at work here. It’s totally irrational, but people do irrational things all the time. And if you don’t conform to the irrationality, to the hysteria, then you become the enemy, the traitors, the nonconformists, and the taboo-breakers.

You could say the same thing about witch hunts. This is the pattern of unifying violence, when everybody turns on a sacrificial subclass of victims or scapegoats. We see this dynamic even today. I noticed it in grade school. Did you have a weird kid in your class?

Mr. Eisenstein: In our class, he was Kent, and Kent had cooties. Who decided Kent had cooties? Who knows? But nobody wanted to associate with him, because if you did, then you’d be the weird kid, too. A couple of loudmouths gleefully accused Kent of being weird, and then there were the enthusiastic who joined in the name-calling. Then there was the silent majority, the kids who said, “I don’t necessarily think Kent is weird, but if everyone says so, they must be right.” And then there were the silent doubters who felt sorry for Kent. This was me. I didn’t speak up for him, because then I would be ostracized as well. So I kept silent. And our silence creates an illusion of unanimity.

This is a powerful, psychological disposition that fascists and totalitarians exploit to control society.

Mr. Jekielek: One thing that has stunned me over the past three-odd years is the realization of how important the idea of belonging is to humans.

Mr. Eisenstein: Part of the crisis of our civilization is a crisis of belonging. It comes from our dissociation from community, place, and nature. Ordinarily, we get a sense of identity from our relationships. Today, these relationships have shrunk to the nuclear family and to the superficial relationships of the workplace or the suburban neighborhood. For most of our lives, we’re immersed in a sea of strangers. We don’t have a sense of belonging like an indigenous villager, or a medieval peasant, or even someone living in a small town in the 19th century.

Then, you were surrounded by a matrix of stories that gave you the sense of being at home in the world. Today, we don’t have that, so we’re vulnerable to substitutes like membership in an internet opinion tribe or a political ideology. Everybody is dividing the world into good guys and bad guys. Now, I’m not saying that there’s no such thing as a virus, or that viruses can’t make people sick. But when that is the exclusive lens, this good-versus-evil lens, we end up fighting an endless war, which includes totalitarian control over society.

Mr. Jekielek: This passage from one of your essays really jumped out at me: “What makes you crazy is to be an agent of your own gaslighting. It starts with outward conformity, when you say and do things that contradict your truth. You might have good reasons to uphold the pretense: to avoid shaming and ostracism, to be accepted, to keep your job. But unless you can hold a place of truth within you that is inviolate, the show soon becomes real. You forget the boundary between true and false, and the bandits breach the walls. They run amok as you retreat to the inner sanctuary, the seat of the soul. Finally, they usurp that too, and you become a fugitive in your own castle. That is what I mean by insanity.”

Mr. Eisenstein: Yes, you become a fugitive in your own castle, dodging all the negative voices that tell you you’re crazy, naive, and irresponsible. They’re overwhelming, and they’ve taken over the throne, but you’re still in the castle skulking around, searching for something to save you from banishment. I definitely went through some dark periods like that, but I finally listened to my inner revulsion and began writing. The masks always bothered me more than the vaccines. The dehumanization was just so dystopian. I didn’t want my children living in a world where masking became normalized.

That’s what pushed me over the edge to say things I knew would get me in trouble. That’s when I published “Mob Morality and the Unvaxxed.”

Mr. Eisenstein: Basically, it says the unvaccinated are fast becoming the new dehumanized subclass associated with contagion, the enemy that must be controlled or removed from society. They’re not fully deserving of life and liberty because they’re putting us all at risk.

We have to look at this pattern, because who knows what the next invocation toward mob violence will be? Who are we going to dehumanize next?

Mr. Jekielek: You mention dehumanization just now. I believe you see this as something that humans do, which is a real foundational problem.

Mr. Eisenstein: It’s one of the deepest lies of the human condition. Anytime you dehumanize somebody, you’re not in truth. The truth about human beings is that they are divine souls and children of God, however you want to articulate it. They are a full sacred consciousness looking from different eyes.

COVID showed us what we were choosing. It said, “If you continue on this path, here is what society will look like.” The surveillance, the censorship, the lockdowns, and the mandates were a preview of a future where we subscribe to the story of control. We were shown that so that we could choose, intentionally and consciously. We have a very clear choice right now.