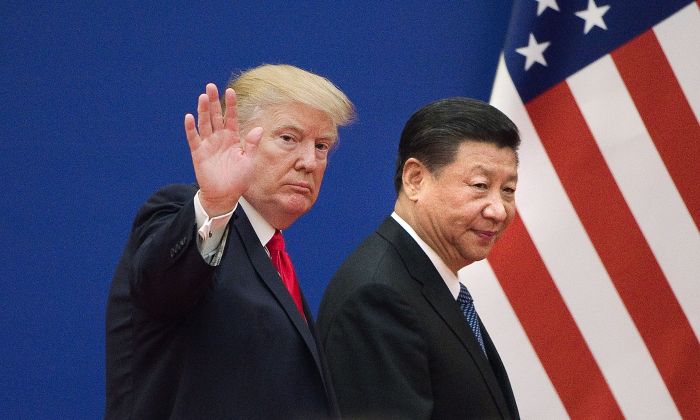 Contrary to the ridiculous propaganda flowing out of Beijing, China’s claim of being the new leader of the world rings hollow. The Chinese Communist Party’s (CCP’s) self-congratulatory messages about how it has “successfully” led China through the pandemic that it, in fact, released upon the world, is hardly a mandate for global leadership.

In fact, given the volume of trade and supply chains fleeing China, the real story is just how brittle and fragile China’s economy truly is without the American market to support it.

But until Donald Trump took office, that wasn’t a commonly understood fact.

For many policymakers and observers, the inevitability of China’s rise to replace the United States as the leader of the world seemed a foregone conclusion. It was also viewed as a positive eventuality by none other than one of the first architects of America’s China policy, former U.S. Secretary of State Henry Kissinger, who said in 2007:

It was just such a fatalist and self-defeating (or was it simply globalist?) thinking that initiated the decline of American power in the postwar world. Kissinger’s disastrous policy in Vietnam of “graduated response” led to the United States’ humiliating defeat and the expansion of communist regimes and wars in Asia, Africa, and Latin America for the next decade or so.

Fast forward to 2007, Kissinger tells the United States and its allies that we must accept the fact of a world led by China. Ten years later, in 2017, when Trump took office, there was no question that China had become a formidable adversary of the United States throughout much of the world.

How the West Built China

However, it was clear to Trump that China had been allowed to become a global challenger. Its rise was a result of the West providing continuous and large-scale investment and technology to it for two decades. In other words, the United States did for China what China couldn’t do for itself in the prior three decades of CCP rule.

What’s more, China is a rather belligerent beneficiary. From 2000 to 2016, during its rise to global dominance, Beijing demonstrated a total disregard for the established, i.e. American, rules governing international trade and finance.

Of course, prior U.S. administrations knew of China’s cheating, but mostly regarded it as just the “cost of doing business.” The promised—but elusive—access to its billion-plus domestic market and cheap labor proved too enticing to pass up.

Nary a whimper of protest was heard from either political party. That is, until Donald Trump became president.

Unlike the globalists in both Democrat and Republican parties—and they are many—Trump saw the fragility of China’s economy well before the rest of the world. He also understood that China’s reliance on slave labor and adversarial trade policies were some of the main reasons why U.S. manufacturers found it almost impossible to compete with China.

Finally, Trump understood that single-sourcing of critical supplies from an adversary is unwise, to put it politely. And that if nothing changed, China’s rise as the world leader at the expense of the United States would indeed be inevitable.

Ultimately, Trump saw China for the threat that it truly is to the U.S.-led postwar world order.

But his warnings about the dangers and risks of relying on China went largely misunderstood. Instead, critics blamed Trump with destroying the postwar world order.

That charge, of course, begs one very simple question:

How is preventing the rise of a totalitarian state—one that violates rules governing international trade, seeks to destroy the economies of the West, and remake the world in its totalitarian image—a threat to the American-led, democratic, capitalist world order?

It isn’t, of course. Trump is trying to preserve the postwar world order as much as possible. That includes a much more diversified global economy, where supply chains are not concentrated in one nation, and an adversarial one at that.

It was no secret, either, that the United States’ dependence on China came at the expense of U.S. jobs and the country’s manufacturing base. Still, Trump’s characterization of China as a mortal economic threat to the very trading partners that did so much to bring modernity to it was viewed with dismay and derision.

Globalism, after all, was what the world needed to move forward, right?

Not so much anymore.

The most wicked and devastating pandemic to plague the earth in more than a century tells the real story about the CCP. Despite Beijing’s despicable propaganda, the world now knows of the CCP leadership’s responsibility for infecting the entire world with its deadly CCP virus, commonly known as the novel coronavirus. It’s clear that Beijing waited two months to acknowledge the outbreak as it continued to spread throughout the rest of the world.

The community of nations finally sees the true nature of the CCP and the contempt it has for human life.

U.S. politicians see it, too, and are beginning to act. Sen. Josh Hawley (R-Mo.) has proposed legislation to bring back supply chains from China that are critical to Americans’ well-being. The proposal includes medical supply chains for key medical equipment and supplies, and low-cost federal loans to expedite that process within this calendar year.

As U.S. Secretary of State Mike Pompeo stated after a recent G-7 meeting, “The Chinese Communist Party poses a substantial threat to our health and way of life, as the Wuhan virus outbreak clearly has demonstrated.

“The CCP also threatens to undermine the free and open order that has underpinned our mutual prosperity and safety in the G-7 countries.”

And, as Shadi Hamid, a senior fellow at the Brookings Institute, wrote for The Atlantic, “[The] relationship with China cannot and should not go back to normal.”

From day one of his presidency, Trump’s goal was to break the disastrous trade relationship between the United States and China. His trade war revealed the brittle weakness of China as an economic power. But the CCP’s viral pandemic has revealed the Party leadership’s moral bankruptcy to the world.