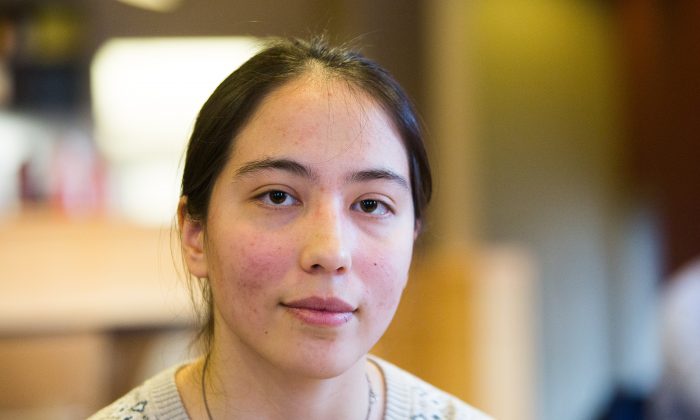 The Other 6 Percent of St. Louis (+Video)

After Ferguson Commission is announced, one woman questions why more diverse voices aren't being heard
By Genevieve Belmaker

ST. LOUIS, Mo.—When Corinne Char, a 22-year-old lifelong St. Louis resident, had the chance to help speak up against racism after the shooting of Michael Brown in Ferguson, Mo., she took it. Perhaps it’s because she has a deep sense of right and wrong from her family’s history of her immigrant grandparents being forced to jettison their Chinese heritage to fit into American society. Or perhaps it’s the moral compass that she, like many other teachers, actively cultivates when it comes to the sensitive issue of race relations in America.

Whatever it was, she joined the activists, protesters, and community members who started to call for a closer look at how nonwhites in America are so often left on the sidelines. Ironically, it was her own experience as an Asian-American that spurred involvement in the Ferguson protests that started in August.

“I left a job in August after I was told some very racist things by the administration,” said Char this week in St. Louis.

As an eighth-grade math teacher at the St. Louis charter school Grand Center Arts Academy, she was shocked when a motivational speaker employed a fake Asian accent and stereotypes as part of his program.

“So many of the kids came up to us [teachers] after the assembly and asked, ‘So racism is okay if it’s about Asians?'” Char recalled. As stunned and confused as her students, she reached out to the administration to complain. The school administration’s response came as a complete shock.

“I was told that discussing racism would hurt our community.”

Char resigned not long after because of what she described as a lack of contrition from school administrators, and joined local groups working to change the status quo. She took part in prayer vigils, trained as a de-escalator with Veterans for Peace, and marched with other activists in the Ferguson October movement.

But it wasn’t until a discussion with the Women’s Caucus that she realized that some people felt that it was a black and white issue—literally.

“I was told by someone at the Women’s Caucus that they didn’t trust the Asian businesses and Asian beauty salons in general because they were talking about them behind their back,” she said. “I didn’t really say anything then; but at the same time it was like, ‘seriously’?”

That leaves the “other” 6 percent in both areas, though, including Native Americans, Hispanic, and Asian.

For Char, she feels that that 6 percent has little to no voice when resolving racial issues on the table, as it is now.

“I think St. Louis is just so racially tense between black and white that everyone else just gets forgotten,” she said, adding that she’s even been told that other races in discussions about equality only serve to “muddy the waters.”

Char particularly takes issue with the newly announced Ferguson Commission, which Gov. Jay Nixon appointed earlier this week. It has been broadly charged with tackling the delicate issues surrounding racism in St. Louis to find solutions and improvements in the system.

As one of the more than 300 people who applied to serve on the commission, Char is correct in pointing out that in the end its racial makeup almost fully reflects what she calls the city’s “binary” perspective on race. All 16 commission members are either black or white. It includes Christian pastors, deacons, and reverends; business leaders; law enforcement officials; and educators. There are no Jews or Muslims. There are no Bosnians, though the city is home to 70,000 of them. In fact, it is the largest population of Bosnians anywhere in the world outside of Bosnia and Herzegovina.

To Char, those voices matter in the future of the city just as much as black and white voices, and they should be heard.

“I feel like I’ve been fighting for justice, but not just black justice but equality for everybody.”