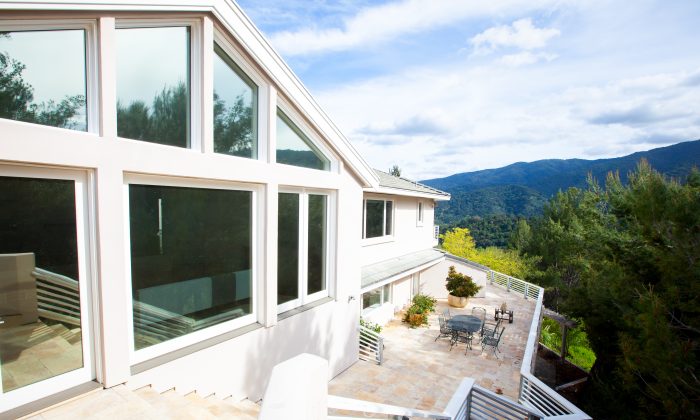 ‘The Original Wozniak Estate’: A Crossroads of Postmodern Design and Imagination

It’s clear Steve Wozniak’s time at his former home on 300 Santa Rosa Drive in Los Gatos was filled with lots of kids, love, and most of all—FUN. This is evidenced in the many fantastical design elements woven into the architecture of the home that make it a wonderland of exploration for children and adults alike.

Although the home’s postmodern aesthetic, designed by Ashford Associates designers Avi Agasi and Amnon Levy, with its museum-quality walls and juxtaposition of sharp lines and asymmetric curvature creates a sense of drifting through a painting or sculpture, underneath the dramatic facade hides a world of mermaids, cave dwellers, and hidden passages.

The adults are not left out of the fun either. Having undergone a major renovation in 2006, modern luxuries like a European chef’s kitchen, stained-glass skylight, blown-glass lamps, updated bathrooms with modern bowl sinks, and a stunning wraparound balcony traversing the entire 7,500-square-foot, 6-bedroom, 8-bath home were added. Hand-finished stucco, Australian Limewash paint, and a concrete roof are also new to the home.

Entering the home for the first time, I am greeted by the soothing sound of flowing water from outside. A waterfall empties into a koi pond over limestone caves created for Mr. Wozniak by the San Francisco Academy of Sciences. Deep inside, one discovers dinosaur fossils, gemstones, stalactites, and stalagmites, along with an entertainment center and lighting system for those nights when watching Netflix on the couch just isn’t enough.

Light dances around the rooms through skylights and sweeping windows like a prism in the morning sun. Past the family room, I discover a small door. With trepidation I open it, and to my amazement, I’m at the bottom of the Rabbit Hole! It’s a carpeted maze of sharp slopes and tight corners filled with stars representing the Milky Way, illuminated by a small skylight.

I climb up the narrow ladder to discover I’ve entered a small loft, and my only escape is a fireman’s ladder that unfortunately, I’m too old, too stiff, and too scared to slide down. I find out from Barbara Sharif, of Arthur Sharif & Associates, that the house is filled with hidden passages and observation windows kids can peek out of to watch adults when they entertain. Genius.

The last little surprise greets me in one of the bedrooms. It’s Princess Ariel from Disney’s “The Little Mermaid” and her crustacean friends in their underwater kingdom! Mrs. Sharif explains that the mural, covering two entire walls, was commissioned by Steve Wozniak and painted by a Disney artist. [Note to self: contact Disney next time I need a wall painted.]

As I step out onto the balcony and walk the length of the home, stopping to enjoy the views of the breathtaking Santa Cruz Mountains, I realize why Mr. Wozniak chose this site for his home base, and why he stayed for nearly two decades. Though the home has passed through a few different owners who have left their own mark since the time of Steve Wozniak and his family, little touches of the Apple titan can still be found if you care to look.