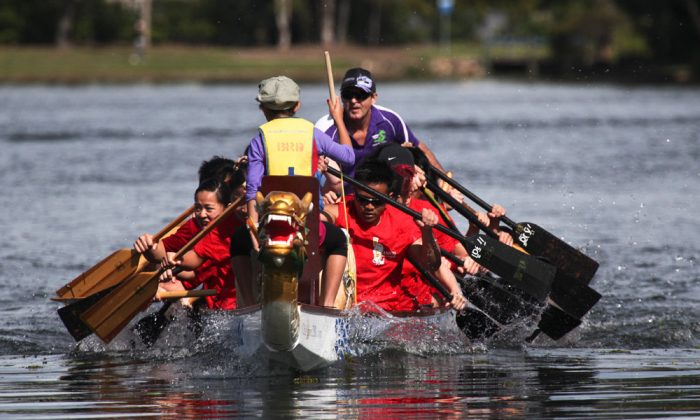 The Origin of the Dragon Boat Festival, 端午節

The Dragon Boat festival, or Duān Wǔ Jié, celebrated on the fifth day of the fifth month of the Chinese lunar calendar, is one of the oldest and most popular traditional Chinese festivals. This year, it falls on June 12.

Qu Yuan (approximately 340–278 B.C.) was a court minister for King Huai of the state of Chǔ (楚). Qu Yuan advocated that his king form an alliance with the other five states against the increasingly dominant power of the state of Qín (秦).

His success incurred the jealousy of fellow ministers, who slandered and defamed him in front of the king. Eventually, Qu Yuan was removed from the court and sent to a remote region in the south, which is today’s Húnán (湖南) Province.

Despite his failed political career, Qu Yuan has been remembered for ages as the first great patriotic poet of China. Written in his days of exile, Qu Yuan’s magnum opus “Lí Sāo” (離騷) (“Encountering Sorrow”) became the first and most important piece of “Chǔ Cí” (楚辭) (“Verses of Chu”), one of the two anthologies of classical Chinese poetry.

“Li Sao” contains 373 verses totaling about 2,490 characters. It is the literary representation of Qu Yuan’s high moral conduct and patriotism. Qu Yuan’s other famous piece is “Jiǔ Gē” (九歌) (“Nine Songs”) and “Tiān Wén” (天文) (“Questions to Heaven”) is also attributed to him.

“Tian Wen” posits 172 questions to Heaven about Chinese mythology and religious beliefs, but the poet does not include answers. “Jiu Ge” actually includes 11 songs representing some shamanistic dramatic practices of the Yangtze River valley.

In 278 B.C., on the fifth day of the fifth month, Qu Yuan wrote his last poem, “Huái Shā” (懷沙), and then took his own life. He waded into the Miluo River (汨羅江), with a rock tied to his body, less than a mile away from the river’s entry into Dongting Lake (洞庭湖).

After news of Qu Yuan’s death spread, the local people of Chu, who admired Qu Yuan greatly, paddled their boats out and raced to save his body. They raced from Miluo River all the way to Dongting Lake.

The people wished to stop the fish from eating Qu Yuan’s body by disturbing the waters with their passage. This is said to be the origin of the yearly dragon boat race.

Very soon, the dragon boat race became an annual tradition in the states of Chu, Wu (吳), and Yue (越). Over the centuries, this festival became popular throughout China. As Chinese people migrated to other countries, this tradition has been adopted in Japan, Vietnam, and even the United Kingdom.

Along with the boat race, people also make a special delicacy named zòngzi (粽子) to mark the festival. Zongzi is made out of sticky rice and eggs wrapped in large leaves and tied up with colorful strings.

It is said that, after Qu Yuan died, the people of Chu started throwing zongzi into the water in order to attract the fish so that they would not eat the poet’s body.

A Chinese medicine doctor also poured a big jar of strong liquor into the water in order to calm the water dragon so that it would not eat Qu Yuan’s body.

The tradition of making zongzi lasts up to today and has developed into many varieties. Along with rice and eggs, ingredients may include red bean paste, meat, and dates. Nowadays, people in Korea, Japan, and southeastern Asian countries enjoy making zongzi, as well.

Traditional Chinese culture puts much emphasis on maintaining the integrity of the body when a person dies. This is vividly depicted vividly in this legend that surrounds the Dragon Boat Festival.