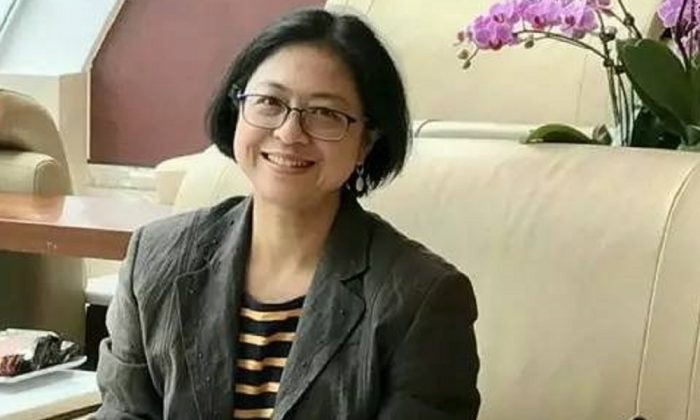 The 49-year-old academic Lu Li-an is the sole delegate to the Chinese Communist Party’s 19th Party Congress to have been born in Taiwan. (Shanghai Taiwanese Compatriots Association)
Chinese Regime

The logic is irrefutable: The Chinese regime claims Taiwan is its province, and all China’s provinces must be represented at the 19th National Party Congress currently taking place in Beijing. Producing representatives from Taiwan turns out not to be so easy.

Since the Chinese regime has no real sovereign control over the people of Taiwan, the regime has to search for Taiwanese individuals willing to step up to the plate to represent “Taiwan Province.”

And among the China’s almost 1.4 billion people the regime found just one: Ms. Lu Li-an, a 49-year-old academic who was born in the City of Kaohsiung.

Taiwan’s Liberty Times confirmed the heavy mainland cast to the “Taiwan Province” delegation. According to the Times, officials at the Party Congress were very cagey about the identity of the ten members of the delegation and did not allow outside media to interview them during a scheduled press conference.

Lu reportedly met and married a Chinese man while studying abroad in the United Kingdom during the 1990s. She eventually relocated back to China in 1997 through the Chinese government’s “special arrangement” and started teaching at Fudan University in Shanghai.

The news that a native-born Taiwanese became a delegate at the Party Congress attracted considerable media attention in Taiwan.

In response to public concern that Lu’s participation in the Chinese regime as a Communist Party delegate would void her Taiwanese citizenship, Taiwan’s National Immigration Agency confirmed on Wednesday that Lu had already obtained the citizenship of the People’s Republic of China some years ago. Per Taiwan’s immigration law, her Taiwanese “residency” had been revoked.

In an interview with Taiwan’s Storm Media on Friday, Lu sounded like a CCP official. She said she had observed during her teaching career how the Chinese regime is “making China strong” and eventually decided to join the Chinese Communist Party in 2015. It is unknown how often Lu travels back to visit Taiwan nowadays, if at all.

Lu also called upon the young Taiwanese to come to the mainland to benefit from the “huge market” there. “You can let the whole world see you if you come to the mainland [China],” said Lu. “The two sides of the [Taiwan] Strait can harness the benefits of peaceful coexistence together.”

That Lu is the only native-born Taiwanese in the 2,287-strong delegation of the 19th Party Congress raises the question of why the Chinese regime failed in its effort to recruit more “real” Taiwanese to participate in its most important propaganda event. At any given time there are an estimated 1-2 million Taiwanese doing business or traveling in mainland China.

Although Taiwanese law permits dual citizenship with other countries, it voids the citizenship of any Taiwanese who acquires “residency”—what is normally called citizenship—in the People’s Republic of China. It also prohibits any Taiwanese citizen from holding office in the Chinese government or military, or to be an official of the Chinese Communist Party.