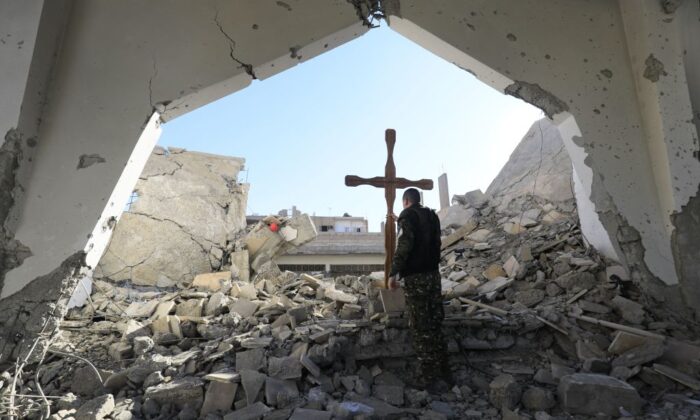 A member of the Syrian Arab-Kurdish forces places a cross in the rubble ahead of a Christmas celebration at the heavily-damaged Armenian Catholic Church of the Martyrs in the city centre of the eastern Syrian city of Raqa on Dec. 26, 2017. (Delil Souleiman/AFP via Getty Images)
Viewpoints

The Ongoing War on Arab Christians and Western Complicity

Christianity faces the possibility of disappearing in the Middle East, where its roots go back to the death of Jesus Christ. A century ago, Christians comprised 20 percent of the region’s population. Today, they are less than four percent. Moreover, as noted by Barbara Kay, a Canadian columnist, “we are seeing mass exoduses of Christians from Middle Eastern countries in which they are indigenous inhabitants.”

However, the persecution of Christians in the Middle East rarely gets much attention in the Western media. The late Jonathan Sacks, who was an English rabbi, said this to the House of Lords in 2019: “The persecution of Christians throughout much of the Middle East and elsewhere is one of the crimes against humanity of our time, and I’m appalled at the lack of protest it has evoked.”

Saudi Arabia defines itself as an Islamic State, and Saudis are required by law to be Muslim. Christians living in the country cannot worship in public, and they are not entitled to hold meetings even in the privacy of their own homes. Christians caught practising their faith in public are most likely to be beheaded. An official eighth-grade textbook used in Saudi public schools teaches children that “the Apes are the people of the Sabbath, the Jews; and the Swine are the infidels of the communion of Jesus, the Christians.”

Despite all this severe persecution, Saudi Arabia is America’s largest foreign military customer and second-largest trade partner. Particularly under the administration of President Donald Trump, a very strong military and economic relationship was cemented between the two countries.

Relations between the two nations were so strong during the Trump administration that the Saudi newspaper, Al-Youm, ran headlines like: “U.S.-Saudi Relations are Fortified Politically and Strategically.”

There is also now evidence that the U.S. government under President Barack Obama indirectly aided and abetted extremists in their quest to expand the scope of Islamic fundamentalism during the so-called “Arab Spring,” which was a series of anti-government protests and uprisings that spread across much of the Middle East (and North Africa) in the early 2010s. During this period, the U.S. government and its agents did more than any fundamentalist group “to permanently enshrine Sharia as the constitutional law of the land throughout the Muslim world.”

In Egypt, the “Arab Spring” ended up empowering extremists to initiate bloody persecution that has led hundreds of thousands of Christian Copts to flee the nation. Egyptian political scholar Samuel Tadros said: “The Copts can only wonder today whether, after 2,000 years, the time has come for them to pack their belongings and leave, as Egypt looks less hospitable to them than ever.”

In Iraq, Christian Assyrians are among the last to pray in Aramaic, the language Jesus spoke. However, since Saddam Hussein’s dictatorship was overthrown by an U.S.-led military coalition, at least two-thirds of the Assyrian population has fled the country due to “intense violence from Islamist extremists and common criminals, both of whom operate with impunity and who specifically target Christians.”

From 2005 to 2008, when some 100,000 American troops were occupying Iraq, the local Christian community experienced some horrific persecution. When 20,000 Christian families were being violently driven from Baghdad in 2006-07, then-U.S. Secretary of State Condoleezza Rice contended that the American government could not take effective action to protect them from being murdered and kidnapped because it did not want American policy to be seen as “sectarian.”

One laudable exception to the persecution of Arab Christians is Syria, a country where they can trace their origins to the beginnings of the Christian faith. There, the embattled autocratic ruler of Syria, Bashir Al-Assad, has always protected Christians and his Alawite Muslim sect against foreign-backed religious extremists.

I was visiting from Egypt, where I lived at the time and where Copts were typically seen but not heard, so I was amazed to hear the ringing of church bells and to find a Syriac Easter liturgy broadcasting over loudspeakers to overflow congregants in the city streets!

Therefore, the support of Syrian Christians to the Assad regime is entirely justifiable. It is primarily due to a fear that the ongoing uprising against this secular government could end in just another Islamist takeover that would threaten the very existence of the nation’s multi-religious society.

However, since June 2012, the U.S. government has run a covert operation in aid of military groups fighting President Assad’s army forces. Some of these groups are Sunni warriors affiliated with al-Qaeda and other extremist groups that are waging jihad against that secular government.

Religious freedom, of course, is the bedrock on which the United States was founded. Why is it then that Washington has been so indifferent, sometimes even complicit, on all these egregious human rights violations in the Middle East?

The answer lies, at least in part, with the strong economic ties between these Western elites and the Saudi theocratic rulers. As author Paul Marshall points out, “Because Saudi Arabia supplies one-quarter of the world’s oil, the United States and other governments have been reluctant to press it harder to end its demonization and incitement to violence against Christians both within the kingdom and throughout the Islamic world. This reluctance exists despite the financial and other support for terrorism emanating from the kingdom—terrorism based on doctrines of religious hatred and jihad.”

The west has a lot to answer for the appalling atrocities against Christians in the Middle East. Since they have somehow contributed to many human rights violations in the region, especially against the Arab Christians, they deserve our strongest possible condemnation.