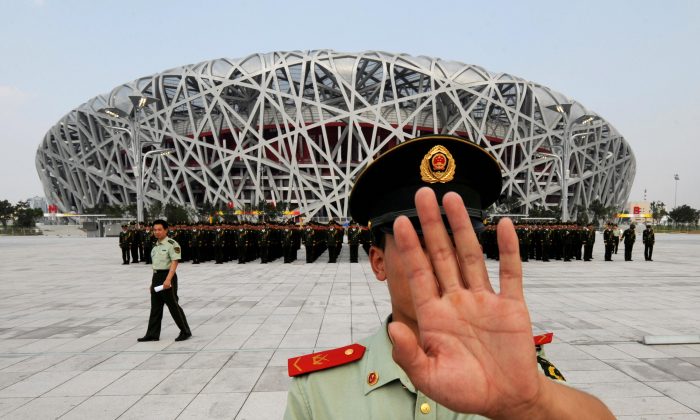 A Chinese paramilitary policeman tries to block photos being taken of a military parade rehearsal, outside the Olympic Stadium in Beijing on July 21. (Mark Ralston/AFP/Getty Images)
China

The future of the Olympics is here. Democratic countries are wary of hosting them due to the monetary weight on taxpayers, and authoritarian nations jump on them for the opportunity to boost their images abroad and their legitimacy at home.

When the votes were cast on the host cities of the 2022 Winter Olympics, only two out of the original eight remained: Beijing and Almaty, Kazakhstan. The decision was close, but Beijing won 44 to 40.

As was expected, one by one, the cities and regions in democratic countries—Stockholm, Krakow, Oslo, and Graubünden in Switzerland—withdrew their bids, leading to Beijing being the only city in history ever chosen to hold both a Summer Games and a Winter Games.

Although China is faced with the same global economic woes as the rest of the world, Gordon Chang, author of “The Coming Collapse of China,” said the Chinese regime’s reason for wanting the Olympics is simple, “Beijing craves legitimization, like all authoritarian regimes do.”

“Why else would they be willing to spend billions of dollars on something that nobody else wants?” Chang said, in a phone interview.

Lack of public support seemed to be the kicker for some cities deciding against hosting the Olympics. When Boston withdrew its bid from the 2024 Summer Games, U.S. Olympic Committee CEO Scott Blackmun wrote in a July 27 statement that they were unable to “get a majority of the citizens of Boston” to support hosting the games.

For a free nation, the spectacle of the Olympics is a liability that involves spending tax dollars on a global event that brings little return and decades of debt.

Boston Mayor Martin Walsh put it more plainly. “I cannot commit to putting the taxpayers at risk,” he said, according to NPR, adding, “No benefit is so great that it is worth handing over the financial future of our city.”

For a free nation, the spectacle of the Olympics is a liability that involves spending tax dollars on a global event that brings little return and decades of debt, along with harsh commentary from the press, an outcry from taxpayers, and disdain from voters at the polls.

As a result of these problems, it’s becoming less likely for the Olympics to be held in countries where taxpayers have a say in the way money is spent, according to Cheng Xiaonong, one-time aide to former Chinese Communist Party (CCP) head Zhao Ziyang and CEO of the Center for Modern China Studies, based in Princeton, New Jersey.

“Fewer and fewer democratic countries will be interested in hosting the Olympic Games,” Cheng said, in a phone interview. He added that moving forward, the International Olympics Committee will likely be forced to “accept dictatorial countries.”

It’s not that China was chosen because it was one of the best. … It was selected because it’s the best of the worst.
— Cheng Xiaonong, CEO, Center for Modern China Studies

“It’s not that China was chosen because it was one of the best,” he said. “It was selected because it’s the best of the worst.”

The Chinese regime’s interest is to replicate the effect of the 2008 Beijing Olympics, Cheng said. The CCP isn’t just trying to legitimize its rule. It is also trying to reinforce the perception of its rise as a global power.

“When the CCP advocates its success around the world,” he said, “it also pushes its patriotism and nationalism, and China’s younger generations are easily mobilized around that.”

Cheng added, however, that with its bid for the Winter Olympics, the CCP is playing with fire.

“China’s younger generations care more about money than they do about the CCP’s image of a rising star,” Cheng said, noting that the same thing applies to older generations whose patriotism is closely tied to their pensions.

The stability of the CCP’s rule is based in “performance legitimacy,” he said, where the people are happy as long as they’re making money.

“The Chinese economy is falling into a real recession—much worse than what the West thinks,” Cheng said, adding, “As the CCP organizes its Olympic Winter Games, China’s economy is already falling into great trouble.”

When 2022 rolls around, he said, “even the rich Chinese government may lack money.”

These games are extremely expensive to put on, and they have only a momentary effect and in the long term cities lose so much money on this.
— Gordon Chang, author

Cost is likely to be a serious factor. Chang said, “These games are extremely expensive to put on, and they have only a momentary effect and in the long term cities lose so much money on this.”

“I can’t remember a time when there were only two countries bidding for the games,” he said, noting, “By now it’s become very clear that countries lose money on this.”

It took Montreal 30 years to pay off its $1.5 billion deficit for the 1976 Olympics. It had to implement a special tobacco tax to make up for the $990 million loss.

So far, the Chinese regime is planning to spend $3.9 billion, but history has likewise shown it’s rare for a city hosting the Olympics to stay within its budget.

NPR reported that every Olympic Games since 1960 has gone above its budget by an average of 179 percent. They cite Oxford economists Bent Flyvbjerg and Allison Stewart.

If Russia’s experience with hosting the Olympics in 2014 says anything, Beijing could be getting much more than it bargained for. The Olympics cost Russia $51 billion, which was far beyond the $12 billion budget it set after winning the bid in 2007.

Beijing is also expected to build some serious infrastructure in time for the games. Since it doesn’t have the needed snowfall, organizers will have to artificially create the ice and snow, and will hold some events in Zhangjiakou. To bring contestants and the audience to Zhangjiakou, Beijing will build a 90-mile high-speed railway.

A Game of Perception

Kazakhstan was forthcoming about its interests in hosting the games. Kazakhstan Prime Minister Karim Massimov said, according to ABC, that the Olympics could place Kazakhstan on the map.

“Twenty-five years ago we were part of the Soviet Union. We had a different image,” he said. “We want to change the image. We want the international audience to understand better what we are doing and where we heading in the future.”

The Chinese regime, on the other hand, has been much less forthcoming. Instead, it has merely increased the volume of its official mouthpieces. Its state-run media have been doing their expected rounds, and some of its overseas projects have joined in as well.

In a press release about the ABC 7 television series “Discover Beijing: A Modern City with an Imperial Past,” Cimagine Media Group announced the next episode stating in a press release that it “captures the changes and growth that have taken place in Beijing in recent years and now prepares this city to again host a mega sporting event.”

Back home, however, the CCP is failing to find the same enthusiasm it received for the 2008 Beijing Olympics. Most of the celebrations were held in the Bird’s Nest stadium at an event with about 500 cherry-picked participants.

“All of those events where there was cheering arranged,” Chang said. “There was no joy like in 2001 like when Beijing won the rights to host the 2008 Summer Olympics.”

Chang said, however, that the real question is where the CCP will be by the time the games start—at a time when the Chinese economy is rapidly slowing and the Communist Party is “tearing itself apart.”

“I don’t think they’re going to be around in 2022,” he said, adding that when the time rolls around, the International Olympics Committee “may find there is no China to host the event.”