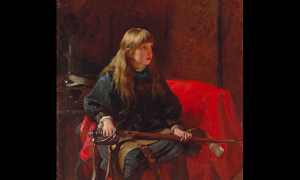 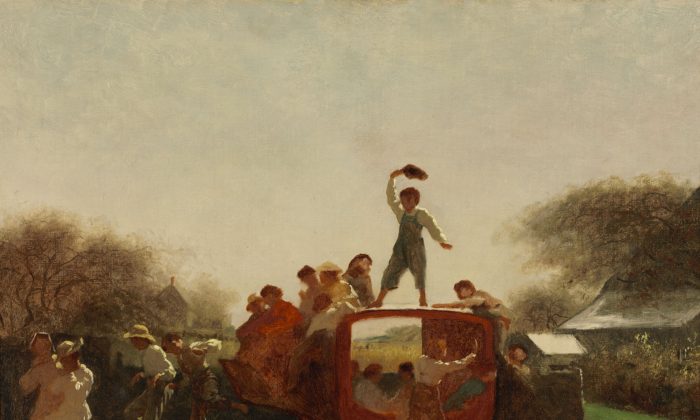 The painter Eastman Johnson’s (1824-1906) evolution of style can be traced back to his early career as an art student traveling around Europe.

He studied abroad at the Düsseldorf Academy and then worked in The Hague, where he began producing genre scenes in a traditional Dutch style.  Before returning to America, he stayed two months in Paris, where he worked briefly with many French academic painters.  After returning to America, Johnson established his reputation with a series of genre paintings of local subjects.

Over the course of his productive career, Johnson developed a status as an accomplished painter of, not only individual and group portraits, but also urban scenes and landscapes. His paintings have great color and value, making them very luminous.  His subjects range from farm scenes and country house interiors to rural genre paintings. The Dutch influence extends into many of his other works as well.

This painting is an oil study for one of Johnson’s most famous images, “The Old Stage Coach” (1871), which is currently on display at the Milwaukee Art Museum.

Johnson uses many themes throughout his work; the theme of youth was viewed in the post-Civil War years as a fitting metaphor for the nation.  The nation was undergoing “Reconstruction” and the energy level was that of a young child.

The community of children working together suggested that the future would be bright.  The stagecoach’s faded name—“Mayflower”—recalled America’s lost innocence and pre-industrial history.  Many in the art section of the Centennial Exhibition enjoyed the finished painting; the fair encouraged a vision of development while looking back upon the colonial past with nostalgia.

The much-celebrated Old Stagecoach was mostly staged in his studio and its composition carefully planned.  The stagecoach itself originated as an abandoned coach that he encountered and sketched while hiking in the Catskills (Carbone, 1999).  The children were painted from local children recruited from near his Nantucket Studio.  Despite this artifice, the painting was celebrated as wholesome, natural, and rural.

One is immediately attracted to the light in the painting.  It is a small painting, which lends itself to the gem-like quality of it.  Another attraction of the work is the loose quality of the sketch, rather than the tightness of a finished work.

The sense of spontaneity in the sketch would be hard to surpass.  As a painter myself, I tend to like sketches more than the finished piece in my own work and in other work.  It’s also easy to fall in love with the way that the children move and almost dance around the old stagecoach.   It’s very difficult to capture the momentary, feeling of the everyday; just looking around and enjoying the moment is a rare and enjoyable part of being aware of the present.

I was not familiar with many of Johnson’s works, but it reminds me a lot of a more-well known painter, Winslow Homer; it is especially reminiscent of Homer’s painting, “”Snap the Whip”” (currently on display at the Metropolitan Museum of art in the American Paintings area).

This makes sense because both painters were influenced by post-civil war thoughts.  The themes of genre paintings changed over the years as worldly events brought social turbulence.

For example, before the Civil War, historians tell us that paintings had focused on people involved in acts of unity. The war engendered paintings in which the subjects appear to be acting alone—thinking their own thoughts—even though doing so in concert with others.  “”Snap the Whip”” depicts a group of boys whose attention is so concentrated on their game, it is as if they are acting independently.  It is a beautiful little painting with a ton of power.

Johnson’s work is very well thought out and captures a specific moment in time.  His work used the principles of Dutch Genre painting to create beautiful and lively scenes of American life.  A stop at the Met’s Dutch painting collection would help to gain on a perspective on Johnson’s work.  He used this study to produce an extremely successful painting that was current with the emotion of the nation.  It is another great example of the beauty of the artistic process.

Eric Alexander Santoli is a graduate of the Pennsylvania Academy of the Fine Arts and a current Art History major at the University of Pennsylvania. https://www.facebook.com/EricAlexanderSantoliFineArt