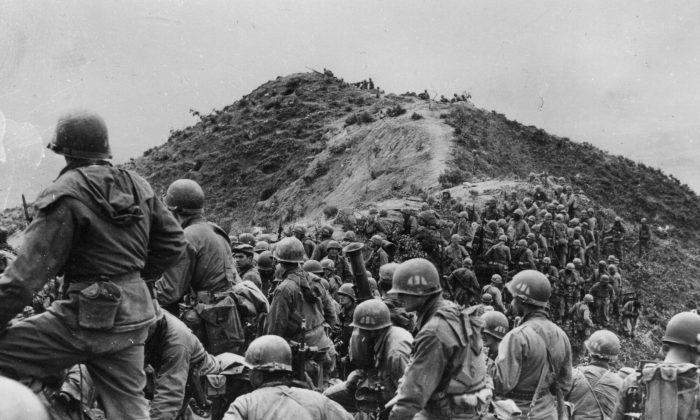 Men of the 187th U.S. Regimental Combat Team prepare to take a ridge position somewhere in Korea on May 3, 1951. (Keystone/Getty Images)
Viewpoints

Recently, the Chronicle of Higher Education published a commentary that opened with the following statement:

“In recent years, several countries across the world have been overtaken by a certain kind of far-right nationalism; the list includes Russia, Hungary, Poland, India, Turkey, and the United States.”

Note the verb “overtaken.” It’s not that forms of nationalism have surfaced here and there in public life in the United States, or that they’ve become a significant force in political affairs. No, they’ve taken over.

When I read that, I didn’t bother to weigh it against the facts. I thought of something else.

Every few years, the U.S. Department of Education administers tests to primary and secondary students in different subject areas of the National Assessment of Educational Progress, the so-called “Nation’s Report Card.”

Here is one question on the exam given to 12th-graders in 2010 in the field of U.S. History:

“During the Korean War, United Nations forces made up largely of troops from the United States and South Korea fought against troops from North Korea and a) the Soviet Union, b) Japan, c) China, d) Vietnam.”

This should’ve been an easy question. Even if you don’t know about the Korean War, Japan and Vietnam are out as long as the test-taker has any knowledge of World War II and the Vietnam War. And any teaching units on the Cold War that students had learned during their history classes would certainly have highlighted the Korean War if the Soviet Union were involved.

And yet, only 22 percent answered correctly, “c) China.” It was a number that makes an educator want to tear his hair out. But the result was not an anomaly. Every time 12th-graders take the U.S. History test, more than half of them score “below basic,” the lowest possible grade. In 2010, only 12 percent of high school students reached “proficiency” and a microscopic 1 percent reached “advanced.”

College coursework doesn’t fix that ignorance, either. Not only are history enrollments in college down significantly, but the history knowledge students receive before and during college tends to play up American guilt, not American exceptionalism. This is not a formula for long-term knowledge.

Most Americans want to feel good about their country, to find past leaders heroic and actions triumphant, while acknowledging, to be sure, periodic failings and villainy. Who wants to embrace Washington, Jefferson, Adams, and Franklin if they’re just a bunch of privileged white men out for themselves?

The result is unsurprising: Young Americans enter college, workplaces, and voting booths ignorant of the Founding, the Civil War, and the Berlin Wall.

I can hear the progressive, the libertarian, and the millennial laughing at that alarm. “What’s the big deal?” they say. “History is just one subject, and if I ever need a historical fact, I can always Google it.”

That’s the 21st-century version of a 100-year-old presumption: the idea that individuals can form judgments all by themselves, without the guidance of history and tradition.

One of the great innovators of the modern world, Henry Ford, famously summed it up: “What do we care about what they did 500 or 1,000 years ago? I don’t know whether Napoleon did or did not try to get across there, and I don’t care. It means nothing to me. History is more or less bunk. It’s tradition. We don’t want tradition. We want to live in the present, and the only history that is worth a tinker’s dam is the history we make today.”

The past, you see, is just information, irrelevant and obsolete.

Which brings us back to the Chronicle commentary. The only way you can consider current trends in American politics a revival of nationalist fascism, as the author does, is to have no historical imagination of past episodes.

He defines fascism as “any ultranationalism … in which the nation is represented by an authoritarian leader who claims to speak for the people.” The predictable reference to President Donald Trump follows, and just afterward, “what occurred in Germany.”

Only historical ignorance could draw such a comparison.

One would think that scenes from Nuremberg 1938 were being reenacted on Pennsylvania Avenue, instead of, as I write, one California woman’s hazy 36-year-old allegation of aggressive groping by a then 17-year-old hijacking one of the cardinal duties of the U.S. Senate.

History isn’t just data, what happened and when and by whom. It is the ground for sober judgment. Knowledge of U.S. and world history curbs such wild talk as that of fascism here at home. The confident modern man who believes his own experience is enough to shore up his assessment of the present is a know-nothing.

Even modernists grow old, and witness the knowledge they acquired and believed was true and good grow old, and in the eyes of the next generation appear not better than the wisdom of the dead that the moderns themselves had renounced and ignored.

Mark Bauerlein is professor of English at Emory University and senior editor at First Things Magazine.