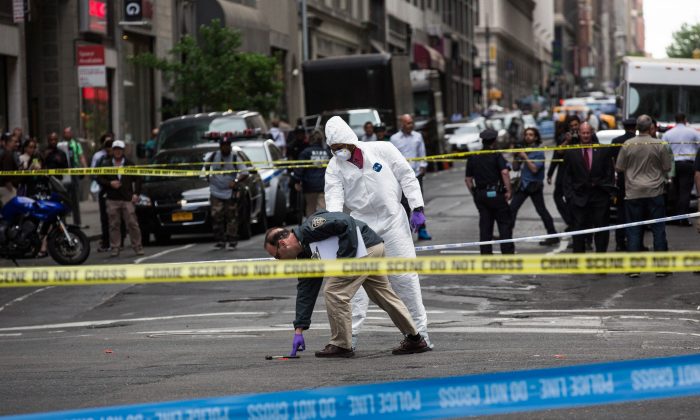 Crime scene investigators inspect a hammer used in an attack on a police officer in New York City on May 13, 2015. (Andrew Burton/Getty Images)
New York

The NYPD Unit That Speaks for the Dead

NEW YORK—There are a few ways a person can go when, on a daily basis, they witness horrific deaths and violence. Some people may start developing PTSD and suffer from nightmares and lasting trauma. Others may put up an emotional wall and grow cold and callous. But others go another way, still—they start to develop a deeper sense of empathy, and an appreciation for the value of human life.

Detective Chris Florio has investigated close to 600 homicides during his 15 years with the NYPD’s Crime Scene Unit, which is tasked with gathering and documenting evidence from scenes of serious crimes. He said many officers try to stay detached, as a way of coping with the work, noting that “we’re in there for hours and sometimes days dealing with things that most people don’t even want to look at for a few seconds.” But every officer has cases that stick with them.

I think of these kids from time to time, and it reminds me of why I do what I do.
— Detective Chris Florio, Crime Scene Unit, NYPD

Several years ago, a man in Brooklyn got angry at his girlfriend and used a kitchen knife to murder her and her two children. One of the children was 4 years old and the other was 2 years old. Florio was assigned to investigate that case. He said, “A large kitchen knife can do a lot of damage to any person, but to a small child … it was something that I’ll never forget.

“I think of these kids from time to time,” he said, “and it reminds me of why I do what I do.”

He said, “As a crime scene investigator, we speak for the dead.”

Crimes aren’t solved by any one person in the NYPD. It’s a collaborative effort, with different teams specializing in different roles.

Florio is one of just 55 investigators with the Crime Scene Unit, tasked with investigating every single murder, every sexual assault, and every officer-involved shooting in a city of 8.4 million people.

The unit dispatches detectives to all five boroughs. Their job isn’t to make arrests. Their job is to make sure every fingerprint is found, every DNA hit is recorded, every gunshot is analyzed, and every tool or piece of evidence involved in a serious crime is found and documented.

Crimes aren’t solved by any one person in the NYPD.

“Everything that we do is to try to find justice for the person who was ultimately victimized by a horribly horrific crime,” Florio said. “We do that in hopes that we can solve the case and help prosecute the suspect so it can never happen again.”

With the case of the woman and her children who were murdered several years ago, the man who killed them had spent close to 24 hours trying to destroy evidence. But cases like this aren’t uncommon, Florio said. His unit is there to fill in the gaps, “when there are no witnesses, when the subject who committed the crime is no longer on the scene, when there’s no video tape, and all you have is forensics.”

When Florio and other officers with his unit arrived on the scene, they spent more than 24 hours searching for and documenting every piece of evidence that remained. “To put it lightly, I say that the scene spoke to me, because you could see what those kids had to have gone through,” he said. “It was heartbreaking. Devastating.”

In the end, the man was found guilty, and evidence gathered by Florio and others in his unit played a key role in putting the murderer behind bars. Florio said there’s satisfaction in knowing you put everything you had into investigating a case and that the work you did means the suspect who carried out the crime won’t be able to harm people again.

“Once you’re the victim of something like a murder, there’s nobody speaking for you in terms of telling the police what happened. We’re there to figure out what happened,” Florio said.

While the work is often emotionally challenging, Florio said: “It’s a daily reminder of how fleeting life is, and you never know when yours is coming to an end. You make sure to just appreciate life a little bit more. … I think we all hug our kids a little bit tighter and make the time we spend with our family and friends count a little bit more.”

Detective Anthony Ribustello, also with the Crime Scene Unit, opens a large device with a rotating-laser camera in its center. He then opens a laptop and shows the types of images the machine can generate. What’s displayed by the Leica PS-20 laser scanner is a complete, 3-D image of a crime scene, which he’s then able to navigate through in any direction, as if he were on the scene.

The idea behind this technology is to make a record of the crime scene. “It’s frozen in time forever,” Ribustello said, noting that if a crime takes place in a park that 10 years later gets replaced with an apartment building, the unit will have a record of the scene they can use to either revisit evidence from an older crime, or to show a jury during trial.

While the new technology is flashy and impressive, many of the old techniques are still in use.

“Some of our cases do go on for years,” Ribustello said, noting they even have a Cold Case Squad, which specializes in investigating cold cases.

While the new technology is flashy and impressive, many of the old-fashioned techniques in crime scene investigations are still in use. These pull from similar techniques used as far back as the first American crime lab, built in Los Angeles in 1924. Detectives then—as they do now—would take photographs of evidence, use various tools to find bullet trajectories, and document everything from the direction of blood spatters to imprints of tire tracks.

Captain Michael King, commanding officer of the unit, has his officers wheel a large door riddled with different-sized bullet holes into a room in the unit’s headquarters in Queens. One of the officers places a rod with a laser pointer at the end through one of the bullet holes, which King then sprays with fog-in-a-can so the beam of the laser can be seen as a straight, red line through the mist.

King said investigators will do similar investigations on every bullet hole in a crime scene, then use a string to interconnect the holes. He said this helps detectives find and trace each bullet and also helps them pinpoint where the shots came from.

In an on-the-scene investigation, if a suspect fired a gun in an apartment, the bullet may go through a wall and into the neighbor’s couch. King said the investigator will then need to ask to investigate the second apartment as well, and so on, until every bullet is traced and found. In addition to this, detectives need to document the scene using photography, sketching, and 3-D scanning with the specialized rotating laser devices.

We can be out there a minimum of 12 hours, maybe 24, sometimes 30 hours on one scene.
— Captain Michael King, Crime Scene Unit, NYPD

When a team of two detectives goes to a crime scene, King said: “They don’t just go out and pick the evidence up. They have to mark it, they have to document it. … When our teams go out on a job, we can be out there a minimum of 12 hours, maybe 24, sometimes 30 hours on one scene, depending on how big it is.”

He noted that even after working an 18-hour shift, it’s not uncommon for a detective to get called into another job that takes another 25 or 30 hours. King himself is on call 24 hours a day, seven days a week. But they’ll work two or three days on a case, he said, with “no complaints.”

The team is also highly trained, and each officer is expected to take ongoing training. King said each week they rotate detectives through refreshers and training programs on new developments. “These skills diminish if not used, so we have them train every day within the unit,” he said.

You have to have a very high level of integrity to be able to work for a crime scene unit.
— Captain Michael King, Crime Scene Unit, NYPD

Officers in the unit are expected to go above and beyond, King said, noting the unit’s inspector “demands that we do 110 percent out there in the field.” The work isn’t taken lightly—and with good reason. Missing one piece of evidence can mean the difference between a murderer going to prison or being released on the streets, where he can do it again. King said when it comes to finding evidence, “you only get one shot. Once that crime scene is closed down and cleaned up, all that evidence is lost to us.”

King said the officers in his unit do this work “without a supervisor standing behind them, and without cutting corners.”

“You have to have a very high level of integrity to be able to work for a crime scene unit, because one of the main criteria here is you have to be able to respect the integrity of the crime scene,” he said. “Anything that is moved or changed can be detrimental to a case.”