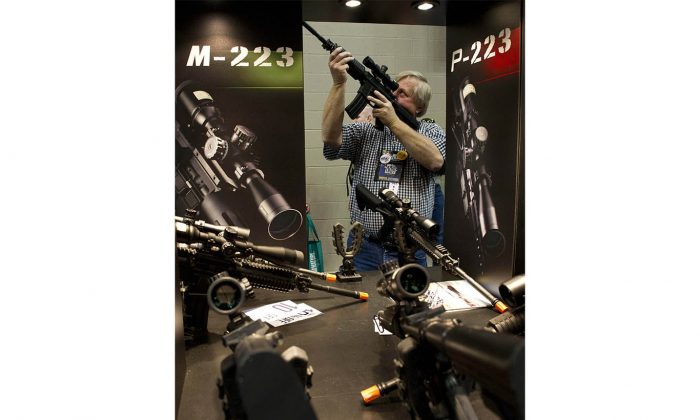 A gun enthusiast checks out a scope at the 143rd NRA Annual Meetings and Exhibits in Indianapolis, Indiana on April 26, 2014. (Karen Bleier/AFP/Getty Images)
Opinion

The NRA’s Accidental Brush With Sanity

Whoa, that was close. The National Rifle Association nearly shot itself in the foot recently with a common-sense editorial it posted online.

The group of rootin’-tootin’, bullet-spittin’, doctrinaire, guns-everywhere extremists finally saw something involving firearms that even it considered too extreme. In Texas (naturally), worshippers of the glorious gun god have taken to shouting out their ideological absolutism in coffee shops, museums, chain restaurants, and other public places by having a dozen or more of their ilk walk in together with shotguns, assault rifles, and other weaponry strapped onto them.

“Any gun, anywhere,” is their message, expressed in an unsubtle, don’t-mess-with-us swagger.

“Scary,” exclaimed the NRA editorial, calling the macho show counterproductive to the cause of gun rights, adding that such peacocking is downright “weird.” That is, of course, a sane response.

But sanity isn’t comfortable turf for gun dogmatists. The NRA soon got hit with a barrage of fire from its own ranks, plus an explosion of rage from gun groups that are—believe it or not—even gunnier than the NRA.

So the big, bad, never-surrender rifle organization quickly threw in the towel. It recanted its momentary lapse into sanity, and cravenly blamed some unnamed lowly staffer for the ideological impurity.

The upshot is you can expect to see newly sanctioned NRA gun strutters parading into cafes near you. But let me ask this: How would those strutters react if a band of African-Americans or Latinos were to stride into one of their cafes, armed to the teeth?

I’m with the president on this one: “There’s no reason,” he said, “why on the street today a citizen should be carrying loaded weapons.”

Oh, that wasn’t Barack Obama. It was Ronald Reagan, in 1967—back when he served as the governor of California.