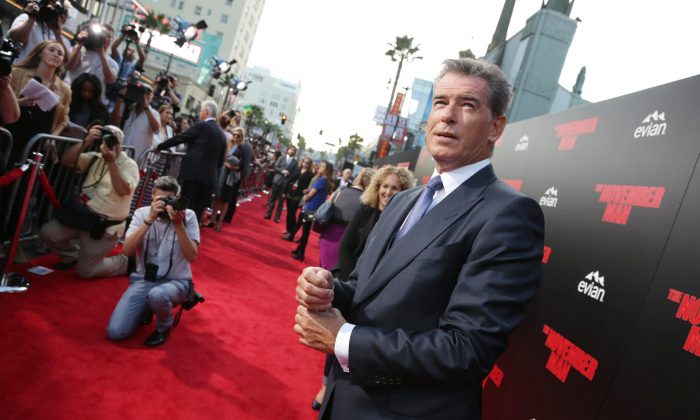 Pierce Brosnan seen at The World Premiere of 'November Man' on Wednesday, Aug. 13, 2014 at the TCL Chinese Theatre in Los Angeles. (Photo by Eric Charbonneau/Invision for Relativity Studios/AP Images)
Entertainment

During a Reddit AMA (Ask Me Anything) session, actor Pierce Brosnan revealed some of his hobbies, likes, and his latest charitable work. He is currently in New York City promoting “The November Man.”

He told his fans he likes pasta, Earl Grey tea, he likes dogs, and he takes his vodka martinis “straight up with a twist.”

While remaining the perfect Irish gentleman that he is, Brosnan was polite, honest, and straightforward.

He also revealed his creative, softer side by saying that the last film that made him cry was Michael Cane’s “Last Love,” and that he paints in his spare time. Brosnan described the relationship between his two dogs as “unquestionably sound and meaningful.”

Even though for some fans he will always remain Agent 007, Brosnan will be appearing in his latest action thriller “The November Man,” as a ruthless former CIA operative who has a run in with his pupil. If Bond and The November Man had a run in, Brosnan says only one of them would walk out alive.

To conclude his AMA, Brosnan said: “Thanks to one and all out there who have supported my career all these years. I am forever grateful to you. I really, sincerely, hope you enjoy The November Man. I shall carry on doing my best to entertain you all. And love life! Be lucky! Do good things.”

Below is the complete session.

Q: have you checked for a button under the gear stick cap?

A: There is no button under the gear stick, no. Thank heavens.

A: With one bullet.

Q: Mr. Brosnan, I think I can speak for an entire generation of people to say thank you as we grew up with you as our Bond, and I think you brought something to the screen that no other Bond was capable of. You had the charm and wit of a dashing playboy, but still had the suave and confident action hero spy moves to go along with it. Every Bond has their strengths, but I think you carried the franchise back into popularity. So my question is what is your favorite Bond movie? Both yours and not yours?

A: My movies would be the GoldenEye, I love that movie, it was the first one out the gate, so to speak. And then Goldfinger, because it was the first James Bond film I saw as a boy, fresh off the plane from Ireland in 1964. Thank you for the compliment.

Q: Mr. Bond, do you feel any remorse in killing 006 (aka Sean Bean) and therefore starting a trend in which he must be killed in nearly every role henceforth? I’ll take my answer off the air. Edit: Clip for reference HERE

Q: what were your thoughts when you read the script for mars attacks? It’s a very whacky movie and you did a hilarious job in it!

A: Well, I love the world of Tim Burton. I just think he’s a unique storyteller and director on the Hollywood stage, or any kind of cinematic stage, come to that. I thought that the idea of turning bubblegum cards about Martians taking over the world, making it into a movie with an ensemble cast, was just a brilliant idea.

Q: Would it really be that bad of a thing to die by Famke Janssen squeezing the life out of you with her legs?

A: Hehe. When that time comes… it would be nice to go with Famke. Love Famke Janssen.

Q: What is your favorite animal?

A: The dog. I just love dogs. I’ve had many dogs in my life, and my dog now, Shiloh, is a rescue dog from Hawaii, and we have another new rescue dog right now, and their companionship is… unquestionably sound and meaningful.

Q: What is the proper way to take a cup of tea?

Q: ‘Mrs. Doubtfire’ is one of the all time great comedies. Could you share a funny or interesting story about working with Robin Williams?

Q: PIERCE! Loved you in Goldeneye, so glad to see you’re back in the spy game for November Man! How do you take your vodka martinis in real life?

A: Straight up with a twist

Q: What’s your favorite place to visit when you’re in Ireland?

A: County Kerry. Brosnan, the Brosnan clan come from Kerry. My old man Tom Brosnan was a kind man. And the Brosnans run deep in that part of the world. It’s one of the most gorgeous parts of Ireland.

Q: Mr. Brosnan, What was it like getting hit in the head with that lime in Mrs. Doubtfire? Robin Williams looks like he had a pretty good arm – how many tries before that direct hit? Are there any other memorable moments from the set with Robin? Also, as a 90’s kid I have to say that you are my James Bond. Thank you for those films!

A: That was take 2 of it you saw in the movie. I thought we were going to be there all day, the first one whizzed by my head, and the second one is what you see in the film. The whole experience was a great joy. Working with Robin everyday, and Sally Field, and Chris Columbus, completely memorable.

Q: You seem to have a lot of running projects right now, are you in your ‘second breath’ life period now?

A: November Man is one of 7 films that I’ve done in the last 2 years, so it’s been a very productive time. And this is Irish dreamtime (my production company’s) our 10th film together, and my producing partner and I have made films like The Matador, The Thomas Crown Affair, and the November Man is a film we are deeply proud of.

Q: Mr. Brosnan, it is an honor to be here today. As a 30-something man, you were the Bond I grew up with, and I’m a big fan of your entire body of work as a result (Bond-bias, I suppose). My favorite film of yours is The Matador. I thought the character of Julian was fantastic, and during many of the scenes, you really seemed to be having fun playing up Julian’s lewd disposition and crippling insecurity (a total 180 from Bond). Since this came just three years after your last 007 outing, I was wondering if it was especially amusing for you to play an international man of mystery who was the opposite of James Bond in almost every regard?

A: Richard Shepherd who wrote & directed the Matador really came bearing gifts. He sent the script to me as a writing sample of his work, because he was hoping to do Thomas Crown too. And I loved his script The Matador so much that we went and made the movie in Mexico City. And Julian is just one of those audacious characters that gives an actor that wonderful kind of opportunity to be an unexpected surprise.

Q: Hey Pierce-last month my wife and I ran into you on our Honeymoon at a hotel in Kauai on the balcony. You were there with your son who just got a haircut and you were gracious enough to take a picture of my wife and I. We never let on that we recognized you because we didn’t want to bother you while you were with your son. Does ever happen? Did you wonder if we recognized you?

A: Well, as seeing as there were only 4 of us standing on the balcony, yes. Yes to both questions. And hope the marriage is going well.

Q: How do you keep your fantastic hair so well quaffed, no matter how disheveled you get it’s always perfect. Also I hold out hope that there is some sort of secret early gathering of all the James Bond actors, can you confirm this? If not can you make this happen and take pictures?!

A: There’s no secret gathering that I know of. And thank you for the compliments about my hair. Just good irish DNA.

Q: Will there be a rematch with Jimmy Fallon playing ‘GoldenEye’?

Q: Mr. Brosnan, welcome! I was wondering what you favorite book is? Thanks so much!

A: Grapes of Wrath.

A: Oh that’s crazy! I love it. This is the first time I’ve seen this piece of artwork. I think it has a rather delightful neanderthal look to it.