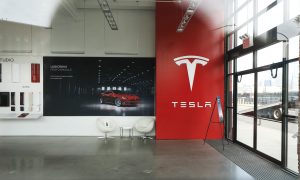 Do What Makes You Happy, Chemistry Nobel Prize Winner Says

The journey of Dr. M. Stanley Whittingham to the Chemistry Nobel Prize
By Shiwen Rong

BINGHAMTON, N.Y.—In the corner of the hall on the second floor of the Innovative Technologies Complex campus at Binghamton University, there’s an office decorated with balloons. A modest way to celebrate Dr. M. Stanley Whittingham’s 2019 Chemistry Nobel Prize.

“So people say, ‘When are you going to retire?'” Whittingham said. And he’ll reply, “I like what I’m doing. I’m gonna keep doing it.”

And his wife, Dr. Georgina Whittingham, who is a professor of foreign languages, says the same.

For more than 30 years, Whittingham has been working at Binghamton University in different positions. Currently, he’s a distinguished professor of Chemistry and Materials Science and Engineering.

It’s a place he loves.

He’s a busy man—even more so since being announced as a key figure in history. What won him the Nobel Prize was that he was the first to develop the lithium battery in the 1970s at Exxon.

He came from a small town—Lincolnshire, England—where his high-school teacher got him excited about chemistry.

“Those days, you could make chemicals, blow things up, and things that you are not allowed to do,” he said with a laugh. “So I got excited about chemistry.”

At the end of his Ph.D., unlike many colleagues who went to North America and Canada, he decided to go to Stanford University.

“I wanted to go somewhere with sunshine,” he said with a laugh. “I’m still British at heart.”

After being there for two months, he was asked to take charge of the material labs of the Department of Defense for the next two years.

“Very successful time, I should say. During those two years, something even more important happened,” Whittingham said. “I met my wife at Stanford.”

“We didn’t waste any time. Within, I think, nine months, we were married.”

After finishing his postdoctoral research in two years, he went to work for Exxon.

“I was hired to work on energy, but not petroleum or chemicals,” he said.

With a keen interest in solar energy and fuel cells, he started researching batteries.

“We wanted to build the next-generation battery,” he said. “The big interest was electronic vehicles because of the gas crisis in the U.S.”

So they started building batteries in test tubes. At that time, they didn’t have any unique environment, advanced machines, or even theories on what they might discover.

“We knew there was something there. We didn’t know how big it would be.”

Whittingham never thought his invention would change the world.

“Even 15 years ago, the phone, you’d need a whole briefcase to carry it. And I think lithium batteries helped all these little devices.”

In the 1980s, John Goodenough, using the foundation that Whittingham laid, made another breakthrough to even more powerful batteries.

With a physicist’s eyes, Goodenough set out to test something that they thought wouldn’t work, Whittingham said.

After decades, these three scientists who changed the world have been recognized with the 2019 Chemistry Nobel Prize.

And it’s all about perseverance.

“You’re going to make mistakes. Don’t worry about that,” Whittingham said. “If you don’t make mistakes, you won’t make the big breakthrough.”

After working for Exxon, Whittingham realized research and academia was something he always wanted to come back to.

Whittingham took up a professorship at Binghamton University in the late ’80s and continued his research on batteries.

“I really wanted to do research, because lots of academia you get 18-year-olds every year coming in. So it keeps you younger,” he said jokingly.

But in the end, he said what matters is that he does what he likes.

“I think you’re successful if you’re happy with what you’re doing,” he said. Winning a prize certainly helps as well, he said with a laugh.

“It’s so motivating that, even at his age, he’s still young,” said Anshika Goel, one of his Ph.D. students. “He comes in the lab, he comes to the office every day on time, no matter how much he’s traveling.”

“He just replied [to] my email at 3 a.m.; he’s still working,” said Yicheng Zhang, another of Whittingham’s Ph.D. students.

Now, 30 years later, he’s still teaching, and it’s his passion that keeps him young at heart.