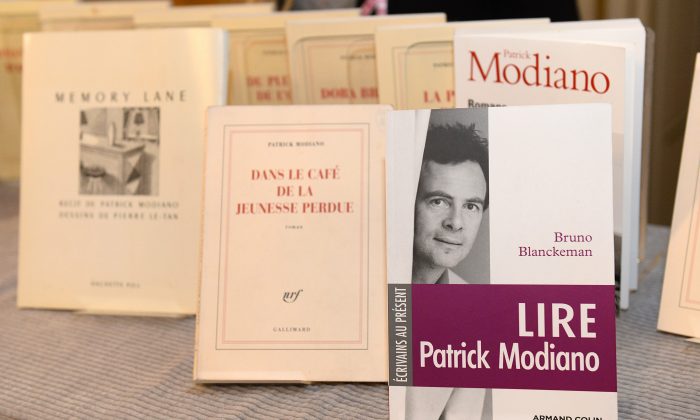 Books of French writer Patrick Modiano, winner of the 2014 Nobel Prize in Literature, are displayed at the Royal Swedish Academy in Stockholm, Sweden on Oct. 9. (Jonathan Nackstrand/AFP/Getty Images)
Life & Tradition

Every October, some unsuspecting writer gets a phone call from the secretary of the Nobel Prize committee. And overnight, an averagely respected author is turned into a global literary celebrity. Quite the fairy tale.

Rushing from radio interview to prime-time TV appearance to public event, this year’s laureate will certainly feel the motors of celebrity firing through his or her life and work. The real writer is invariably pushed to one side as multiple media-generated images pop up in his or her stead. Suddenly the paparazzi are everywhere.

Schooled in the art of fictional self-projection, many bear this with good grace, and some relish it. But ultimately it is celebrity “lite”: people are interested in the stories of success, the tale, rather than the writer as a serious producer of literature. And so the spotlight, like most others, fades.

This is exacerbated in the case of the Nobel because, unlike other literary prizes, it builds on a tradition of rewarding people, not books. For many cultural critics, the focus on the “human interest” is an occupational hazard of the 20th century—the genesis of the celebrity as we know it. This has been amplified by the social media of the 21st century. And so, for many academics, it sits uneasily with the notion of “serious literature.”

But such literary celebrity is not a new thing. Tom Mole has argued that the modern celebrity actually has its genesis, not with the invention of the 20th-century film star, but with the 19th-century cult of the Romantic genius coupled with new print technologies. Literary authors ranked high on the early lists of celebrity. By the mid-19th century, for example, statues of Sir Walter Scott and Lord Byron had sprung up alongside forms of “fan fiction” that are strikingly similar to what we find across social media today.

My own work on the German context supports this. Such public appropriations of writers were facilitated by the industrial revolution as well as the political desire for credible cultural figureheads for the nation. Writers seem to function particularly well as figureheads for shared cultural values: in a recent paper, Jessica Goodman notes that Voltaire and Rousseau were the only two who stayed buried in France’s Pantheon for 11 of the first 15 years of its existence, while a series of political figureheads were ritually interred and disinterred around them.

In his will of 1895, Alfred Nobel stipulated that the prize be awarded to the writer who has produced “the most outstanding work in an ideal direction.” The terminology now seems alien, but the resultant Nobel Prize has proved enduring. This is because it draws massively on both the 19th-century cult of the great author and the 20th-century media of celebrity, TV, and social media. It taps into both worlds.

But the idea of celebrity has overtaken its literary origins and there is no longer such a snug fit. The trouble with the contemporary kind of media-powered celebrity that underpins the Nobel Prize these days is not only that it is so supremely transient. Celebrity also increasingly implies a global reach that marble statues and national edifices alone will not guarantee. It is difficult enough for authors to garner a genuinely wide audience in their own national context, never mind further afield.

The German-language laureates Elfriede Jelinek and Herta Müller were almost completely unknown outside their central European contexts—and were even relatively niche within them—when they won the Nobel in 2004 and 2009 respectively, as was the French writer Jean-Marie Le Clézio in 2008. All three were the subject of a predictable flurry of activity directed at making both their work and their person better known across the globe.

To a degree at least, this has been successful in their native contexts—the Nobel epithet invariably opens doors and swells audiences. But lasting global recognition has been more measured. Their works may now be more readily available in translation, but the world media has since fallen largely silent on all three authors.

This enduring obscurity is nothing to do with the actual literary achievements of any of the recent laureates. It stems from the simple fact that the economic power driving today’s machinery of celebrity does not have a lasting interest in authors. The Nobel Prize unquestionably brings today’s fast-paced celebrity processes into the world of literature, but it does not take the literary celebrity very far out into the world.

From a business point of view, a multinational publisher will tell you that real sales figures are generated not by the literary celebrities on its list, but by the literature written by celebrities: sporting and political biographies that people will pick up on a whim if they are discounted on supermarket shelves.

So whether 2014’s literary prince or princess loves or loathes the limelight, he or she is unlikely to occupy it for very long. Thankfully there’s a real body of work to which this year’s winner can return when his or her own body has ceased to be of immediate media interest. By October 2015 they should be well able to get back to the writing projects that were interrupted by that fateful call.

Rebecca Braun is a senior lecturer at Lancaster University. She receives funding from the UK Arts and Humanities Research Council. This article was originally published in The Conversation.