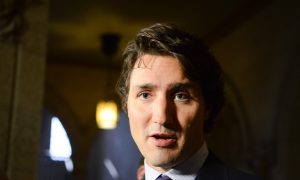 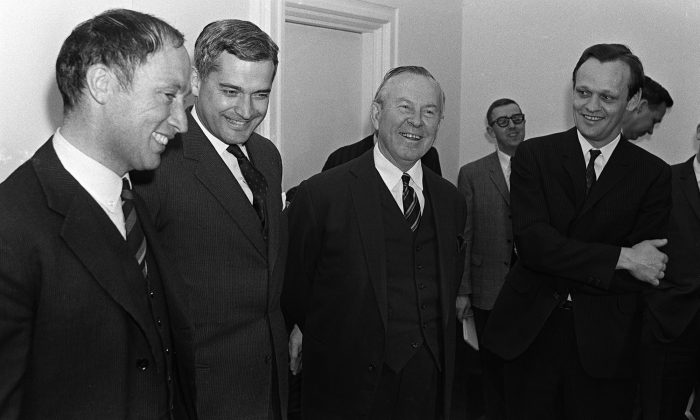 OTTAWA—He was almost a decade away from becoming prime minister but the two RCMP constables on surveillance duty that January night seemed to have no difficulty recognizing Pierre Trudeau, even if they misspelled his name.

The Mounties in the shadows diligently noted he was among eight people who entered a Montreal home in the early evening 60 years ago from Jan. 16.

A four-page RCMP memo says Pierre Elliot Trudeau (the constable who wrote up the report omitted the second ‘t’ in Elliott) arrived at the home of artist Jean Palardy, who lived in an apartment not far from Mount Royal.

The declassified, though still heavily censored, memo provides a glimpse into the workings of the national police force’s attentive Cold War security apparatus.

The RCMP would later keep a watchful eye over Trudeau, who became prime minister in 1968, to protect him from harm. They would also become well-acquainted with his children, including young Justin, who followed in his father’s political footsteps.

But on Jan. 16, 1959, the Mounties secretly took note of the 39-year-old Trudeau’s presence at the gathering of prominent members of the era’s cultural intelligentsia.

The future Liberal leader was then a university lecturer and public intellectual, playing a key role in the influential journal Cite Libre. Just days earlier, a plaster cast had been removed from the leg he’d broken in a skiing accident.

The Canadian Press obtained the RCMP memo, filed under “Revolutionary & Subversive Activities—Montreal, Quebec,” from Library and Archives Canada through the Access to Information Act. It was among hundreds of pages the force’s security branch compiled on another Quebec luminary, Rene Levesque, who would become Trudeau’s prime foil in the national-unity battles to come.

Levesque, a journalist with the French-language CBC at the time, was not there that winter evening, nor is he mentioned in the portions of the memo made public.

However, his CBC colleague Herbert Steinhouse and wife Tobie—a painter whose work now hangs in many fine galleries—were among those who arrived at Palardy’s home, as the Mounties duly recorded, between 5:15 and 6:30 p.m.

Other guests were a poet and legal scholar Frank Scott and wife Marion (misidentified in the RCMP memo as Miriam), who was behind the wheel of their green Meteor sedan. Trudeau had been friendly for more than a decade with Scott, a founding member of the Co-operative Commonwealth Federation, the forerunner of the NDP.

Documentary filmmaker Jim Beveridge and wife Margaret, who met while working at the National Film Board, arrived at the soiree in their grey Chevy station wagon.

The focus of the RCMP’s attention, however, appeared to be Abdelkader Chanderli, the North American chief of the liberation movement fighting for Algerian independence. He had travelled from New York to speak to a meeting of Quebec’s Social Democratic Party.

Chanderli, the Steinhouses, and an unidentified woman left Palardy’s home at 8:30 p.m., climbed into a 1952 Hillman and headed to the speech at the nearby Workmen’s Circle Centre, the RCMP memo says.

Herbert Steinhouse, a senior CBC producer, was keenly interested in strife-torn Algeria, having travelled extensively in North Africa in the late 1940s. Steinhouse’s well-received 1958 novel “Ten Years After,” drew on his knowledge of the troubled French colony.

The author was in great demand at the time among the couple’s circle of acquaintances, Tobie Steinhouse, 93, recalled in an interview. “They were anxious to speak to my husband because his book had just come out, and there was great fuss about the book at the time.”

She crossed paths with Trudeau from time to time during those years and remembers his “wonderful mind” and seemingly boundless curiosity. “He could encompass all kinds of things and all kinds of people.”

The fact Trudeau was mentioned in the RCMP memo—though not the focus of attention—suggests he was a target of security-service interest to some degree, said Steve Hewitt, a senior lecturer at the University of Birmingham and co-author of the recent Just Watch Us, a history of RCMP scrutiny of the women’s movement.

The Mounties viewed social connections as a kind of spiderweb, following strands to see who might warrant further investigation, said Hewitt. “So in this case Trudeau is known to them, he is under surveillance. He doesn’t seem to be the main target, but they certainly were able to identify him without any trouble.”

The RCMP security branch’s widespread surveillance of people and groups suspected of challenging the established order would not become commonly known until two decades later.