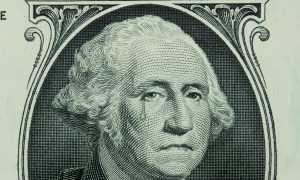 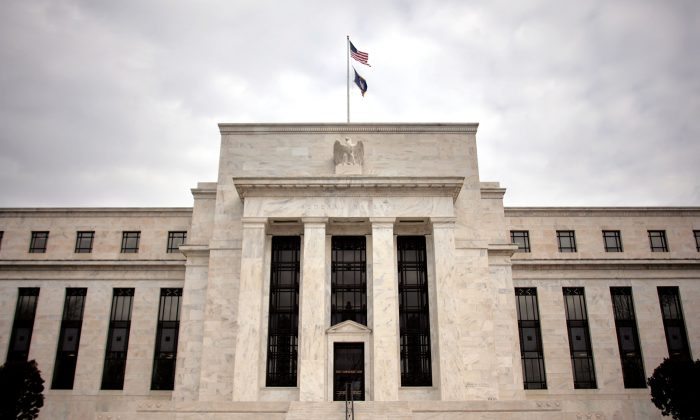 WASHINGTON - JANUARY 22: The Federal Reserve building is seen January 22, 2008 in Washington, DC. The Fed cut its benchmark interest rate by three-quarters of a percentage point after two days of tumult in international markets due to fear of a recession in the United States. (Photo by Chip Somodevilla/Getty Images)
Viewpoints

The Next Wave of Debt Monetization Will Be a Disaster

According to the International Monetary Fund (IMF) and the Institute of International Finance (IIF), global debt has soared to a new record high.

The level of government debt around the world has ballooned since the financial crisis, reaching levels never seen before during peacetime. This has happened in the middle of an unprecedented monetary experiment that injected more than $20 trillion in printed money into the economy and lowered interest rates to the lowest levels seen in history.

The balance sheet of the major central banks rose to levels never seen before, with the Bank of Japan at 100 percent of the country’s GDP, the European Central Bank (ECB) at 40 percent, and the Federal Reserve at 20 percent.

If this monetary experiment has proven anything, it’s that lower rates and higher liquidity aren’t tools to help deleverage debt, but to incentivize it. Furthermore, this dangerous experiment has proven that a policy that was designed as a temporary measure, due to exceptional circumstances, has become the new norm.

The so-called normalization process of raising interest rates lasted only a few months in 2018, only for asset purchases and rate cuts to resume.

Despite the largest fiscal and monetary stimulus in decades, global economic growth is weakening, and the productivity growth of leading economies is close to zero. Money velocity, a measure of economic activity relative to money supply, thus, goes down.

It’s been explained many times why this happens. Low rates and high liquidity are perverse incentives to push the crowding-out of the private sector by government; they also perpetuate overcapacity, due to endless refinancing of nonproductive and obsolete sectors to lower rates, and the number of zombie companies—those that can’t pay their interest expenses with operating profits—rises.

We are witnessing in real-time the process of zombification of the economy and the largest transfer of wealth from savers and productive sectors to the indebted and unproductive.

However, as monetary history has always shown, when central planners face the evidence of low growth, poor productivity, and higher debt, their decision is never to stop the monetary madness but to accelerate it.

That’s why the message that the ECB and IMF are trying to convey is that there’s a savings glut, and the reason why negative rates aren’t working as expected is that economic agents don’t believe rates will stay low for much longer, so they’re holding on to investment and consumption decisions.

This is complete nonsense. With household, corporate, and government debt at still elevated levels and close to pre-crisis highs, the notion of excess savings is ludicrous.

What informs such a misinformed opinion? The often-repeated “there is no inflation” fallacy. If money supply is high and rates are low but inflation doesn’t creep up, then surely there must be a savings glut. False. There’s massive inflation in financial assets and housing, but there’s also a clear rise in inflation in non-replicable goods and services versus replicable ones, which means that the official consumer price indices (CPI) misrepresent the true cost-of-living increase.

That’s the reason why there are demonstrations all over the eurozone against the rising cost of living, while at the same time, the ECB is repeating that there’s no inflation.

When central planners blame economic agents for a nonexistent savings glut and repeat that there’s no inflation when there’s clearly a lot, they also tend to add a conclusion: If households and corporations are unwilling to spend or invest, then the government must do it.

This is, again, a false premise. Households and corporations are spending and investing. There’s no evidence of a lack of capital expenditure, let alone solvent credit demand. The private sector simply isn’t investing and spending as much as governments would want them to, which, among other reasons, is because the private sector does suffer the consequences of taking a higher risk when the evidence of debt saturation is clear to all those who risk their capital.

Unfortunately, the next wave of central bank action will be the full monetization of government excess. The excuse will be the so-called “climate emergency” and “green new deals.” Yet governments don’t have better or more information about the best course of action for energy transition. By artificially picking winners and losers, ignoring the positive forces of competition and creative destruction to deliver faster innovation and progress, governments tend to delay, not accelerate, change.

In any case, it will happen. The ECB, always happy to repeat the mistakes of Japan with an even stronger impetus, is likely to start new programs of debt monetization for green projects and claim it’s a different, radical, and new measure—as if it wasn’t doing so already with the Renewable Energy Directive.

These three reasons—lower inflation, lower tax revenues, and less control—are the reasons why governments will never adopt true changes in the economic growth pattern. And because of these reasons, the massive spending financed with new money creation is likely to be even worse for economic growth.

Not only is it likely to be an even bigger crowding-out of the private sector, but it will also make economies less dynamic, less productive, and more indebted.

There are ways to incentivize change and a green revolution. It’s called competition and creative destruction. None of those are favored by governments, not because they are evil, but because governments have the incentive to maintain the obsolete sectors via subsidies.

If the previous $20 trillion stimuli have delivered more debt, less growth, and rising discontent among the middle class that always pays for government experiments, the next episode, à la Sen. Elizabeth Warren (D-Mass.), will likely be the last step toward full Japanization.

If anything, what are already prudent spending and investment decisions from the private sector are likely to be even more conservative, and the resulting negative productivity growth will mean lower salaries and employment, but higher debt and a larger government footprint in the economy—which is, in reality, the ultimate goal of these massive plans.

The reader may think that this time is different, but it’s not, because the incentives are the same. What I’m completely sure is that, once it fails as well, many will demand even more stimuli to solve the problem.