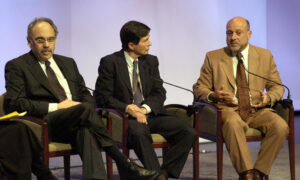 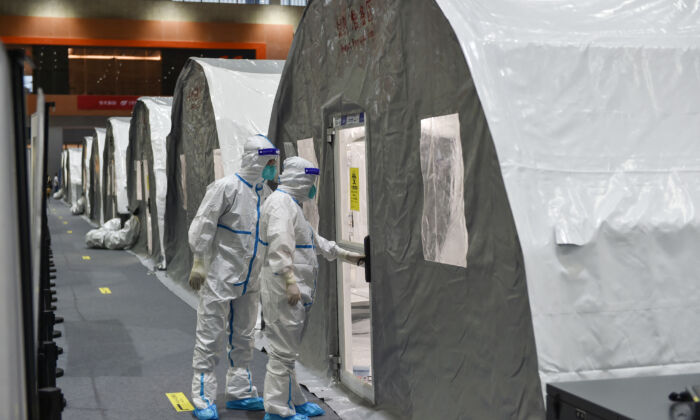 Staff members inspect a unit at a temporary "Fire Eye" laboratory, used for COVID-19 testing, at an exhibition center in Nanjing in China's eastern Jiangsu Province on July 28, 2021. (STR/AFP via Getty Images)
Thinking About China

According to the Global Times, the Chinese regime’s mouthpiece of choice, a flight from Russia is to blame for the most recent outbreak in China. On July 20, after cleaning down the cabin, nine employees at Nanjing’s Lukou International Airport tested positive for the Delta variant.

Fast forward two weeks and the virus has reached six provinces. Hundreds of thousands of people now find themselves in lockdown. The management team at the airport in Nanjing has been heavily criticized by the Chinese Communist Party (CCP). Whether the Russian flight was responsible for transporting the highly transmissible variant to China is up for debate. What cannot be debated, though, is the Chinese regime’s association with deadly pandemics.

As any respectable historian or epidemiologist will tell you, China, historically speaking, has been a hotbed for deadly pandemics. The current coronavirus disease, which almost certainly originated in a lab in Wuhan, wasn’t the first deadly virus to come from China, and it certainly won’t be the last. As foreign policy analyst Vanda Felbab-Brown warns, the next pandemic may very well stem “from improper husbandry, when domestic livestock are not separated from wild animals.”

Where “regulatory deficiencies” exist, the chances of disaster increase.

With China and the next zoonotic pandemic, it’s not a question of if, but when. Take the new mega farm near the city of Nanyang, for example. As the authors at Agriculture.com write, the facility, “roughly 10 times the size of a typical breeding facility in the United States,” will soon “house 84,000 sows and their offspring.” The facility, “by far the largest in the world,” may very well be a breeding ground for the next plague. As virologist Suresh V. Kuchipudi warns, in countries such as China, “disease control, feed supplementation and housing” for domestic animals tend to be poor.

“Cattle, chickens and pigs, which can carry endemic disease, are often in close contact with each other, a variety of nondomestic animals and humans,” he writes.

How well will this mega farm, crammed with 84,000 sows, be run? If history has taught us anything, the answer is “not very well.” After all, the best predictor of future behavior is past behavior.

Factor in the regime’s unwillingness to cooperate with world governments, and you have a recipe for disaster. The CCP, as you are no doubt aware, recently refused to cooperate with an investigation into the origins of COVID-19. If the regime has nothing to hide, why would it refuse? If members of the CCP want the rest of the world to trust the Chinese regime (trust in China is at an all-time low), then, at the very least, be transparent. The refusal to cooperate is, of course, understandable. The regime has plenty to hide.

In March, exactly 12 months after most countries began to close their borders, Adam Minter, a journalist at Bloomberg, wrote a rather interesting piece. He described “scruffy sheep farmers located 120 miles south of Beijing.” These farmers were an interesting bunch, as they regularly doped their sheep “with clenbuterol—a powerful, banned growth enhancer—that can cause serious health problems in humans.”

Minter’s piece came at the same time that the World Health Organization (WHO) began “zeroing in” on China’s farming practices. Now it’s important to note that the WHO has done very little to cover itself in glory. Nevertheless, better late than never, I suppose. However, even if the WHO does “zero in,” it will face considerable obstacles. Minter discusses “just how difficult it is to oversee China’s immense system of small farms—especially when local officials have incentives to ignore obvious problems.”

Chinese farmers, most of whom live an impoverished existence, rely heavily on the aggressive cultivation of crops. Because of this, according to Minter, many “have long resorted to chemical means, including the use (and overuse) of fertilizers and pesticides.” The link between the toxic chemical industry and lethal viruses has been well documented. As researchers at Stanford note, “China is the world’s largest consumer of agricultural chemicals.” The country uses “more than 30 percent of global fertilizers and pesticides,” despite having “only 9 percent of the world’s cropland.”

The abuse of harmful chemicals is problematic on many levels. In the Bloomberg piece, Minter makes yet another valid point: The CCP, eager “to see agricultural production boom,” is more than willing “to look the other way.” Keep quiet. Stay blind. And everything will be OK. Not exactly.

Looking the other way is what got us into this mess in the first place. It’s about time that the CCP, instead of looking “the other way,” took a long, hard look in the mirror. If the regime continues to lie and deceive, then the international community, for obvious reasons, will only become more suspicious. It is time for two things: complete transparency and brutal honesty.