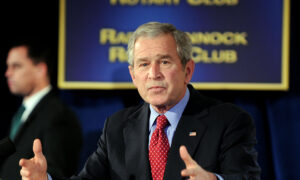 Opinion: Where Are All These ‘Lies’ Coming From?
0
Share Now
TelegramFacebookTweetEmailTellMeWeReddit
Copy Link
Opinion

The New Russian Agenda: How Would Reagan Respond?

Thirty years ago, President Reagan won re-election by a landslide and then led the United States into the final phase of our Cold War victory over the Soviet Union.

If America’s 40th president were alive to see Russia’s current resurgence and its all-too-familiar policy of intimidation against Europe, he would know exactly what to do: confront the Russians with American and allied policies designed to check their ambitions across the board.

As Russian President Vladimir Putin tries to redraw the map and establish a sphere of influence through bullying his neighbors and violating their sovereignty, Western states need to rethink their policy agenda to ensure that Russia understands that aggression has a significant cost. Key Western states need to shape new strategic realities to which Russia must adjust in order not to be marginalized in the global competition.

Case in point: Now is the time to end U.S. dependence on Russia for our space policy.

In the 1990s, relations with Russia were much better, and the United States was reducing its defense budget. In this context, the Clinton administration decided to rely on a rocket engine called the RD-180, designed and manufactured by a major Russian aerospace company and defense contractor, NPO Energomash, in launching U.S. military and intelligence satellites. At the time, officials promised that the Russians would not be put in the position of obstructing the U.S. “critical path” to space.

One of the key reasons they were able to offer such assurance was the plan at the time was to move the RD-180 assembly line to the United States. But because of “cost considerations,” the line stayed in Russia and with it, the potential for dependency.

The dependence on Russia is ongoing. The United Launch Alliance, a joint venture between Boeing and Lockheed Martin, has an exclusive, no-bid $11 billion Air Force contract to transport critical American military and intelligence assets into space. ULA recently purchased two new RD-180s, and three more engines are expected to be delivered later this fall. By 2017, ULA is expected to purchase 27 more Russian-made engines.

This dependence on Russia exposes the United States to enormous risk. The Kremlin has the luxurious choice of selling to the United States and funneling the profits back into its own military capabilities, or simply cutting off a technology that’s central to America’s defenses.

The Kremlin appreciates this advantage. Deputy Prime Minister Dmitry Rogozin, whose portfolio includes aerospace and defense, has mocked the United States on Twitter, writing: “I suggest the U.S. delivers its astronauts to the ISS [international space station] with a trampoline.”

Some lawmakers acknowledge this dangerous dependence and have sought to fund the development of an alternative to the Russian engine next year. This is a good long-term move.

But it ignores the fact that defense officials could open up the bidding process for rocket launches right now. Currently, this process is completely monopolized by the United Launch Alliance, even though several private American companies have demonstrated their ability to conduct many of these missions.

President Reagan understood this dynamic perfectly when he focused on making sure his Department of Defense had an effective office of Mobilization Planning and Requirements. That was the office responsible for ensuring that the United States could meet all of its defense needs without relying on anyone else.

Reagan understood that space was a critical domain. Dependence on the Russians for our ability to launch rockets would have been completely out of the question then, as it should be now.

Ed Timperlake served in the Reagan administration, where he was the principal director for the office of Mobilization Planning and Requirements in the Office of the Secretary of Defense. Robbin Laird is a national security analyst and the author of several books on the Cold War. They work together on Second Line of Defense, a leading defense analytical website.