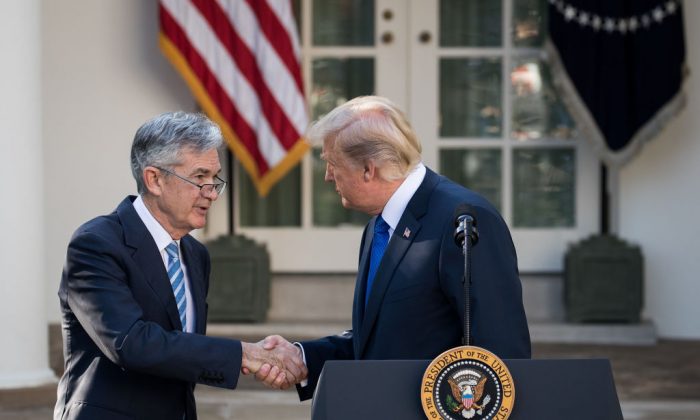 President Donald Trump (R) shakes hands with his nominee for the chairman of the Federal Reserve Jerome Powell during a press event in the Rose Garden at the White House, in Washington on Nov. 2, 2017. (Drew Angerer/Getty Images)
Economy

The New Fed Chair: How Much Does He Matter?

Powell has a different background than his predecessors, but will continue with the same policies during the next financial crisis
By Valentin Schmid

For decades, the Federal Reserve (Fed) has run not on a gold standard but on a Ph.D. standard. Academics like Ben Bernanke and Alan Greenspan thought they could manage the most complex and most important price of the market economy—the interest rate—with a few mathematical equations.

If confirmed by the Senate in early 2018, President Donald Trump’s nominee, Jerome Powell, will succeed the current chair, Janet Yellen, Ph.D. Powell is a trained lawyer who made a career in investment banking, private equity, and public service and has been serving as a Fed governor since 2012.

So the 64-year-old Powell could be different because he has had more practical experience in business and government than Alan Greenspan, Ben Bernanke, and Yellen, who, apart from their time with the Fed, have been academics.

“Powell is a Wall Street guy. He thinks about banks and investors,” said Christopher Whalen, the chairman of finance consultancy Whalen Global Advisors. “The alternative candidate, John Taylor, is a model builder. We don’t need another model builder. With Powell, it could be a more interesting conversation.”

Judging from Powell’s work and speeches since 2012, he will simply continue the Fed’s very slow path toward normalization of interest rates after almost a decade of extreme monetary stimulus.

And although the spotlight is on Powell, the powers of the chairman of the Fed are limited by the statutes of the Board of Governors, which has to reach a consensus regarding monetary policy. This is the reason we see few dissenting votes, often only one or two for each of the eight annual meetings. “When the time comes for the board to act or not to act, the board is going to take the decision,” said Whalen.

When push comes to shove, and the Fed needs to take action again, he and the board will go by the same playbook his Ph.D. colleagues have gone by before him.

In fact, the chairmen of the Federal Reserve were somewhat obscure and less known by the public until Paul Volcker—who didn’t have a doctorate in economics, only a master’s degree—came along and jacked up interest rates to an unbelievable 19.10 percent in 1981.

With his towering height of 6 feet 7 inches, Volcker was an outsized presence, and he ushered in the era of famous Fed chairs. However, only his successor, Greenspan (chair from 1987 to 2006), would reach rock-star status, due to increased media coverage of congressional hearings as well as the almost seamless, uninterrupted economic expansion seen during his tenure.

Bernanke continued to be the face of the Fed on TV during the Great Recession of 2008, and he and Yellen (whose term began in 2014) got even more media coverage when the Fed started, in 2011, to hold four press conferences per year after meetings.

When Push Comes to Shove

So in spite of the Fed chair’s limited power within the Fed’s governing structure, Powell will get the same attention and scrutiny as his predecessors.

However, when push comes to shove, and the Fed needs to take action again, he and the board will go by the same playbook his Ph.D. colleagues have gone by before him.

In 2012, writing on what was then the latest round of easy money (in the form of quantitative easing), fund manager Paul Brodsky said, “After professionally watching Fed chairmen cajole, threaten, persuade, and manage sentiment in the markets since 1982, we argue this latest permutation is understandable, predictable, and, for those willing to bet on the Fed’s ultimate success in saving the banking system (as we are), quite exciting.”

He argued that the Fed’s congressionally mandated objectives of maintaining price stability and full employment are secondary to keeping the banking system solvent.

Given that the Federal Reserve System is owned by its private member banks, this analysis is not too far-fetched, and born out by history.

Whenever a financial crisis threatened the banking system (that is, the Federal Reserve System), the Fed and its chair would do whatever it took to save it from collapsing.

Greenspan oversaw the bailout of savings and loans in the early 1990s as well as of hedge fund Long Term Capital Management (LTCM) in 1998, both private-public initiatives greased with Fed liquidity, loan guarantees, and lower rates. The bailouts led to what economists call moral hazard, in which participants think they can take excess risk because they will be bailed out.

“When LTCM was rescued, there was a general thought, ‘Hey, these guys are on the job if we screw up. They’ve got our backs,’” said Barry Ritholtz, chief investment officer at Ritholtz Wealth Management.

Easy financial conditions enabled the tech bubble of the late 1990s, and Greenspan again juiced the markets after the tech bubble popped and the economy suffered a relatively mild recession in 2001.

This led to another round of moral hazard and the subprime bubble, which popped in 2007, and in turn led to a real financial crisis and a harsh recession in 2008–2009.

After taking over in 2006, it was Bernanke’s job to announce zero interest rates and quantitative easing programs, and to broker various bailouts for insolvent banks by other banks or the federal government.

Contrary to the Fed’s narrative, the banking system could have been restructured in a different way, one that would lead to less moral hazard in the future.

“Let’s use Bank of America as an example. Bank of America gets nationalized, which really means Uncle Sam provides debtor in possession financing. This is really what happens normally with small companies. Someone who takes them out of bankruptcy gives them some operating money to keep functioning. The equity gets down to zero—senior management out the door. There is certainly a layer beneath, which can get promoted without a problem,” said Ritholtz.

In comparison, Yellen’s job was relatively easy: She just had to make sure rates didn’t rise too quickly for the stock and bonds markets to crash and hope there would not be an external shock (for instance, China) on her watch that would push the fragile system over the brink. If nothing happens by January 2018, she will have made it.

Unfortunately for Powell, he will be in the hot seat when the next recession or financial crisis hits, and hit it will. Then his background in business will cease to matter, and he will continue the unofficial Fed policy of keeping the banking system afloat, just like his predecessors.

Fund management firm Incrementum AG writes about the predictable Fed actions in the case of a recession in one of its reports. “The knee-jerk reaction by the government and the Fed would definitely comprise renewed stimulus measures in order to arrest the downturn, which implies a U-turn in monetary policy,” the firm said.