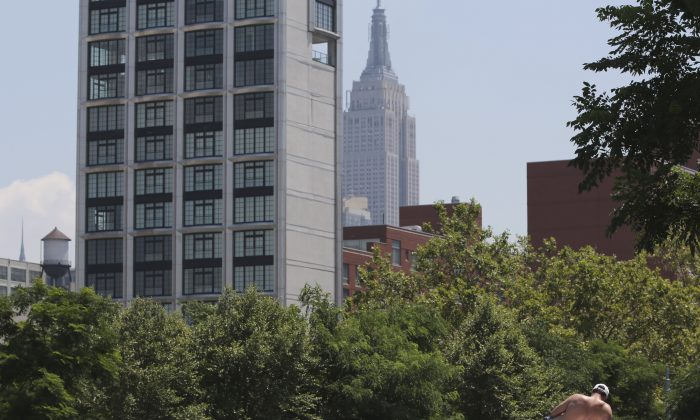 The New ‘Central Park’ of the Lower West Side

NEW YORK—Hudson River Park, one of New York City’s most beloved parks, is unlike any other in the city as none of its budget comes from the city. Despite being the destination of 17 million people a year, the park is just 70 percent complete. Its future depends on how development can fund the remainder of the park.

Beginning next year, discussions between park managers the Hudson River Park Trust and the communities lining the waterfront strip will determine how best to proceed.

While much of the activity at the park occurs during the warmer summer months, some enjoy a snowball fight or two along the waterfront during the colder weather that is now upon the city.

“Snow is a happy time for people in the park,” said Madelyn Wils, CEO of the Hudson River Park Trust.

Year after year, the park’s visitors increase as the piers are built out and developments move closer and closer to the water. This past year, the audience for the park’s programming increased 40 percent, Wils said.

The 550-acre park spans from Chambers Street to West 59th Street, running through a number of neighborhoods.

About 30 percent  of the recreational portions of the park—areas along Tribeca, the Meatpacking District, and the most northern part of the park—have yet to be completed.

Some commercial nodes are still in progress as well. For example, Pier 57, dubbed the “SuperPier,” is in progress and plans to house start-ups, pop-ups, and new talent. Pier 26 in Tribeca has the Estuarium for research and education planned, along with an additional boathouse and the restaurant coming some time around the summer. Pier 40, which once brought in the most revenue, has yet to find a commercial developer.

“Pier 40 is still not resolved and it’s our largest issue,” Wils said.

There is still the misconception that the park is publicly funded or run by the city or state. A study conducted by Audience Research & Analysis for the Friends of the Hudson River Park earlier this year found about half the visitors thought it was a Parks Department-run park, and 4 in 10 assumed it ran on public funding.

Two years ago, the Trust and Friends of the Hudson River Park came to an agreement for Friends to serve as the primary fundraiser. Until then, almost everyone using the park had thought it ran on public funds, Wils said.

The Hudson Trust has asked Friends to get to a point where the organization is able to raise $3 million annually, and then take on capital operations.

“We are self-funding, and that’s very challenging,” Wils said.

So when Gov. Andrew Cuomo signed legislation allowing the park’s air rights to be transferred a block over from the water’s edge and sold, it was a relief.

“Frankly, it’s the only likely way we’ll get the money to finish the park at this point,” Wils added. There is a pre-ULURP (Uniform Land Use Review Procedure) study being conducted to determine exactly how many square feet will be created. The Hudson Trust is meeting Community Boards 1 and 4 regarding transfers in January, and Community Board 2 in February.

There aren’t many sites left along the 5-mile stretch—exactly how many remains to be determined by the study—but the waterfront area has been very attractive to developers.

“Being able to look out at the water is a very special amenity,” Wils said—and one developers are taking full advantage of in marketing materials.

“Property values have gone up tenfold on the west side here and a large part of why they’ve gone up is attributed to the park,” Wils said, referencing an economic study the Trust is finishing up.

New York City has more waterfront area than any other city, but years ago waterfronts were mostly industrial areas.

“Back in the days of industrial development, cities were built inside out, meaning the most valuable real estate was in the center of the city—thus, Fifth Avenue, et cetera,” Wils said. The waterfront had been busy with industrial commerce, but dirty.

Now the waterfronts that are still industrial have been cleaned up, and the majority has been adapted for other uses. The SuperPier, for instance, is trying to reinvent the mall and capitalize on local creativity.

And so much of the development interest is thanks to parks.

“If you walk down West Street 13 years ago all you would have seen were abandoned manufacturing buildings,” Wils said. “Neighborhoods, whether it’s Tribeca or the West Village or the Meatpacking District or Clinton or Chelsea, have moved over where you would have never seen them past 10th Avenue, to the West Side Highway, and it’s because of the park.”

Wils succeeded Connie Fishman as the president and CEO of the Hudson River Park Trust in 2011, but was involved in the park long before that.

“As a parent, you look for good schools, and the second thing that you look for is a place to play for your kids,” said Wils, who raised three sons in Tribeca. “I spent a lot of my time 25 years ago finding some park space downtown.”

Now Hudson River Park is the “Central Park of the Lower West Side,” Wils said. It is also the area with the fastest growth in families in Manhattan.

“There is something about being near the water that has always drawn people,” Wils said.