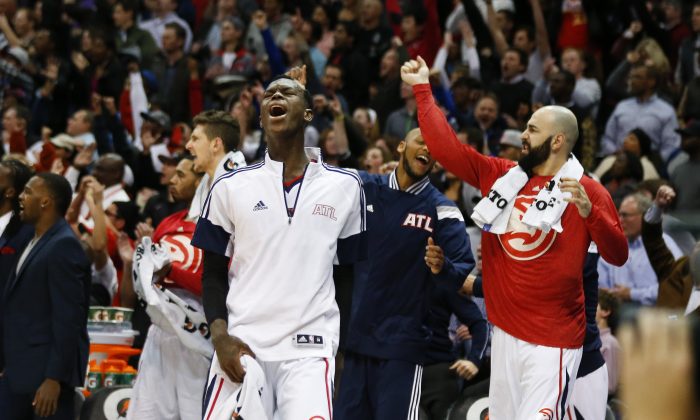 Atlanta Hawks guard Dennis Schroder, front, reacts after an Atlanta basket late in the second half of an NBA basketball game against the Portland Trail Blazers on Friday, Jan. 30, 2015, in Atlanta. Atlanta won 105-99 and stretched its winning streak to 18. (AP Photo/John Bazemore)
NBA

The NBA’s Two Best Teams Are Playing on Friday Night

The two best teams in the National Basketball Association so far this season are facing off on Friday night.

The Warriors, 39-8, have annihilated most of their opponents with almost unbelievable depth and their star backcourt Klay Thompson and Stephen Curry, who after Curry’s 51-point outburst on Wednesday night are now the first teammates to both score more than 50 points in the same season since the 1994-95 season.

The Hawks, 41-9, reeled off a 19-game winning streak that spanned across more than a month, earning three All-Star berths, and only got taken down by the Anthony Davis-led Pelicans. With a win over the Wizards on Wednesday, a new potential streak has started.

The game will be the first time teams with a single-digit number of losses have played this late in the season since the Cavaliers and Lakers played on February 8, 2009, according to the Elias Sports Bureau. For some reason, the game will not be broadcast nationally. It will be available on local stations or NBA’s League Pass.

Some say the game could be a preview of the NBA finals, with the Hawks now predicted to reach at least the second round of the playoffs and the Warriors among the favorites to make it out of the brutal West. The latest championship odds from Bovada have the Warriors on top with 7-2 odds. The Cleveland Cavaliers (15-4) and San Antonio Spurs (7-1) are the only other teams ahead of the Hawks (15-2).

The loser of this game will get a chance for revenge–the teams will have their only other meeting this season on March 18 in Oakland.