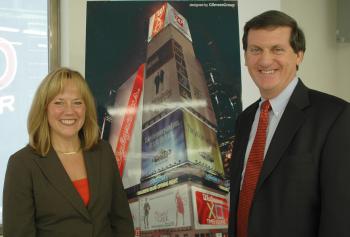 WALGREENS RETURNS: Kim Feil and Craig Sinclair pose in front of a rendering of what their new giant LED sign will look like at night in the heart of Times Square. (Jonathan Weeks/Epoch Times)
US

The nation’s largest electronic billboard lit up the south intersection of Times Square Thursday night at 8 p.m. The newest beacon of the Times Square night lights, installed by Walgreen’s, is the type of sign commonly called a “spectacular” and works basically the same way as any of the other large, animated billboards on Times Square. Millions of LED lights make up a large screen, like pixels in a computer screen.

“We’re not just here to have a big sign,” said Walgreens chief marketing officer Kim Feil, “But to support the neighborhood and the people who work here.” “The exposure and the ability to serve is what our brand stands for.”

“The sign’s content will be rich and varied, it will be bold, it will be dynamic,” said Walgreens vice president of advertising Craig Sinclair.
“This store represents a significant milestone in our efforts to a stronger presence in New York City” said Walgreens President Greg Wasson. The Times Square store is the 11th Walgreens to open in Manhattan; there are 53 spread across the five boroughs.

The company expects to have 1.6 million people view their sign’s advertisements daily. “This sign represents a tremendous opportunity to catapult Walgreens brand among the most recognizable icons in the world” said Wasson.

The location is in the background of the famous picture of a sailor kissing a nurse after coming home from World War ll; it was a Walgreens then, too. It is also the site for the New Years Eve ball-drop, which might make it worth the rent. In an interview with Reuters, Wasson declined to disclose how much the location was costing the company. He did say “If you look at the entire space and compare it to the rest of Manhattan, it’s pretty comparable.”

The massive display was designed and built by Gilmore Group, a strategic brand consultant. The software and hardware to operate the spectacular were provided by D3 LED, who claims that the sign has unrivaled high-resolution graphics. D3 LED is responsible for the M&M World Displays and the ABC Super Sign sign, both in Times Square.