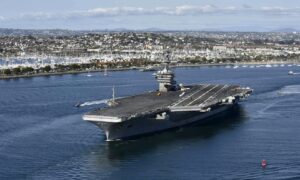 Preparing for a Future Biological Disaster
0 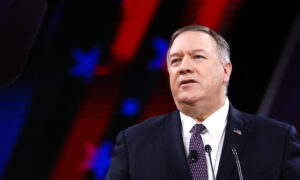 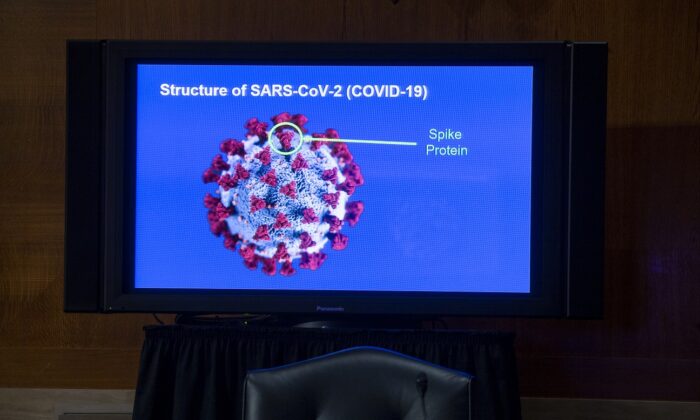 A monitor depicts the structure of SARS-CoV-2 during a Senate Health, Education, Labor, and Pensions Committee hearing to discuss vaccines and protecting public health, in Washington on Sept. 9, 2020. (Michael Reynolds/Pool/Getty Images)
Viewpoints

Are some generals in China or Russia whispering in the ears of their leaders that now is the time to strike?

China is claiming that it’s tested a COVID-19 vaccine on hundreds of thousands of people without a single infection and no side effects. Meanwhile, Russia has released its own vaccine called Sputnik V.

What are the potential national security implications if some countries have a vaccine and others don’t?

The “Sputnik V” was developed by the Gamaleya Research Institute in coordination with the Russian defense ministry. It’s based on a proven vaccine against adenovirus—the common cold. It’s supposed to protect for two years; China claims immunity from its vaccine lasts for three years.

The timetable for the vaccines’ full deployment is unclear. Reports from China say by the end of the year, while in the Russian case, testing is incomplete. The Philippines has announced it will start a trial the Russian vaccine in October, but full deployment there won’t be until mid-2021.

No matter what the timetable, and providing that neither the United States nor its allies are successful, do Russia and China have powerful leverage that can be used against the United States and its friends? How would they use that leverage? What are the military implications?

At the start of the nuclear age, when the United States was the only country in the world with atomic weapons, it’s worthwhile to recall that there was a great danger the U.S. side might use them preemptively, in one case against Russia, in another North Korea, and still another China.

Gen. Curtis LeMay, the second chief of the Strategic Air Command, proposed in 1949 that the U.S. Air Force plan to destroy 70 Soviet cities in 40 days with 133 atomic bombs, causing up to 2.7 million deaths and another 4 million casualties.

By 1953, Air Force Gen. James Doolittle proposed giving an ultimatum to the Russians, and if they rejected it, to use atomic weapons to destroy them; President Dwight Eisenhower rejected the proposal.

During the Korean War, the Joint Chiefs of Staff and Gen. Douglas MacArthur not only considered but put into motion a plan to use atomic weapons against North Korea, which by that time had almost pushed the allies off the peninsula. B-29 bombers were moved to Guam along with 10 atomic bombs. But President Harry Truman decided not to transfer the fissile weapon cores to Guam, leaving the B-29s without usable atomic weapons.

The worst moment probably came during the Cuban missile crisis in 1962 when, in response to the installation of operational nuclear missiles in Cuba, the United States launched a large number of strategic bombers carrying nuclear weapons, readied its land-based and sea-based nuclear strike missiles, and put hard pressure on the Soviet Union to pull its nuclear weapons out of Cuba.

This was the only time the United States raised its alert status to DEFCON 2 (Defense Condition 2). Normally, it’s set at DEFCON 5, the lowest state of readiness.

The above cases suggest that military planners thought they had an advantage and wanted to exploit it by using atomic and later, hydrogen weapons.

In the book “Defending Against Biothreats: What We Can Learn from the Coronavirus Pandemic to Enhance US Defenses Against Pandemics and Biological Weapons,” my wife, Shoshana, and I wrote the chapter “The Future of Biowar: What the Bad Guys Have Learned and How to Combat It.” Here are a few of the points we stressed:

1. A virus can delay, repurpose, or simply halt military operations, enabling a potential adversary such as China or Russia to take advantage.

There is plenty of evidence supporting the first point. The most dramatic example is what happened to the USS Theodore Roosevelt, a Nimitz-class, nuclear-powered aircraft carrier that was forced out of service for months. Just recently, Britain’s new aircraft carrier, HMS Queen Elizabeth, scheduled to go on a training mission, was halted in port at Portsmouth, because of COVID-19 infections.

2. Producing detection systems, vaccines, and effective treatments is time-consuming and uncertain, with the distribution of such solutions adding to logistical burdens and social anxiety.

In any case, all these steps take months, if not years, and therefore, aren’t going to inhibit the use of biowar under real conditions. This means that other deterrents are badly needed. Right now, there is none that specifically addresses a biowar challenge.

3. Hostile states use disinformation, denial, and deception to hide responsibility while, at the same time, seeking significant political, economic, and military advantages in the midst of a crisis.

Misinformation will always be part of the Great Game (as it always has been). The United States has to be forthright in explaining to its own people and to its allies about what is happening.

When it came to COVID-19, U.S. leaders were split and largely incapable of getting a clear counter-message across. This doesn’t bode well for operations in the event of a biowar event. U.S. scientists who work for the government have to get in alignment with government policy and not pursue agendas that undermine the effort of top leaders in assigning blame if a hostile state uses biowar.

This is all-important because biowar is war, even if it is masquerading as unintentional happenstance. Unfortunately, the first U.S. exercise in handling a biowar threat has largely been a disaster caused by conflict between government scientists and government leaders.

4. The Pentagon was totally unprepared to deal with COVID-19. The Navy order for all ships to stay at sea and not return to port because of infections on board meant that the Navy would have to find a way to supply the ships and deal with a spiraling medical crisis. The Pentagon and the U.S. military services need to find ways to secure effective fighting forces under pandemic conditions.

One step would be to pre-position testing kits that are broad enough in application to handle most possible bio-threats. Another is to make sure there is enough decontamination equipment. New consideration must be given to ventilation and air purification, especially in close environments such as ships, submarines, and aircraft.

A particular vulnerability is the shift to telework in the Pentagon, which sounded like a good idea but multiplied the risk of compromising operations because of cybersecurity vulnerabilities. The department has consistently failed to take into account that virtually all its handheld and laptop devices, as well as its desktop computers and local area networks, contain significant Chinese components if not entirely Chinese manufactured.

The department hasn’t revealed how many teleworker communications may have been compromised during the pandemic.

The only solution to this is to replace vulnerable devices, internet of things included, and some defense goods that use commercial computers and circuit boards. There is no current plan to do so. This deficit multiplies the risk to U.S. security in unacceptable but preventable ways.

A bigger issue is whether possibly hostile leaders start to think that a biowar scenario is a legitimate part of warfare and can work. Just as Air Force generals and the Joint Chiefs of Staff wanted to use atomic bombs when they thought they could exploit the advantage they then had, it was civilian leaders that tamped down their enthusiasm.

In non-democratic states, the line between civilian and military is perhaps more blurry or at least opaque. Are some generals in China or Russia whispering in the ears of their leaders that now is the time to strike?